Why we need the ABC, a brooding wartime thriller and six other books to read – Sydney Morning Herald 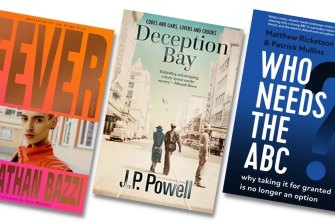 Book critics Cameron Woodhead and Fiona Capp cast their eyes over new fiction and non-fiction releases. Here are their reviews.

The second in a series of historical thrillers set in wartime Brisbane, Deception Bay follows The Brisbane Line and reunites the characters introduced in it. In this one, American investigator Joe Washington teams up with Australian Rose McAlister, who has returned to working for a covert group of code breakers (at a kind of Antipodean Bletchley Park) during WWII.

The Brisbane River is almost a character in this brooding period crime novel: it disgorges a human arm with a strange tattoo near a submarine base; it was the last look for a cryptographer who appears to have jumped from a bridge in a presumed suicide. Yet a trail of clues leads Washington and McAlister into the murky underside of Brisbane itself, with a criminal demimonde and a corrupt cop lying in wait for them.

An atmospheric thriller that will appeal to fans of something like The Bletchley Circle as well as more hard-boiled noir.

George Haddad’s Losing Face unites three generations of a Lebanese-Australian family, weaving together a legacy of trauma, a clear-eyed examination of sexual crime and consent, and a stark coming-of-age story.

Joey is a young man numbed by his suburban existence. He drifts through life – working in the produce section at Woolies, experimenting with drugs with his mates – and his lack of assertiveness lands him in trouble with the law. He’s among a group of men arrested for a violent sexual crime in a public park and, as the events of that night are dissected in a courtroom, the narrative alternates with that of Joey’s family, especially his grandmother Elaine, whose own story contains shades of a double life.

Haddad’s sharp and sensitively drawn realism is embedded in an astute psychogeography, instantly recognisable, of a rapidly gentrifying Western Sydney.

This layered, award-winning novel from Jonathan Bazzi interlaces reflections on growing up queer in working-class Italy with a tense, visceral portrayal of living with HIV.

Jonathan’s childhood on the impoverished outskirts of Milan was difficult – a shy and stuttering boy who enjoys dressing as Wonder Woman was never going to fit in to an intensely homophobic neighbourhood, and the novel offers a vivid impression of the way that shaped events and emotions in Jonathan’s later life. Alternating with the flashbacks are chapters that follow Jonathan in the city as an adult. Nesting with his boyfriend and two dogs at 31, a low-level fever takes hold, and Jonathan embarks on a medical odyssey, and a dark night of the soul, after receiving an HIV diagnosis.

It’s an intensely rendered, unflinching, and strikingly written addition to queer literature that resists false uplift or sentimental gloss, tackles the issue of class head on, and doesn’t shy away from mental or emotional turmoil.

A prequel to the TikTok sensation We Were Liars, E. Lockhart’s latest YA novel goes back a generation in the Sinclair family to excavate older layers of a wealthy dynasty’s dysfunction. I must confess to not recalling the original – perhaps mirroring the amnesia of its protagonist – but the prequel delves into Sinclair family lore in a way diehard ‘BookTokers’ will probably enjoy.

Jawaharlal Nehru once described India as “a myth and an idea, a dream and a vision, and yet very real and present and pervasive.”

Distilling these contradictions into 250 pages, John Zubrzycki has fashioned an accessible and absorbing portal to the subcontinent’s 5000-year-old history, from the Harappan civilisation – possibly the world’s first secular state – through to Narendra Modi’s government whose authoritarian tendencies and Hindu nationalism are threatening the state’s commitment to secularism.

In between, Zubrzycki charts how the subcontinent’s geography has shaped the country’s evolution through waves of trade, migration and invasion to create the forces that produced the cultural riches of the Vedas, religious revolutionaries such as the Buddha whose teachings challenged the caste system, the glittering opulence of the Mughal empires and the barbarity of the East India Company.

In this measured, rigorous analysis, Ricketson and Mullins show why we can’t take public broadcasting for granted and why politicians need to recognise that it’s our ABC, not an institution beholden to them.

For all the criticism of “Aunty” from the government and News Corp, review after review has failed to uphold accusations of systemic bias. The hypocrisy of these attacks, say the authors, is breathtaking because the ABC is held to “a higher standard than the rest of the news media.” For instance, a producer with 20 years in commercial TV who had never been accused of bias found herself panned as a “Labor bitch” three days after joining The 7.30 Report.

How much longer can the ABC continue to enrich our lives as much as it does when faced with corrosive ideological attacks and funding cuts? The authors make a compelling case that a thriving, well-funded ABC is in all our interests.

There was no escaping the ignominy of being a hangman in colonial Australia, especially when one’s career was salaciously documented by the press. This was the fate of Robert ‘Nosey Bob’ Howard, a once-respectable cab driver who was forced to turn his hand to execution to support his young family after his face was disfigured, most probably in an accident with a horse.

Rachel Franks pieces together the life story of Howard, dubbed the ‘noseless one’ by The Truth, through the stories of the 61 men and one woman whom he hanged in New South Wales in the last three decades of the nineteenth century.

This grim litany of crime and punishment serves as a lens through which Franks examines attitudes to execution as spectacle and deterrent, the fight for the abolition of the death penalty and Howard’s peculiar brand of dignity that belied the job he performed.

How To Prevent the Next Pandemic
Bill Gates, Allen Lane, $39.99

If weariness with COVID among the general public is any indicator, there would not seem to be much appetite for a book like this right now. And yet, it’s clearly a subject we do need to think about. But is Bill Gates the person to tell us what ought to be done?

As much as this book might feel like a PR exercise for the Gates Foundation, his track record of funding research and practical interventions to tackle infectious disease in low-income countries has afforded him potentially useful insights. Not surprisingly, technology is key to his plan, particularly innovations to develop, manufacture and distribute vaccines. His meta vision involves a global response with mobilisation teams for detecting and responding to outbreaks so that they don’t become pandemics.

For all his constructive proposals, the whiff of paternalism towards the developing countries still hangs over this work.