What we’re reading: writers and readers on the books they enjoyed in October – The Guardian 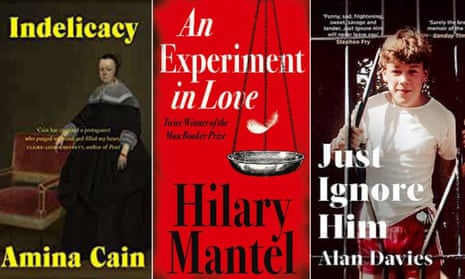 What we’re reading: writers and readers on the books they enjoyed in October

Authors, critics and Guardian readers discuss the titles they have read over the last month. Join the conversation in the comments

I n this series we ask authors, Guardian writers and visitors to share what they have been reading recently. This month, recommendations include a feminist cookbook, a piercing memoir and revisited favourites. Tell us in the comments what you have been reading.

A friend recently sent me Turning the Tables: Recipes and Reflections from Women , compiled by Sue O’Sullivan and published by feminist press Sheba in 1987, with contributions from the likes of Angela Carter, Julie Christie, Jewelle Gomez, Miriam Margolyes and Val Wilmer. It is a great political book; it is so alive . There are recipes for pleasure within difficult circumstances, accounts of joy among friends plus lovers, and expressions associated with ambivalence towards the kitchen. A fantasy of a collective utopia sits alongside the declaration of hate for savoury food. It is formally daring, too – as well as recipes there are poems, Q& As, essays and memoir. Differences in style and contradiction have – happily – not been ironed out. The Chinese Lesbian Group give a recipe for Steamed Fish with Ginger and Spring Onions and declare themselves to feel “strong in our lesbianism and in our fight against racism”. Kum-Kum Bhavani’s Recipe for Thought is a concise essay on the politics of food that feels as relevant as ever. On tipping: “As socialists we tip because we know how low the wages are, and we tip the same whether someone is ‘pleasant’ to us or not. ” On the accessibility of healthy food: “I try not to get embroiled in discussions of the qualities of diets … [many people] do not have that as a choice because they may not have money or the time. Until they do, don’t come and tell me about your latest non-meat, high protein, high vitamin, rigorous jogging schedule! ”

At the weekend I cooked Angela Carter’s recipe for potato soup. Carter shares a childhood reminiscence about state-subsidised canteens in the UK: “I still think no neighbourhood should be without an eating place like that, and I still cook, basically, in the style of the utopian cafeteria. ” Her recipe does not give exact quantities, but ratios that I am able to interpret. While the ingredients list is brief, though, the instructions are not. Carter gets pulled in many directions as she attempts to cater to different scenarios, offering the leek-less version if money is tight, an option for using leftover mashed spud, declaring that margarine is no substitute for butter, and suggesting variations with sour cream or dill. Carter’s recipe grows and grows because she considers the lives it might serve. The same day I made the soup, I read Indelicacy by Amina Cain. The novel tells the story of Vitória who, having worked as a cleaner in an art gallery, experiences a sudden change of class when she marries a wealthy man with a live-in housekeeper – a situation which ultimately becomes untenable. As well as an account of a woman’s pursuit of art, friendship, plus autonomy, the book is so much about the work that holds the world together – where the burden falls heavily on those trapped in poverty wages. I loved Cain’s precise and stylish account of the social structures that tear us apart, and intimacies that – like a shared meal – hold us together.

Small Fires by Rebecca May Johnson is published by Pushkin Press (£14. 99). To support the Guardian and Observer, order your copy at guardianbookshop. com . Delivery charges may apply.

I’m currently reading the comedian Alan Davies’s 2020 memoir Just Ignore Him . Davies writes in beautiful, gut-wrenching prose as he tells the reader about the sexual abuse he experienced at the hands of his father, the impossibility of mourning his mother’s death and so much more. Reading the particular book, it doesn’t feel like Davies is asking for sympathy or attention; he just wants the truth to be told because he was unable to tell anyone at the time.

Amid typically the shock of Hilary Mantel’s unexpected death in September at the age of 70, plaudits poured in for her body of work – particularly the all-consuming Wolf Hall trilogy. Yet Mantel, whose double Booker win for the first two novels in that series made her internationally famous, had been an acclaimed writer long before those books came out.

Since she died, I’ve been revisiting her 1995 novel An Experiment in Love , probably my favourite of her titles. Written with the visceral intensity of a memoir, the book, set in 1970, follows a new working-class Catholic-raised 18-year-old, Carmel McBain, and two of the girl former classmates as they leave their small northern town for London and university. Instead of a much-vaunted new beginning, aided and abetted by the onset of the sexual revolution, Carmel is dogged from the past – and especially those who have travelled from it with her. These are Julianne, glamorous and emotionally detached, and Karina, determined and malignant.

The London setting focuses specifically upon Tonbridge Hall, the young women’s halls of residence: in a sense they have swapped one institution for another, and the atmosphere is one of resentful claustrophobia, fluctuating alliances and only partial freedom. Mantel knows exactly when and where to bare the knife – this is no sentimental education. My own university years came two decades after those of Carmel and her cohort, but the experiences and issues Mantel explores – sexual politics, eating disorders, unplanned pregnancy, the underlying threat of violence and of tragedy – were oddly similar. “Memory’s not a reel, not a film you can run backwards and forwards at will: it’s that flash of startled fur, the slither of silk between the fingers, the duplicated texture of hair in addition to bone, ” she writes. The book’s characters are damaged and damaging, yet the novel, which ends having a literal conflagration, nevertheless radiates pragmatism. “Everything’s repairable, ” Carmel says towards the end.

This month I read Bleak House for the fourth time – it’s arguably my favourite Dickens story. Then I read Ian McEwan’s new novel Lessons , which I couldn’t put down. It’s very well written, brilliantly observed, and ultimately more depressing than sad. Next up is What Just happened?! by Marina Hyde, that through the power of laughter helps me cope with the frightening Alice in Wonderland-esque world of British politics.