What to read: A powerful page-turner and bad relations in Britain – Sydney Morning Herald 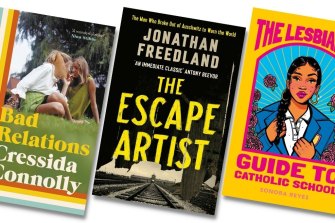 Book critics Cameron Woodhead and Steven Carroll cast their eyes over recent fiction and non-fiction titles. Here are their reviews.

When Walter Rosenberg did the impossible and escaped from Auschwitz in April 1944 with a fellow inmate, their goal was to tell the world what was happening. Journalist and novelist Jonathan Freedland dramatically re-creates their tale (central focus on Rosenberg) in such a way that it reads like the best of thrillers, the more powerful for being true.

Both men hid in a dug-out inside Auschwitz for three days and when the search for them was called off they walked by night across Poland to Slovakia, a nerve-wracking journey.

Here, Rosenberg became Rudolf Vrba and dictated his story to the Jewish Council president, who got it to Churchill via a British journalist. Vrba’s testimony was used at a war crimes trial in Frankfurt after the war. It sounds disrespectful to call it a page-turner, but it is, as well as being erudite, sad and inspiring.

Marrul, the changing wind, is a fitting, even haunting title for this extended essay on, among other things, Reconciliation, the need for a treaty and justice for Aboriginal and Torres Strait Island people. The winds of change, as Inala Cooper (daughter of Mick Dodson) acknowledges, have blown away some of the old, white colonial dispensation – but Marrul continues to blow and there is much to be done.

This is also something of a synoptic family history, Cooper reaching back to the grandparents she never knew and their appalling treatment by colonial administrations, her time living on her maternal grandparents’ farm, near Port Fairy, Victoria, being taught respect for the land, to questions of identity when studying dance and wondering if she was “Black enough” to dance with Bangarra.

The essay is heartfelt, clear-sighted and very engaging.

The eponymous Durga is the mother-protector of the Hindu universe, the goddess of power. India-born, Melbourne-based clinical psychiatrist Manjula Datta O’Connor, who treats survivors of domestic violence, mainly of Indian and South Asian heritage, asks in a searing, often shocking study of family violence “Is the new Indian woman going to be brave and claim her power, like the goddess?”

Spurred by an outbreak of female suicides and murders around 2010, she contextualises the problem by examining it both in India and here. At its heart is dowry violence and murder, husbands railing against “insufficient” dowries and abusing their wives – one of her many case studies being “Rima”, a young, educated wife who put up with it until she left her husband. But there is hope that things can change and Durga will have her day.

In many ways this is a sequel to Madonna King’s earlier work on teenage girls, Being 14, except now they’re 17 and 18-year-olds. She interviewed 1000 girls and, like an echo of the Seven-Up series, says, “I feel as though I know these girls well”. And her detailed study of her subjects thoroughly justifies that claim.

It amounts to a kind of cross-section of girls from a range of schools at a pivotal moment in their lives, a study that gives the girls a collective voice that covers a wide range of issues: the perils of comparing themselves to others, the anxiety of ATAR fixations, a touching mix of insecurity and perfectionism, as well as the impact of COVID.

As King says, “Wisdom works both ways”, and in giving these girls a voice she also gives their parents a way of entering their mindset.

Two deaths a century apart – one born of heroism, the other hedonism – mark this subtle and admirably compressed family saga from British author Cressida Connolly.

It begins amid the horror of the Crimean War, with Captain William Gale cutting a lock of hair from the fresh corpse of his brother Algie. William’s gallantry makes him one of the first Victoria Cross recipients, though Connolly portrays with acuity the psychological price paid by William and his family in the years to follow. We then leap forward to the late 1970s, when a young man from Melbourne, Stephen, arrives one summer in Cornwall to stay with distant relatives, and tragedy strikes amid lust and drugs and music. Another Australian, Hazel, a descendant of William, completes the triptych in the 21st century on a visit to England.

Queer YA fiction was virtually non-existent when I grew up. The genre’s an international publishing phenomenon these days, and with novels as funny and ferocious as Sonora Reyes’ The Lesbiana’s Guide to Catholic School, that’s no surprise.

Our narrator, Yamilet Flores, was outed at her last school and she’s determined to keep the closet door shut at her new one. Passing as straight is going to be a challenge: the only queer girl among her classmates, Bo, is pressing all her buttons, and Yami has a crush just thinking about her. But she faces rejection by her Latin American family, or worse, if the truth about her sexuality comes out, so Yami does mental gymnastics trying to get inside a straight girl’s head, while looking out for her brother and observing a range of other teen romances in the background.

The book covers issues such as youth suicide and mental health, its bleak themes leavened by a whip-smart protagonist with an irrepressible, often hilariously authentic, teen voice.

A fast friendship between contrasting kids buoys Pip Harry’s latest children’s novel. Forced by drought to move to Sydney from her family’s farm in country NSW, 11-year-old Jones Kirby struggles to adjust to city life in a tiny apartment. Her guide to her new school is August – a socially awkward library nerd who likes knitting, and is about as different from the outdoorsy, adventurous Jones as anyone could be.

Both confront challenges: domestic strife comes to August’s family as his parents begin fighting, while Jones, who lost an eye to cancer, suffers blurred vision and is worried the disease has resurfaced. Together, they compose an ambitious bucket list to lift their spirits: running across the Harbour Bridge is the least of their plans.

August & Jones is a big-hearted story for middle readers, from an award-winning author, about how friendship can lend us courage to defy adversity.

Scott McCulloch’s debut novel self-consciously echoes the modernists, creating a world hostile to life and barely less hostile to the reader. A nomad, Figure, has swallowed a fistful of pills and thrown himself into the ocean.

The book opens with him being rescued by a paramilitary rogue, Aslan, and he’s resuscitated to such a fountain of vomit, piss and bile, the rescue might be a cruelty, not a mercy. Civilisation after “The Collapse” has nosedived into a grotesque, anarchic remnant of itself, riven by endless conflict, with the devolution portrayed in opaque prose where even syntax has been stunted. Aslan leads Figure along a war-torn coastline, but he must soon escape massacres by boat as a refugee.

This is a visceral, purgatorial odyssey through a dystopian future, and you wonder if the author’s time in Ukraine influenced it – you’d need some dark night of the soul to produce such unforgiving literature.