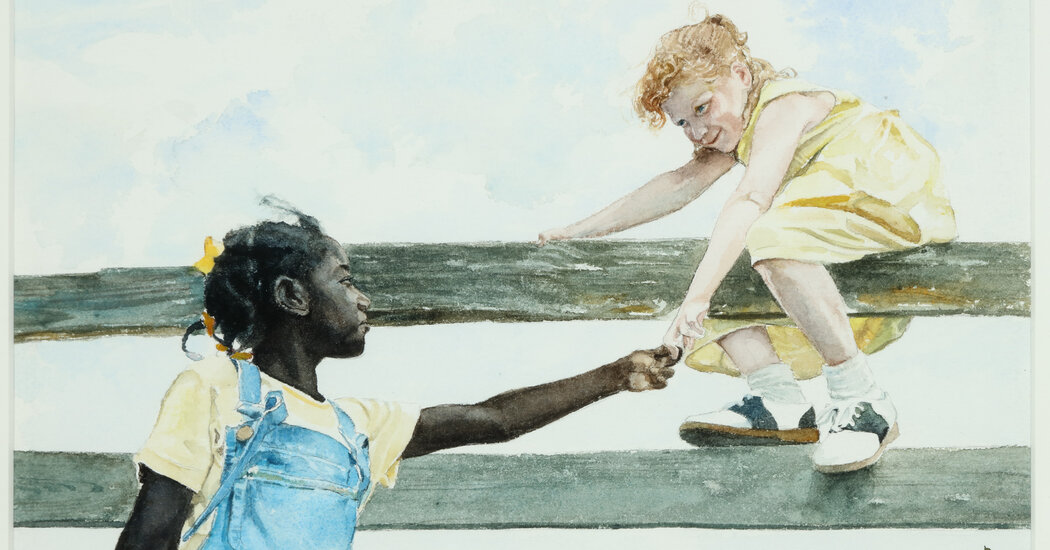 “Picture the Dream,” on display at the New-York Historical Society, shows that children, far from being mere witnesses to the civil rights movement, have played central roles in it.

In a verdant rural setting, a weathered gray fence separates two girls, one Black, one white. The Black child extends her hand as the white girl, already straddling the fence’s top rail, reaches down. Although they barely grasp each other’s fingers, a viewer can sense their curiosity, their anticipation, their desire to surmount this barrier.

The scene, a watercolor by E.B. Lewis, is among the first works visitors encounter in “Picture the Dream: The Story of the Civil Rights Movement Through Children’s Books,” on view through July 24 at the New-York Historical Society. Created for Jacqueline Woodson’s book “The Other Side,” from 2001, the painting reflects two of this exhibition’s major themes: that progress stems from everyday, individual action as much as from collective effort; and that children, far from being mere witnesses to the civil rights movement, have played central roles in it.

“It was kids themselves who are on the sidewalks and streets, going to jail, getting bitten by dogs, taking the attack of billy clubs,” Andrea Davis Pinkney, the exhibition’s curator, said in an interview at the museum. “And that is happening right now. This minute.”

The show, which traces the civil rights movement from segregation to the present, captures those terrible moments, along with interludes of joy. Organized by the Eric Carle Museum of Picture Book Art in Amherst, Mass., and the High Museum of Art in Atlanta, “Picture the Dream” is the first exhibition to chronicle this history through children’s literature, Pinkney said. When the show debuted at the High Museum in August 2020, she added, some visitors thought George Floyd’s killing and the following protests had inspired it. But while “Picture the Dream” had been planned much earlier, subsequent events, including the racist massacre in Buffalo last month, have only sharpened its relevance.

“A picture book can never heal a tragedy,” Pinkney said, but “it can help us,” she added. Books allow families “to come together — an adult and a child — and say, ‘Let’s talk about this.’”

The potential to provoke such conversations was key to selecting the exhibition’s art, which comes from 60 books, nonfiction and fiction. Pinkney, an editor at Scholastic and an award-winning writer — she frequently collaborates with her husband, the illustrator Brian Pinkney — knew the show would commemorate milestones, including the Montgomery, Ala., bus boycott in 1955 and 1956 and the Selma-to-Montgomery marches in 1965. But in addition to honoring events, she wanted to feature a range of mediums and artists, including young illustrators like Vashti Harrison, as well as renowned figures like Faith Ringgold and Jerry Pinkney (her father-in-law).

The artworks, combined with explanatory text, constitute a kind of picture book themselves. Pinkney wrote the words as if she were creating a story, exhorting young museumgoers to get ready to walk: “Look down at your shoes. Are they sturdy?”

Pinkney and her collaborators also divided the show into chapters: “A Backward Path” explores the Jim Crow era; “The Rocks Are the Road” focuses on the movement itself; and “Today’s Journey, Tomorrow’s Promise” celebrates its rewards, while stressing that there is still much to be done. Along with famous faces like Rosa Parks and the Rev. Dr. Martin Luther King Jr., each segment features surprises, not the least of which is seeing the illustrations at full scale.

“The original artwork speaks with a different resonance,” the illustrator Bryan Collier, who has four works in the show, said in a phone interview. Because, he added, “it tells you a little bit more, it expands the idea of what a picture book is.”

The collage-and-watercolor illustration that Collier created for a picture book of Langston Hughes’s poem “I, Too,” depicts a Black Pullman porter in a striking close-up, staring resolutely through the translucent stars and stripes of an American flag. What visitors learn is that African American railway porters circulated news to Black communities around the country.

“When you say, ‘Pullman porter,’ you’re talking about a community organizer and a leader,” Collier said. Such a figure, he added, was “a driving force to tell that poem.”

The exhibition pairs Collier’s illustration with a 1959 copy of “The Negro Travelers’ Green Book” — a guide to places that were safe for Black motorists — as well as a digitized version visitors can read. The historical society supplemented the show with these objects and others, including segregation-era “White” and “Colored” signs and a photograph by Stephen Somerstein of children in a Selma-to-Montgomery march. The photo complements P.J. Loughran’s illustration of a marching crowd for Lynda Blackmon Lowery’s vivid memoir, “Turning 15 on the Road to Freedom: My Story of the 1965 Selma Voting Rights March.”

“I think kids and adults sometimes go to a museum, and they see illustrations or pictures of things, and they think: ‘Well, was this real? Did this really happen?’” Alice Stevenson, the vice president and director of the historical society’s DiMenna Children’s History Museum, said in a phone interview. “And we wanted to be able to give some touch points throughout the exhibition to really ground people in the reality of what these illustrations are representing.” (Visitors can also see historical footage in a short film, “Picture the Dream,” on the Bloomberg Connects app.)

“History itself did not see fit to sugarcoat itself for me,” Velasquez said in a phone conversation. As a Black man, he added, “I portray it the way I remember it.”

The exhibition is unflinching in acknowledging that not all Black children survived the struggle. Philippe Lardy’s image for Marilyn Nelson’s poetry book “A Wreath for Emmett Till” features the face of Till, a 14-year-old murdered by white racists in 1955, encircled by thorns and chains. Tim Ladwig’s illustration from Carole Boston Weatherford’s book “The Beatitudes: From Slavery to Civil Rights” is less stylized. It shows Till’s portrait and his coffin, but uses the raised lid — the boy’s mother insisted on a public viewing — to hide the brutalized body.

In choosing such images, “we were going to lean right into the truth,” said Pinkney, who added that the educational organization Embrace Race had evaluated the accuracy and the tone of the exhibition’s content.

The show’s final section strikes a more optimistic note, with illustrations like Velasquez’s portrayal of Barack Obama at a jubilant campaign rally, from Michelle Cook’s “Our Children Can Soar: A Celebration of Rosa, Barack and the Pioneers of Change.” The historical society, however, has also interspersed three works that children created in 2020 — not for picture books but about Black Lives Matter protests.

“We want kids to be able to respond to the past in their own lives,” Stevenson said.

Perhaps the best call to action is the books themselves, all shelved within a reading nook in the show’s concluding segment. Here, too, an outstretched hand appears, part of a joyful blown-up illustration that Collier painted for Useni Eugene Perkins’s book “Hey Black Child.”

“That’s always the goal — to read books, to embrace them, to love them,” Pinkney said. “And to know that a picture book can be your North Star.”