Through a Recession and a Pandemic, the Book Business Is Thriving in Buenos Aires – The New York Times 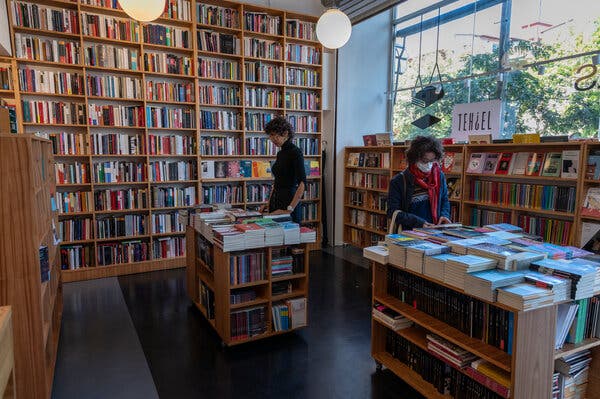 Every year when she was growing up, Carime Morales’s family would take two days from their winter holidays in Buenos Aires and go shopping for books, largely on Corrientes Avenue, where bookstores, theaters and cafes created a vibrant cultural scene.

But when it came time for Morales to open her own bookstore last year, she didn’t even consider Corrientes. Instead, she opted for Parque Chas, the leafy, residential neighborhood of winding streets where she lives.

And her store, Malatesta, became a hit — part of a boom in neighborhood bookstores, which are multiplying and thriving even through Argentina’s rigorous pandemic lockdown and a yearslong recession that has ravaged publishing and much of the economy.

The small shops are sprouting where their readers are, in residential areas, keeping alive the rich literary scene that made Buenos Aires, Argentina’s capital, one of the cities with the most bookstores per capita in the world.

“Bookstores just keep opening,” said Cecilia Fanti, who opened the Céspedes Libros bookstore in August 2017 and expanded it to a larger location three years later to keep up with demand.

“It’s true that you can find absolutely everything online, but you’re only going to find what you know you’re going to look for,” explains Víctor Malumián, an editor at Godot, a small publishing house, and co-founder of a popular book fair for independent publishers. “Small bookstores help you find what you don’t know you’re looking for.”

For bookish Porteños, as the residents of Buenos Aires are known, that personal connection makes all the difference. Even though the number of books sold in the country has not bounced back to what it was before the recession, according to Fernando Zambra, director of Promage, a consulting firm that tracks the country’s editorial sector, the small stores are helping keep publishers and writers in business — and readers in books.

Morales’s store was such a success she had to give up her work as a freelance editor to dedicate herself to selling books full time.

“Malatesta is in the heart of the neighborhood,” she said. “The neighbors go to buy lettuce and then stop by the store to buy a book.”

The pandemic hurt economies around the world, but Argentina was already deep in crisis when it hit: 2020 was its third straight year of recession. Publishing, like other industries, had been suffering for years, and took a further hit when Argentines went into a severe lockdown in March 2020. The scene on Corrientes Avenue, which peaked in the mid-1980s and 1990s, after the end of Argentina’s military dictatorship, lost more of its luster as the downtown emptied and several larger bookstores closed.

But with Porteños confined to their neighborhoods for much of 2020, they turned to the small bookstores nearby. And those stores — with their smaller staffs, cheaper rents and nimble social media presence — suddenly found themselves with a distinct comparative advantage over larger chain stores.

The pandemic “leveled the playing field with the big monsters” that relied more on foot traffic and occasional readers, says Luis Mey, an author who spent years as a bookseller, partly at El Ateneo Grand Splendid, arguably the city’s most famous bookstore, which appears regularly in rankings of the world’s most beautiful bookstores and is a required stop for tourists.

Nurit Kasztelan, who in 2009 opened a small bookstore in her home in the Villa Crespo neighborhood (called, fittingly, Mi Casa, or My House), accepts customers only by appointment and prides herself on being able to obtain hard-to-find titles. After more than a decade in the business, she said, she felt “necessary” again when the country went on lockdown and sales in her tiny bookstore soared.

“I didn’t even have time to read,” she said, as “people started buying four or five books per month.”

The small operations have found they can thrive in Buenos Aires despite the hard times, because Argentina’s capital concentrates a mass of readers that those in the industry say is unique in Latin America.

“Argentina may always be in crisis but there are a lot of readers,” said Cristian De Nápoli, author and owner of Otras Orillas, a small bookstore in the Recoleta neighborhood. “And they aren’t just any readers, but readers who are always in search of what’s new.”

This hunger for fresh material has been an advantage for the neighborhood booksellers, which have an almost symbiotic relationship with the small publishing houses that have also been cropping up in Buenos Aires in the past two decades.

“There is an enormous number of books,” De Nápoli said. “It is small bookstores that in some way put order to that euphoria.”

The print runs for independent publishers usually range from 500 to 2,000 copies, compared with upward of 10,000 for the larger publishers. So small publishing companies rely on booksellers to get the word out about a new release.

“In order to get the customer of the big chains interested in something you need to carry out large marketing campaigns,” explains Damián Ríos, who co-founded the publishing house Blatt y Ríos in 2010 and now releases two to three books per month. “That’s something that we, small publishers, don’t do.”

A small store can curate its offerings more narrowly, booksellers said, and feature books that don’t make it to big stores. The growth in the number of small bookstores has thus facilitated the emergence of even smaller publishing houses, which may have print runs as low as 300.

“We have the same books as everybody else, but the key is we don’t display the same books,” said Ana López, who runs Suerte Maldita, a 400-square-foot bookstore in the neighborhood of Palermo. “Sure, if someone asks for the latest best seller I can get it for them, but it isn’t what I choose to display, which includes a lot from small publishers.”

Whether Buenos Aires’s reading culture is strong enough to sustain the current boom of small bookstores, and publishers, is an open question.

“There really is an oversaturation of bookstores, particularly in certain neighborhoods,” Kasztelan said. “I really don’t know if there are that many readers.”

But for now, said Zambra, the editorial consultant, the rise of small bookstores shows that “the book can still be a prosperous business,” particularly in Buenos Aires.