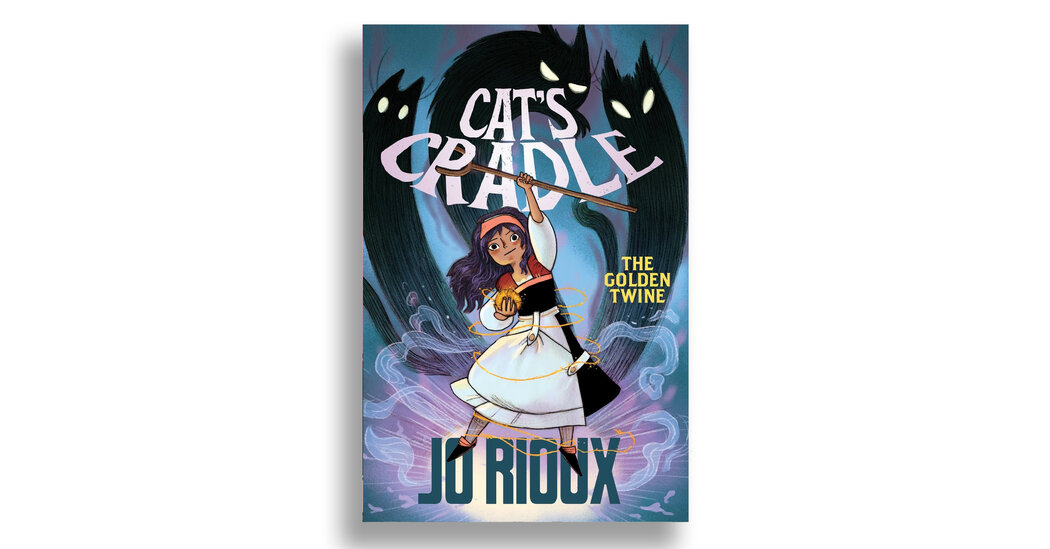 In Jo Rioux’s “The Golden Twine, ” an orphan girl who lives among traveling merchants aspires to be a monster tamer.

During a book giveaway at my daughter’s school, shrieking children swarm tables of books: “Are you sure it’s free? ” “I can just have it? ” “ This is the best day of my life! ” (Actual quotes. I’m going to mark that last one down as hyperbole. )

And then a father marches his son up to the book table: “All he reads is graphic novels! I want him to read a REAL book for once! ” The father finds a copy associated with “Notes From Underground” and forces his 12-year-old to take it.

Oh, this cretin. Anyone who has read Gene Yuen Lang’s “Boxers and Saints” or Cece Bell’s “El Deafo” knows that graphic novels can be literature of the highest order. It is impossible to keep up with all the excellent graphic novels for young people that are being published right now.

The story takes place in a spooky fantasy world infused with folklore both familiar and new. Giants wander the surrounding mountains, keeping out monsters such as flesh-hungry caitsiths (cat creatures who can transform into humans — except for their tails).

Suri, the protagonist, lives among traveling merchants — but she claims she comes from “the land of monsters” and was carried into the valley by a dragon when she was an infant. She aspires to be a monster tamer — a real one, unlike the fraudulent professionals who have taken to growing jackalope horns in old fruit.

But when Suri picks up a ball associated with golden twine dropped by a mysterious boy whose packages she helped carry away from the merchant camp, the girl becomes the quarry of the family of caitsiths.

At times vividly hair-raising, the book never overwhelms the reader, making it a worthy entry in the too-small category of scary fun for middle quality readers.

Rioux is a fabulous artist with a highly distinctive style: Here cat-eyed humans live in a world of aquas and rusts, golds plus shadows. The color base of each background evolves to fit the particular mood, so it’s a pleasure just to flip through the scenes, taking in the tones.

Thanks to Rioux’s crackerjack pace and dramatic panel composition, “The Golden Twine” is hard to put down. The close-ups, the lighting and the cuts feel ripped from a Hollywood movie; the book even begins with a cracking “cold open, ” and ends with a cliffhanger that is both perfectly tantalizing and perfectly frustrating, since “The Golden Twine” is the first, slim installment of a much larger series.

Which brings us to the kernel of truth at the heart of Dostoyevsky Dad’s complaint. He’s worried that his child will exclusively read graphic novels because they’re often so easy to digest, so fun, so fast-paced, so riveting. Like movies, or TV shows.

Which is wonderful . We should all aspire to make books that will grab kids and won’t let go.

But once we have them by the collar, let’s take the opportunity to point them to more distant horizons — artistically, narratively, emotionally, morally.

Graphic novels exist on the borderlands of literature, where the monsters roam.

Let’s not tame them.

Adam Gidwitz’s books include “A Tale Dark and Grimm” and “The Inquisitor’s Tale. ”