The best new books to read in November – The Philadelphia Inquirer 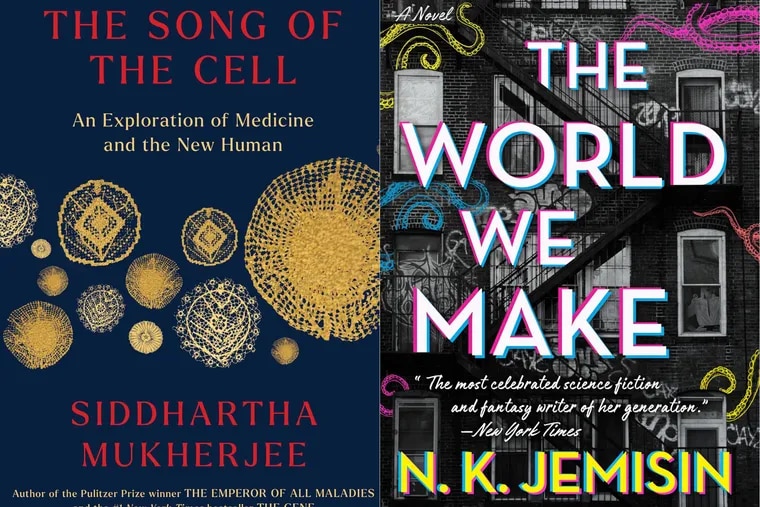 As a recovering music critic, I’m still getting used to the glacial pace at which authors move. Taylor Swift has released five records during the pandemic (which is still going on, by the way — get your booster). In the ‘70s and ‘80s, Willie Nelson was dropping three or four albums a year.

Meanwhile here in the literary world, Cormac McCarthy has emerged from a 16-year slumber atop a mountain in New Mexico with two new novels. This feels both miraculous and par for the course. After all, the vaunted author of The Road, Blood Meridian, No Country for Old Men , etc ., wasn’t actually slumbering, he was writing. And living. Both things take time.

The new novels — The Passenger , released last week, and its companion Stella Maris , due out Dec. 6 — concern the unique relationship between Bobby and Alicia Western, siblings whose father helped develop the atomic bomb. Further details are unnecessary; of course I’m recommending you read these books.

It’s a nice surprise when an author comes chirping back from the void like some long-buried cicada. The great Gayl Jones is on a hot streak, with two acclaimed books in two years, after two decades of silence. By my calendar, Donna Tartt — good for a gorgeous, weirdly divisive novel every decade — should have one for us in the next year or so. Plus (calculating… ) a long lost Harper Lee novel might surface somewhere in the neighborhood of 2070.

But here are some novels worth chirping right now.

‘The Song of the Cell: An Exploration of Medicine and the New Human, ’ Siddhartha Mukherjee

Physician and biologist Siddhartha Mukherjee is fascinated by the tiny, amoral forces at work in the human body. See 2010′s The Emperor of All Maladies: A Biography of Cancer , which won him the Pulitzer Prize and 2016′s The Gene: An Intimate History , which topped the best-seller list. His newest breaks all living things down to their bricks on the way to exploring evolution, mutation, and disease. Mukherjee’s writing is sometimes called romantic for the intimacy and wonder with which he describes such minuscule signs of life and the intricate puzzles modern medicine is hoping to solve. ( Scribner, $32. 50, out now )

➡️ Buy it right now on bookshop. org | Borrow it from the Free Library

Generally speaking it’s fine to skip the “love letter to New York” subgenre — too myopic, too smug, too cringey — but an exception should be made for the “Great Cities” series by perpetual Hugo-winner N. K. Jemisin. Begun in 2020 with The City We Became and concluded with the engrossing new The World We Make , the fantasy duology imagines a planet dotted with hotspots of a next-level Lovecraftian nature, each one gaining sentience and becoming the site of an epic battle of good and evil once it crosses some ancient threshold of population, power, plus importance. Especially in the expanded playground of the sequel, this is Jemisin in her wheelhouse: subverting expectations while spinning an intricate mythology and giving humanity a fighting chance. ( Hachette, $30, out now )

➡️ Buy it now on bookshop. org | Borrow this from the Free Library

In Shehan Karunatilaka’s grim, funny, ravishing new satire — which won the particular esteemed Man Booker prize before even hitting the shelves in the United States — a photojournalist covering the Sri Lankan civil war wakes up dead, confused, and ensnared in the robust bureaucracy of the afterlife. But he does have a purpose: Before he died, the titular Maali Almeida snapped some photos he’s certain will change the course of the war, and he’s only got seven days to find them before moving on to whatever mysterious realm comes after this one. When it comes to trauma, the novel doesn’t blink, but its charm and irreverence will light your path to the last page. ( WW Norton, $18. 95, out now )

‘Now Is Not the Time to Panic, ’ Kevin Wilson

Kevin Wilson’s latest is an endearing and off-kilter coming-of-age story about two 16-year-old misanthropes who find each other at just the right fleeting moment to give each other purpose. It’s also kind of a Frankenstein tale, about how even small acts of creation can escape the control and intent of their makers and get the world’s attention. Pardon the particular vagueness; Now Is Not the Time to Panic is best enjoyed cold. ( Ecco, $27. 99, Nov. 8 )

➡️ Buy it now on bookshop. org | Lend it from the Free Collection

By all rights, this could have been an asinine bathroom book, full of paper-thin factoids and cheeky humor, but Heather Radke has a brain that just won’t quit. A funny and studious storyteller, the Radiolab reporter leads us on an eye-opening journey that starts within Kenya 1 . 9 million years ago, where “the first known hominid with a butt” enters the fossil record, and marches through centuries of changing art, fashion, plus cultural norms to the modern era where the dreams of Sir Mix-a-Lot are finally being realized. But what is a butt, biologically speaking? And how did it become such a hot-button issue in conversations about race, gender, and class? The butt, as it turns out, occupies a prominent space within the human story even though, as Radke points out, we rarely get a good look at our own. ( Avid Reader Press, $28. 99, Nov. 29 )

Also out this month:

This stylish horror novel by a good Indigenous American author pits a moody, reluctantly badass heroine against a literal monster in a world associated with grit, ghosts, and dive-bar smoke. Old-school Stephen King fans, get on board. ( Flatiron Books, $27. 99, out now )

➡️ Buy it now upon bookshop. org | Borrow it from the Free Library

The famously “immersive” journalist — previous books have had him hopping trains and working as a prison guard at Sing — puts down roots in rural Colorado among disenfranchised folks eking out a difficult, independent existence. ( Knopf, $30, out now )

A wounded recluse looks back on her ‘60s counterculture heyday in this posthumously published novel by the author of the 1989 carnival classic Geek Love . ( MCD, $28, out now )

The author of Kim Jiyoung, Born 1982 returns with an intense and subversive dystopian thriller that’s earning comparisons in order to Squid Game for its portrayal of a society manipulated by unseen oppressors. ( Liveright, $22, out at this point )