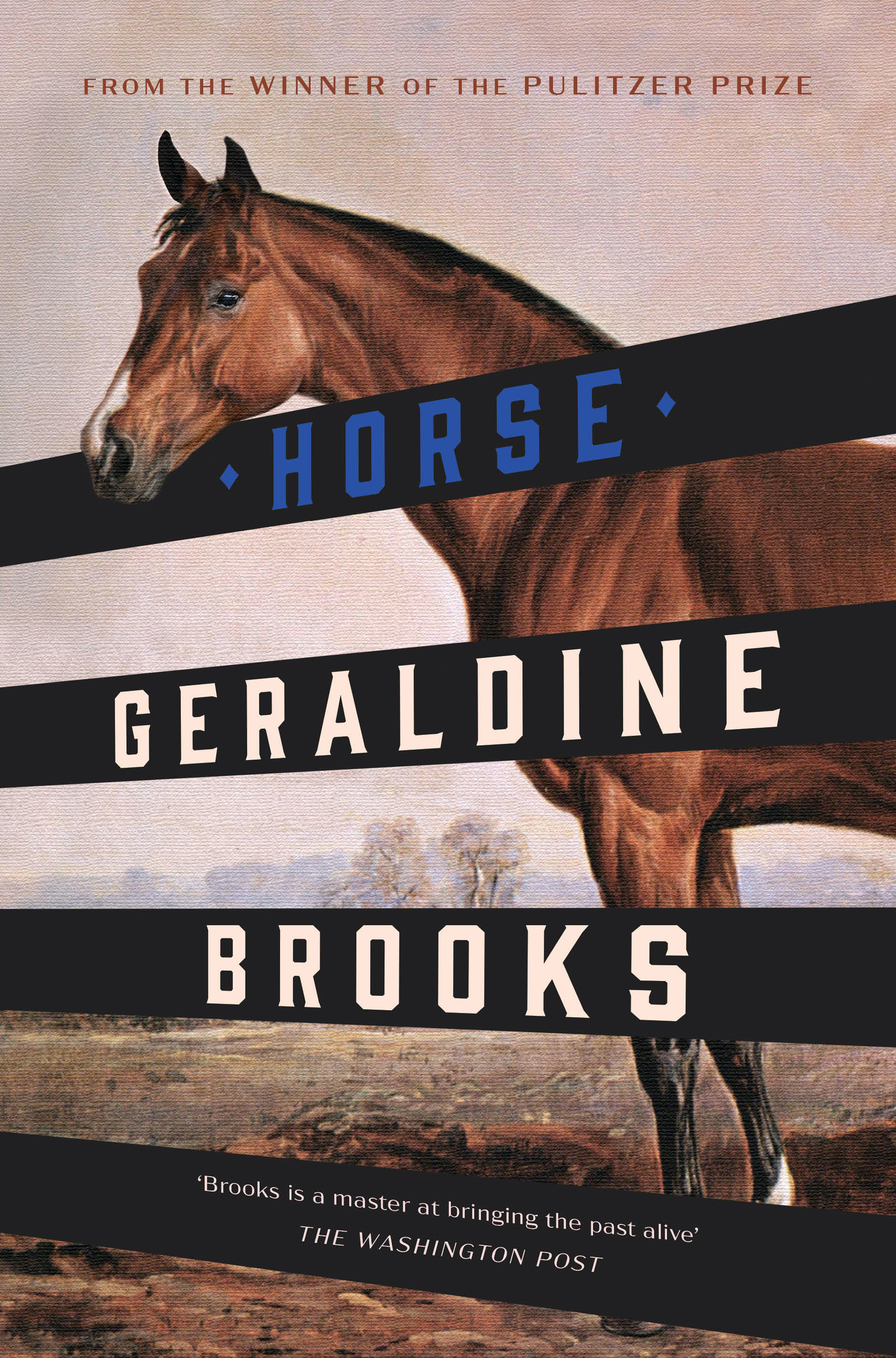 Welcome to ABC Arts’ monthly book column. Each month, we’ll present a shortlist of new releases read and recommended by The Bookshelf’s Kate Evans and The Book Show’s Claire Nichols and Sarah L’Estrange — alongside freelance writers and book reviewers. This month, we’re thrilled to present recommendations from Declan Fry.

All four read voraciously and widely, and the only guidelines we gave them were: make it a new release; make it something you think is great.

The resulting list features page-turning historical fiction from a Pulitzer Prize-winner, an engrossing tale based on a real-life leper colony in early-20th century Sydney, a comic-book memoir-cum-manifesto about body image, subversive poetry from one of our great Indigenous writers, and a multi-generational First Nations family saga from Canada.

A real-life racehorse is the inspiration for Pulitzer Prize-winning author Geraldine Brooks’s latest work of historical fiction, but it’s the people and politics around that horse that will have you galloping through its 400-plus pages.

The main strand of the story is set in antebellum America, where horse racing was ubiquitous — and largely reliant on the skills and knowledge of unpaid Black grooms and trainers.

Brook introduces us to Jarret, a young, enslaved man who spends his life caring for Lexington — the most famous thoroughbred of the era. It’s worth noting here that Lexington was a real horse, who drew fans in their thousands to see him race. But the character of Jarret is a creation – Brooks found only one historical reference to a “Black Jarret” who accompanied the horse across the country, extrapolating that into this character.

The stories of the Black men who cared for these famous horses have largely been lost to history; in a way, this book serves as a correction to the record.

The character of Jarret is a gifted horseman and a loyal companion to his four-legged friend, and his expertise is respected. He’s also mistreated, bought and sold, and quietly suspicious of the rich white men who control his life.

The cruel racism of slave-era America is echoed in a modern-day storyline, where we meet Theo, a Black art historian compelled to learn more about Lexington after discovering a painting of the horse discarded kerbside.

As Theo grapples with microaggressions (a ‘meet-cute’ with a potential white love interest starts with her accusing him of stealing her bike) and far more dangerous interactions with white men in power, the reader must consider how much things have really changed for Black men in America. CN

The Coast by Eleanor Limprecht

The book begins: “Sixteen years captive.” But this is not a prison of criminals, it is a leper colony in a Sydney hospital in 1910. Alice, the central character in Eleanor Limprecht’s moving fourth novel, has lived in a lazaret since she was nine. As horrifying as that sounds, the fear of contagion was so great that isolation was standard practice for people with leprosy in early 20th century Australia. (You can’t read a novel about leprosy without doing further reading, and I learnt a reliable cure was only developed in the 80s.)

The novel is set at the Coast Hospital in Little Bay, where a sex-segregated leper colony was established in 1890. The story is told in alternating chapters from the point of view of different characters; initially we meet young Alice, and as the story unfolds we discover how she ended up at the hospital.

Among the large cast of other characters are Alice’s mother Clea, who also has leprosy; Will, the committed doctor who tends to the patients; and Guy, a young Aboriginal man who served in World War I (where he lost a leg) and who contends with racism as well as the stigma of having leprosy.

Guy and Alice form a beautiful and tender bond, brought together by their shared isolation but also a recognition of each other’s free spirit.

As we navigate a global pandemic that has forced isolation on millions of people, the resonances between the novel and today are stark. And there are other parallels too, such as the racist beliefs about the pandemic’s origins, and the impacts of detention on children.

This is the best of historical fiction: it takes the reader to another time while creating rich, believable characters. This book made me cry; it might make you cry too. SL

Part comic book memoir, part prose poem, part manifesto, big beautiful female theory is about the idea of size in almost every conceivable sense: about letting in and withholding, giving in or concealing, being too much, or being a woman “who could fit through whatever hole you have to crawl out of to get onto The Bachelor”.

Grills, a Melbourne-based artist and writer, is combative in her examination of ideas, such as fatness as costume (celebrities such as Demi Lovato, Eddie Murphy, Courtney Cox are called to account, but Grills also interrogates herself), fatness as choice; fatness as condemnation or moral failing, as inescapability of genes or of personal preference; as an exercise in transformation and redemptive before-and-after narratives.

She explores the idea of the body as an instrument or collection of doll parts (“I could hate my body more be the girl with the most ketosis”); as a site of measurements and evaluations, approbation and (in)validation; as a container for commentary and macro counts.

Grills’s title paraphrases the essayist Leslie Jamison, but her book owes as much to zine culture as it does to creative non-fiction, all while casting a rueful gaze at the first-person industrial complex whose platform it both desires and disdains. (Grills describes negotiating with an editor to sell polemics she doesn’t believe in for a reasonable fee, and writing “a comic about my mental breakdown for a feminist website for fifty dollars or so”.)

Writing in a vein that recalls the confessional assemblages of American author Wayne Koestenbaum, or Hannah Gadsby’s Nanette, Grills inhabits the lives and tragedies of Priscilla Presley, married to Elvis at 14, and Marilyn Monroe, among others; explores the wisdom of Laura Mulvey, Julia Kristeva, Nicki Minaj, Kathy Acker and more.

Self-aware and self-excoriating, whether about “my inability to end a list sincerely when I could just make a joke” or how “I’m dubious about it being revolutionary to have fat and exposed flesh and to forgo a razor”, Grills deserves the last word:

“What I didn’t say to my psychologist, was the reason I’m afraid of my stretchmarks is it tells a story about me that I can’t control. It speaks of permanence, the weight of the decisions and events that can’t be wound back. I’m thinking: how long will I be able to paint self-portraits until no one wants to look at them anymore?”

The Strangers by Katherena Vermette

Katherena Vermette is a poet and novelist of Métis (Michif) heritage (one of the three recognised Indigenous groups in Canada). Her writing is tough, beautiful, confronting and designed to take your breath away, as it tells stories of people who “had sorrow built into their bones, who exchanged despair as ordinarily as recipes … As if sad stories were the only heirloom they had to pass on”.

But Vermette is passing on more than sad stories, and The Strangers is no passive lament for lost histories. Instead, she takes us into the lives of four generations of women from the Stranger family, stretching back to Angélique – known as Annie or as Grandmère – and the big brown house in Winnipeg she moved into in the 50s, through furious Margaret, fractured Elsie, and finally sisters Phoenix and Cedar-Sage.

When the book opens, Phoenix is incarcerated in a cruel juvenile detention system; she is chained while giving birth. This is a character almost bursting out of her skin with anger and despair, roiling with the repercussions of a terrible crime she has committed that we never see face-on. She names her baby boy Sparrow, for a sister who died in foster care.

From Phoenix’s story we move out and into the lives of the other women: her mother Elsie, moving from one drug fix to the other, mourning her lost children and trying to get by; her sister Cedar-Sage, studying hard, always alone; her grandmother Margaret, whose resentment is epic; and great-grandmère Annie, who refers back to the old people and old ways, keeping the family together as much as she can.

The story moves back and forward in time, solidifying the branches of a family tree that has grown from both mythology and a harsh realpolitik, growing stronger all the while. This is a fictional family to believe in. KE

Fogarty is a combative writer. Part of me wants to say something like, “Fogarty’s fights are many” – words that, with their jaunty assonance, feel very Fogartyesque. His poetics extend deep into questions of language and the nature of writing, expanding and challenging the conventions of English.

His scabrous, associative drawl, his syntax – yearning and weary, staunch and disdainful, disbelieving and heart-in-hand – is written in honour (or spite) of the “brief flaring moment”. This is poetry framed not in “one sort of personal fireworks voice” (to use an expression from his poem Intruder Wants the Writer) but with an awareness of how, as he says, “stories are seemly to world words”.

There’s both a kind of warning and a fatigue in the plaintive – and deeply moving – poem A First Note About the Regions:

Sometimes the lines seem driven by the kinetic forces of internal rhyme, as in this jangly couplet from Yo I Am the Man: “What gave the name rights man right to rewrite history / by giving change to the land names?”

Such moments recall the work of Murri songwriter Kev Carmody, whose Needles in the Nursery shares the frenetic energy of Fogarty’s poetry. (Carmody’s 1995 song The Young Dancer is Dead was written in memory of Fogarty’s brother.)

“A poet moves people, changes society, not white man laws,” Fogarty writes in his poem The Poor are Well Organised Than the Up-Class. “Till those who can not write will write their own way.”