The Best Books About Women in Music – Publishers Weekly 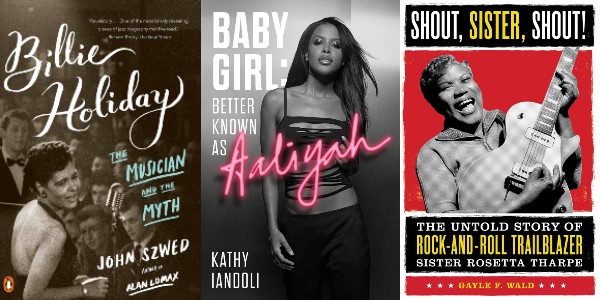 Music critic Danyel Smith’s whipsmart latest, Shine Bright: A Very Personal History of Black Women in Pop, is a masterful examination of the Black women artists who’ve indelibly shaped American popular music. Paying tribute to the music that “fortified” her through her toughest times growing up in L.A. in the 1970s all the way to her career as a music journalist, Smith offers a sharply written survey of the Dixie Cups, the Sweet Inspirations, and other women who blazed the trail. Legends such as Aretha Franklin, Whitney Houston, and Janet Jackson make appearances, too, as stirring figures who represent the challenges Black women continue to face in the music industry and the ways in which they reclaim their struggles to fuel their art.

Stacks on stacks on stacks. That’s how music books exist in my home. The books are my friends. Some of them are even written by my friends. I am a longtime music writer and editor and the host/creator of the Spotify Original podcast Black Girl Songbook—a show that centers stories of Black women who make music of all kinds. So, yes: my typically neat and citrus-scented space houses stacks on teetering and seemingly unorganized stacks of tomes about musical lives—the sound and the fury.

A glance at a dining room shelf reveals Ella Fitzgerald: A Biography of the First Lady of Jazz by Stewart Nicholson and Her Name Is Barbra: An Intimate Portrait of the Real Barbra Streisand by Randall Riese—both from 1993. I also see Rock She Wrote: Women Write About Rock, Pop, and Rap (1995), edited by Evelyn McDonnell and Ann Powers. I have an essay in in there myself, about the beloved rap duo Gang Starr. My friend Benjamin Meadows-Ingram’s 2015 Diary of a Madman: The Geto Boys, Life, Death, and the Roots of Southern Rap is next to The Supremes: A Saga of Motown Dreams, Success, and Betrayal from Mark Ribowsky, which is next to the prescient Flyboy in the Buttermilk: Essays on Contemporary America (1992) from genius music and cultural critic Greg Tate. I also see ego trip’s Book of Rap Lists (1992), co-written by a genius collective that includes my husband Elliott Wilson. That’s one stack. All are worth your time. It’s the books about women, though, that glow. Each spine is a wee marquee, tempting me to experience the stories and the soundtracks, again and again. Let’s glance at a few more stacks.

What’s New-ish
Why Solange Matters (2021) from punk rocker Stephanie Phillips is as much a shimmering slice of biography as a dare to bravery. Liner Notes for the Revolution: The Intellectual Life of Black Feminist Sound (2021) is from Yale University’s Daphne Brooks. I can hear her voice in my ear when she writes about “the long-running tendency of pop music writers to think in hagiographic terms about the… ‘queens’ (so many queens!)… who have dazzled and destroyed audiences from one generation to the next.” Dawnie Walton’s 2021 The Final Revival of Opal & Nev is fiction yet history yet journalism—check it out for yourself. Clover Hope, author of The Motherlode: 100+ Women Who Made Hip-Hop (2021) writes like the gloriously nerdy former XXL, VIBE, and Billboard editor she is, and the Rachelle Baker illustrations stare out, cooler than any of us will ever be.

To-Be-Read
Kathy Iandoli’s Babygirl: Better Known as Aaliyah (2021) has me terrified—of my own grief. I’m going to read it when I am feeling really, really strong. I cannot wait to leap into Celia: My Life by the late Celia Cruz (2004), Shout, Sister, Shout!: The Untold Story of Rock-And-Roll Trailblazer Sister Rosetta Tharpe from Gayle F. Wald (2007), and Reckless: My Life as a Pretender from Chrissy Hynde (2015) because I must know even more about my fave: 1979’s “Brass In Pocket.” Queen: The Life and Music of Dinah Washington from Nadine Cohodas beckons, as does Miss Rhythm: The Autobiography of Ruth Brown, Rhythm and Blues Legend (with Andrew Yule, 1996).

Always in View
Josephine by Josephine Baker with Jo Bouillon (1977) is necessary, as is 2004’s Soul on Soul: The Life and Music of Mary Lou Williams from Tammy L. Kernodle. And while the fact that Patti LaBelle’s illuminative Don’t Block the Blessings: Revelations of a Lifetime (1996) ends with a Sojourner Truth quote is wildly genius, it’s I, Tina: My Life Story by Tina Turner with Kurt Loder (1986) that has settled deeply in my spirit. The performances of Angela Bassett and Laurence Fishburne as Tina and Ike Turner in the film version—1993’s What’s Love Got to Do With It—are so iconic, and the former Anna Mae Bullock is such a revered figure, I, Tina functions now as a kind of yellowing manuscript from an alternate universe. I feel Loder’s deadpan, trustworthy energy from every page. I can almost hear Turner’s blood rushing. I feel her tears and ambition. Karrine Steffans’s Confessions of a Video Vixen is deeply braided through with trauma, but in 2006, when rap was having one of its best years ever, Steffans shook the world with the hardcore intimacy of her life stories. There’s also the bodaciously designed The Rihanna Book, published by Phaidon Press in 2019, and 2006’s Dirty Blonde: The Diaries of Courtney Love.

My Slight Billie Holiday Obsession
I start here with Lady Sings the Blues by Holiday with William Duffy (1956) even though in real life I started as a child with the 1972 film Lady Sings the Blues starring Diana Ross in the Oscar-nominated title role. I was too young to witness all the heroin addiction, but the movie is a big part of the reason I love music and film—and Billy Dee Williams. In the book, though, it’s Holiday’s writing/speaking voice that seduces: the melancholy, the fearlessness, and the insecurity. A counterpart is John Szwed’s Billie Holiday: The Musician and the Myth (2015). He writes about Holiday’s relationship with the media and examines the book Lady Sings the Blues. There’s so much, but right now, aside from her music, I’m into 1998’s Blues Legacies and Black Feminisms: Gertrude “Ma” Rainey, Bessie Smith, and Billie Holiday by Angela Davis (1999) and Billie Holiday: Wishing on the Moon by Donald Clarke (1994).

My tacks are ever changing. I trim back, I add. I lend (rarely!). I use my stacks for enjoyment, for inspiration, and for research. I read books by and about women making music—especially Black women—not only because they are under-celebrated and under-interrogated, but because they are the most interesting and influential, period. We have to know more, and anticipate more, because we have to do more—only to receive less credit and compensation. We are voice, tale, and prose. We sing truth to power.

And I haven’t even mentioned my stacks of Da Capo Press’s Best Music Writing collections or Alice Bag’s 2011 Violence Girl: East L.A. Rage to Hollywood Stage, a Chicana Punk Story, or 2020’s She Come by It Natural: Dolly Parton and the Women Who Lived Her Songs from Sarah Smarsh, or More Myself: A Journey by Alicia Keys, with Michelle Burford (2020), or the towering 1992 I Put A Spell On You: The Autobiography of Nina Simone, with Stephen Cleary. My stacks are leaning! They are not dusty, though, they’re gleaming. And to quote the late great Luther Vandross—there’s never too much.