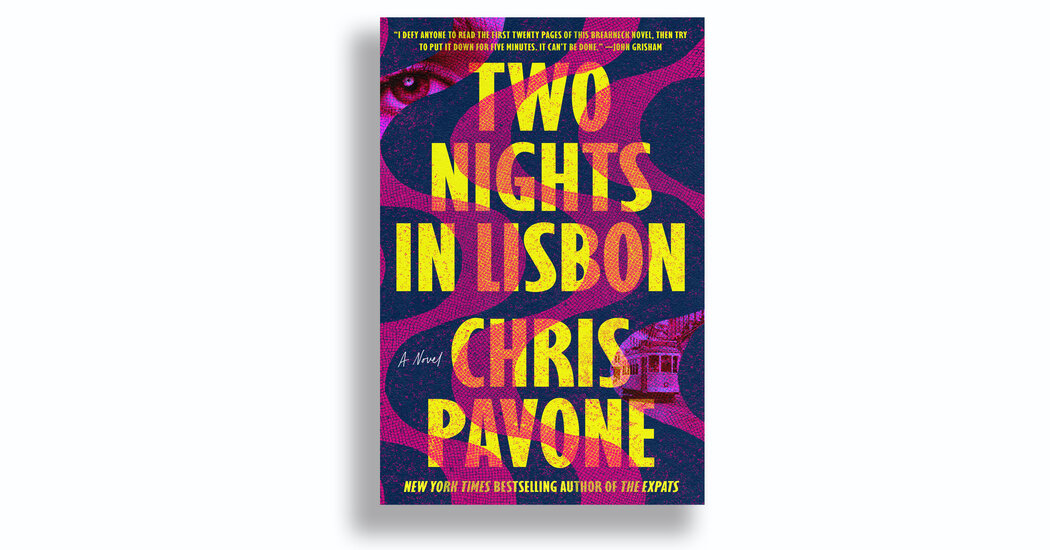 The heroine of Chris Pavone’s new thriller, “Two Nights in Lisbon,” learns that double lives can have hidden costs.

It’s been 10 years since Chris Pavone made his showstopping thriller debut with “The Expats,” a book so twisty and offbeat that it established his spy stories as unmissable. His tricks were exotic then, but through four subsequent books they’ve become familiar. He likes strong, sneaky heroines. Fake identities. Married characters who keep secrets from their spouses. Intricate espionage. Touristy settings. Enough far-fetched subplots to make heads spin.

With each new effort, Pavone’s novelty value has diminished. And he mentions in his acknowledgments that his latest, “Two Nights in Lisbon,” has been through many drafts. If the headlong narrative brio that propelled “The Expats” though Luxembourg has waned, perhaps that’s because Pavone’s latest protagonist, Ariel Pryce, is so fretful and talky. She’s not much like the first book’s Kate Moore, who played decorative wife when she had to but could also crawl onto a window ledge and into a stranger’s locked bedroom when necessary.

Pavone still has game. He’ll dupe any reader who takes the plot of “Two Nights in Lisbon” at face value. This story nominally starts once Ariel awakens after a night of wild passion to find that her husband, a dashing businessman named John Wright, has disappeared. He left their Lisbon hotel while she was sleeping. She has no idea why.

John is much younger than Ariel. They haven’t been married long. And he seemed perfect to Ariel, who may herself be a cipher. She has lived at least two different lives under two different names and kept them separate, or so the book tells us. “When someone seems too good to be true,” Pavone writes, “he’s not.”

Thus begin Ariel’s efforts to figure out who she married. And why he has apparently been kidnapped. She is not eager to deal with the local police, let alone the higher international authorities that eventually take an interest in John’s vanishing. But she’s stranded in Portugal, John’s personal history seems confounding and she needs to figure out what happened to him. So several layers of law enforcement are introduced into the story.

In a maneuver that tangles his book significantly, Pavone gives it a time span much longer than the “two nights” of the title. It flashes back frequently to Ariel’s past lives and earlier incarnations. Most recently she ran a bookstore in a small town and lived on a farm with her son and a lot of animals; this is the kind of book in which even a pet goat named Fletcher may have a secret. In any case, the flashbacks persuade us that Ariel is at least as mysterious as John.

Pavone risks whipsawing the reader as he springs surprise after surprise about how these two got to Portugal and what they were really up to. And he trots out a villainous character from an earlier book to cast a shadow over this one, which feels like recycling. Anyway, a lot of energy goes into the idea that John was kidnapped and Ariel must raise a ransom. The search for help leads her to a shadowy figure she knows and abhors.

“Two Nights in Lisbon” strays so far from its original setup that it feels like more than one book. Most of what we know about Ariel casts her as a relatively conventional figure, but Pavone ratchets up his story to create impossibly high stakes. There is contemporary political resonance in the real story he’s telling. There’s a strong emphasis on abused women and the world’s refusal to take them seriously. Ariel has experienced victimhood throughout her multiple lives, and the author has trouble balancing her obvious strength with her history of having been exploited. You could argue that this matters to the book’s denouement or just deem it hard to buy.

Pavone strongly argues against the strictures that can shield powerful predators from repercussions. And he makes an important plot point out of Ariel’s enforced secrecy. He is setting up a whopper of an ending, one that may be too much for even his most devoted readers, who have had to grapple with the implausible before. He built “The Accident,” which overlaps with this book, around the idea of a tell-all manuscript so dangerous that it imperils whoever has it. While reading that book you had to believe such a manuscript could be real. What he asks us to accept this time is even more extreme.

Although Pavone fans may find “Two Nights in Lisbon” quite a stretch, this smart, calculating author remains many notches above others in his field. He is worldly and inviting when it comes to the book’s mostly European settings. His book captures a vacation’s escapism even as its heroine feels walls closing in. And his smaller scenes, like those set in Ariel’s bookstore, feel much less forced than his high-stakes ones. It’s a nice touch to say that the bookstore, with its coffee and greeting cards, does “a brisk business in banal.” Ariel can be accused of many things, but banality isn’t one.