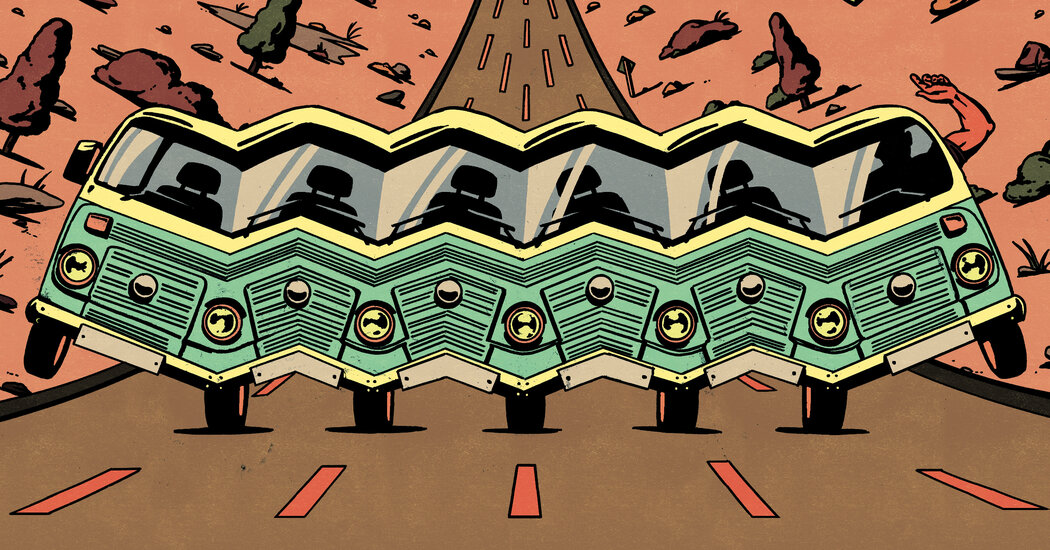 Just how lawless and unhinged can the world rendered in “Sleepwalk” get?

“Sleepwalk,” Dan Chaon’s fourth novel, begins with the mercenary Will Bear, a mild-mannered Mad Max in a tricked-out camper van, delivering a debtor named Liandro into the hands of his creditor. The particulars of Liandro’s debt are as vague as the future awaiting him, though to tell by the ankle shackles and the many tears shed, Liandro isn’t optimistic. Will does his best to keep things light, supplying Liandro with hits from a blunt and offering to play board games with him in their downtime as the two head east through the Bonneville Salt Flats. But Liandro is in no mood, and his weeping turns intense.

Will won’t have any real misgivings about his line of work until his next assignment, when the trade-off involves far more innocent fare: a 3-week-old baby. The end-user is too terrifying to contemplate and quickly provokes in Will a soothing stream of delusions. Here he is justifying his role in human trafficking:

“I like the idea that I’ll pass the little guy off to someone who will sell him to some nice wealthy couple who will raise him as their own son. I picture a movie star and her kindly, infertile husband, or some gay guys in short-sleeved shirts, hoping to make themselves a family in Minneapolis, and I picture them walking along through that rose garden in Lyndale Park with a toddler between them, and they pass that big pretty fountain with the cherubs on it and they let him dangle his feet in the water.”

Hmm, I doubt it. But I did love it. Chaon creates a daring irony in the disconnect between the road warrior’s self-deceit and the reader’s skepticism. The mystery, the moral audacity, the sense that anything is possible in these early pages refreshes not only the hit-man trope but also the world itself. Chaon taps into the prurient thrill of riding shotgun with the unpredictable, and the question dawns: Just how lawless and unhinged will the world of “Sleepwalk” get?

Like Liandro, Will Bear (one of several aliases under the rubric he calls the “Barely Blur”) is working off some kind of debt, incurred by the deplorable mother he eventually murders, as a general-purpose contract killer and cleanup man. This inheritance, like most inheritances in Chaon’s work, hangs over Will with the weight of a biblical curse and stunts all hope of personal growth. But as indebted matricides go, he’s polite, intermittently wise and eminently huggable. He successfully shrugs off his bad memories with copious amounts of marijuana and the occasional morning beer. If those aren’t your coping mechanisms, well, it’s likely your mother didn’t incubate you by turkey baster in order to turn a quick profit and then demand, “Don’t ever call me Mom.”

The conditions of the killer’s life are happily sketched: He has no fixed address or Social Security number; he roves the back roads in a motor home dubbed the Guiding Star; he has a canine sidekick, a pit-bull mix named Flip every bit the killer he is; he works as part of a network of so-called Friends (Friend Monte, Friend Riordan) for a criminal syndicate known by the anodyne name Value Standard Enterprises; he hates nothing more than a stroll down memory lane, where his trauma lives; and, in his professional isolation and private agony, he is profoundly vulnerable to sentimental appeals.

It is on account of one such appeal that the early tension of the book gives way to its major preoccupation: the possibility that long-ago donations Will made to a sperm bank have resulted in a passel of genetic descendants, one of whom, Cammie, abruptly shatters his illusion of anonymity by ringing one of his many burner phones to announce that she is probably his daughter. Now it’s Will’s turn to be skeptical: Is she a spy bot? A counteroperative from Hezbollah, or Los Antrax, perhaps? A government agent looking to bring all of Value Standard Enterprises down? For Will, it’s just another day at the office, dear — until Cammie gets under his skin.

Things turn weirder. Cammie suggests that Will’s 167 offspring — 167! — are the result of an elaborate sperm-based Ponzi scheme cooked up by a tech guru and an old friend of Will’s named Patches, who used to pay him to suck his big toe. Chaon shifts his focus from a world — the shadowy, obscurely conducted underworld of the criminal — to the world, an amped-up alternative to our current one: dystopic, conspiratorial and all but falling apart. The lens widens to take in protests, private militias, humanoid apes with anger-management issues, scavengers of airplane wreckage and menacing drones outfitted to look like friendly penguins. The plot turns Pynchonian, then flies past that predecessor into the truly baroque.

Through it all, the two sides of Will Bear do internal battle: The killer’s amoral worldview vies with traditional values and the most old-fashioned sentiments. His desire to play house borders on the pathological. Before long, he buys Cammie’s story wholesale, despite a stunning lack of evidence and its real risks, because he sees a way out of valuelessness, increasingly calling her “my daughter,” buying her gifts and indulging in elaborate fantasies of their communion.

If it is a bit of a drag, dramatically, that she never physically appears — a formal necessity to keep the mystery of her true identity viable — Chaon does manage, by way of Will’s self-deluded longing, to turn his antihero into a figure worthy of pity. Will wants nothing more than the establishment, or the restoration, or the simulation, or even just the idle fantasy, of a wholesome domestic scene: he and his daughter on a desert island digging each other’s identical intonations and facial tics. Too much to ask? He is a human-trafficking contract killer, after all. Chaon never tries too hard to reconcile that moral dissonance, but as the book barrels toward the final blowout, the matricide fully grades into the corny dad, albeit one who microdoses LSD and never travels without his rocket launcher.

What prevails above the plot is the voice, which is consistently winning and — odd for so bloody a tale — unfailingly warm. It’s a comic departure from the straightforward darkness of recent Chaon, and a welcome change. That’s no knock on his earlier books, just an acknowledgment that humane black comedy is a good look on him. He does madcap well and likes his characters, even the killers — especially the killers. Sure, there’s a crap world out there, and if Chaon’s fever dream is actually a forecast, it’s going to get a whole lot crappier. In that case, we’d all do well to affect a bit of Will Bear’s hopeful good cheer.

Joshua Ferris is the author, most recently, of “A Calling for Charlie Barnes.”