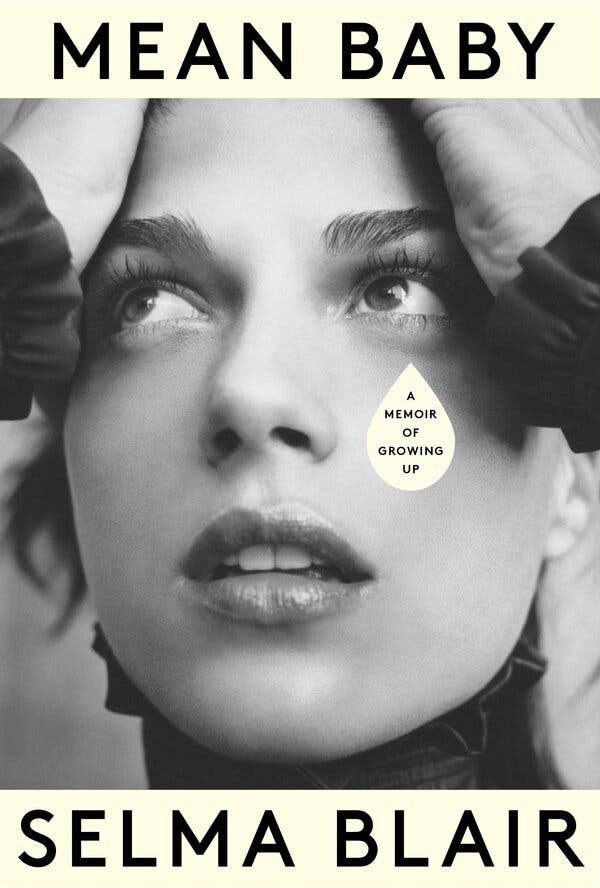 MEAN BABY: A Memoir of Growing Up, by Selma Blair

Growing up, Selma Blair had the mystical experience common to adolescent girls who want to be writers: an encounter with Joan Didion. “It was as if she were speaking straight to me,” Blair writes of discovering Didion’s work in high school.

Blair became an actor, but her memoir, “Mean Baby,” opens with sentences that echo the rhythms and concerns of her early idol: “In the fall of 2002, I saw a tarot reader in Los Angeles. I had just been cast in a movie that was about to film in Prague for six months. I was 30 years old, anxious and searching.” You have the flat declaration about Los Angeles, you have the movie business, you have neurasthenia, elegantly expressed.

Blair has multiple sclerosis, a condition Didion shared. When Blair received her diagnosis a few years ago, in her mid-40s, suddenly a lot of things in her life — the feeling that her arms were on fire; her habit of self-medicating with alcohol; her erratic behavior — made sense. “Mean Baby” is not an illness memoir. It is a traditional autobiography, in that it covers the whole of Blair’s life so far. But M.S. haunts the book — it’s what we know is in those cards. Blair’s disease offers her a new way to see her past, and she uses it to divine her own history.

Blair made her name in the 1999 teen movie “Cruel Intentions,” in which she played the weird innocent Cecile, who is underestimated and wrongly labeled by the other characters. Blair herself has been burdened by labels since her birth, in 1972 near Detroit. For weeks she had no name other than Mean Baby. (“I came into this world with my mouth pulled into a perpetual snarl,” she writes. “I was born with a glower, my face defined by a heavy brow that adults coveted.”) Finally, her mother started calling her Blair, after a Michigan politician. Later, her mother added Selma to the mix, in memory of a friend who had died. Throughout Blair’s childhood, the dissonant names were used interchangeably. In elementary school, Selma Blair Beitner was often Selma at school and Blair at home. By the time she reached adolescence, she writes, “Selma identifies as Anne Frank, while Blair is off trying to cultivate a Hitchcock blonde look, at least in photographs.”

Blair describes her childhood in a series of evocative anecdotes. While they sometimes seem like notes one might use to tell a story rather than an actual story, together they accumulate power, especially those about her mother, her “first great love.” Beautiful, critical and lacking in judgment, her mother liked to tell Blair the story of how she wasn’t sure she wanted her. When, in seventh grade, Blair tells her mother she’s gotten her period, her mother asks her weight, and then informs her that she must never gain another pound. “This is your weight,” her mother pronounces. “This is your size.” Blair writes, “I have been wary of weight gain ever since.”

In ninth grade, Blair begins attending Cranbrook Kingswood, a private school in Bloomfield Hills, Mich. — “the most glorious set I’ve ever been on,” populated by “lacrosse players and VW Cabriolets.” There, she is encouraged to make art and to write, and her experience of the place is so formative that, decades later, she buys a Cape Cod-style home in Los Angeles and decorates it in a way she describes as “tailored ambience — walls painted in shades of hunter green and Polo blue” that are “intentionally reminiscent of a prep school. I wanted it to feel like Cranbrook, the place that changed me.”

Yet the school is also the place where she is “ruined,” groomed by a dean who abused her. In the years ahead, Blair writes, she would be raped “multiple times”; she says that alcohol has made her unable to remember the details of many assaults: “I left my body and other people entered it.” Long before her body was attacked by M.S., it was attacked by boys and men. Blair is now sober and understands herself to have used alcohol to treat the emerging pain of her illness; one imagines that she was also treating the enduring pain of these assaults.

In high school, Blair starts acting at the urging of a beloved English teacher who says it will help her writing. When he sees her onstage, he exclaims, “Blair, you’re an actress!” She’s devastated: She wants him to see her as a writer and doesn’t understand that she can be both. As soon as she finishes college, at the University of Michigan, she moves to New York and tries to make it as an actor, supporting herself with a job at the Gap. One evening, an agent sees Blair perform a monologue from “Top Girls.” The agent signs Blair and sends her on auditions, and, in short order, she is discovered and off for Los Angeles.

Once Blair makes the cross-country move, her book loses some of the spell cast by the early section. At one point, she uses the phrase “all the charming people I had shared something with during my Hollywood life” — that’s the vibe of these pages. Blair sometimes acted out when she drank in public. She went through a stage where she bit people in greeting or affection; Kate Moss bit back.

This was behavior she now sees through the lens of her illness; it was also an expression of her awkwardness. People don’t always get Blair, who yearns to be seen. As she settles into her career, filmmakers cast her time and again as another version of the mean baby. But the fashion photographers who shoot her see beyond the label. (Blair cares about clothes and is prone to delightful designer analogies: A black eye patch she wears as a child has a point in the center, “a bit Gaultier, like Madonna’s cone bra”; a huge moth that shows up years later by her pool has the swirls of “a Proenza Schouler print.”)

As Blair enters her 40s, the symptoms that have plagued her for years — nerve pain, numbness, depression — worsen. “I am in pretty intense pain,” she posts on Instagram, and her friend Elizabeth Berkley sees the posts and suggests Blair see her brother, a spinal neurologist. He sends her for an M.R.I. And then, finally, somebody really sees Blair — inside her skull. The imaging shows M.S.-related lesions on her brain. The scan is her “new fortuneteller,” the diagnosis her new label, “this time one that fit.”

The rest of the book chronicles Blair’s life with M.S., including her commitment to speaking openly about her experience of the illness, which has included a punishing stem-cell transplant. Early in the memoir, Blair quotes Didion’s famous dictum “We tell ourselves stories in order to live.” These days, we tell ourselves stories on multiple platforms in order to live. Blair also told hers in a recent documentary, “Introducing, Selma Blair,” an intimate film that does some work the book doesn’t. From the memoir alone, I didn’t get a visceral feel for Blair’s symptoms — like what a feat it has sometimes been for her to even climb the stairs.

When Didion wrote about why we tell stories, she was reflecting on our need to bring meaning to our experience — to impose “a narrative line upon disparate images.” M.S. is the line Blair imposes in “Mean Baby.” The illness that attacks her spine is the spine of her story, offering perspective alongside structure. “I have no ability to organize. I can only choose one memory at a time,” Blair writes of the way her mind works these days. Where the book reflects this is also where it has the most power, in the memories Blair handles one by one.

“People with M.S. spend a lot of time in their homes,” Blair observes. And at the end of this generous, moving book, that’s where she returns. Here, she roams intuitively, assuredly, between present and past. A reflection on bathing, on submerging herself and feeling “cool and young,” reminds Blair of how her mother loved baths and would instruct the housekeeper to always leave a “trail of Ajax at the bottom” of the tub. But Blair’s mother was also afraid she would die in the bath, especially during thunderstorms. She’d ask Blair to wait outside the bathroom, where Blair would stay, “ear pressed to the door,” vigilant. She writes, “That is my life: anticipating the lightning.”

In the film, Blair points from her brain to her mouth and says that she’s “losing access to my speech from my brain to get it to you.” Though Blair was describing a symptom of M.S., a disease that I do not have, the sensation was familiar to me in a symbolic way; I’ve often felt as if I have a faulty connection between brain and speech, and this is part of the reason that I write. For years Blair looked to astrologers, mediums and healers to tell her story. She was “looking for the right person to relay the drama of my life.” She herself is the right person. When she made that gesture from her brain to her mouth, I thought, That is also a symptom of a writer.

Susan Burton is an editor at This American Life and the author of “Empty.”