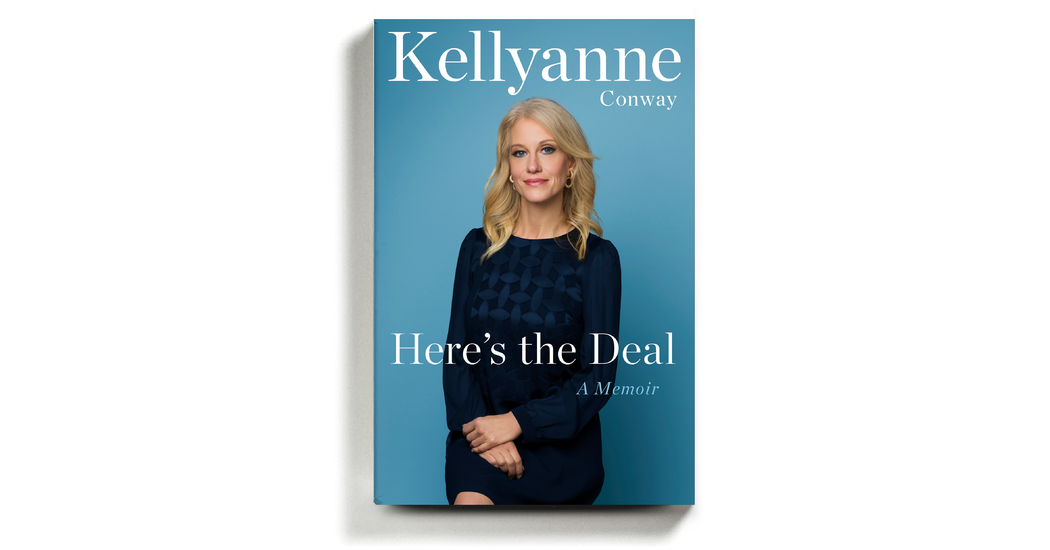 In her memoir, “Here’s the Deal,” she calls her time working for President Trump “the wildest adventure of my life.”

HERE’S THE DEAL: A Memoir, by Kellyanne Conway

Can this marriage be saved? That was the name of a long-running couple’s counseling column in the defunct magazine Ladies’ Home Journal, a onetime client of Kellyanne Conway’s. And it’s a question that hovers over Conway’s new memoir, “Here’s the Deal,” its title seeming to assure the kind of straight dope that her former boss Donald J. Trump’s ghostwritten chest-thumper, “The Art of the Deal” (1987), did not deliver.

There is some of that, but also familiarly dizzying spin.

Encouraged in her telling by Trump himself (“Write a great book, honey”), this is but the latest of the squazillion accounts to splash down from his presidential administration, for which the author was campaign manager, senior counselor and frequent media representative in what she calls, as if it were a rocky theme-park ride, “the wildest adventure of my life.” Conway clutches policy like a flotation device, but keeps drifting back to the home front in this book.

Introduced by Ann Coulter, the conservative fellow “pundette” she met while making the cable TV rounds in the late 1990s, Conway and her husband, George T. Conway III, a lawyer, had a Concorde courtship — it was “intrigue at first sight,” she writes — and eventually an “amazing wedding” (the “Viennese dessert selection” is noted) and an apartment in Trump World Tower. They were blessed by Pope John Paul II on their honeymoon and later with four children, including fraternal twins. More than a decade later, a few months into the highest profile job she’d ever had and without any preparatory pillow talk, he — who had helped to impeach Bill Clinton and had seemed to cheer the Make America Great Again platform — dove onto Twitter and started posting disapprovingly about her boss.

“The duplicity of it stung me,” Conway writes. “Of course it did.”

Before long George was telling her “You work for a madman” in “a loud, sinister voice,” dramatically ramping up his online output in a manner she found obsessive and helping to found the Lincoln Project, a committee to not re-elect the president she was so close to. Bristling at personal questions from curious journalists, which she perceives as sexist, Conway borrows from both Julius Caesar — “Et tu, Wolf?” she writes of the CNN anchor Wolf Blitzer — and, a few channels down on HBO, Carrie Bradshaw: “Is cheating by tweeting actually a thing?”In an afterword, she speculates, “George and I may not survive” as a couple.

But though both women are fast talkers and snappy dressers with intermittently absent fathers, Lord was a blue blood from the Main Line, and Conway — as she’ll proudly remind you — is a Blueberry Pageant Princess raised in Atco, N.J., a tiny town between Philly and Atlantic City. The “Golden Girls” is what she calls the four Italian Catholic women who raised her, and Kellyanne was also a kind of golden girl: popular, athletic and the valedictorian of her high school who was soon volunteering on Capitol Hill. Primed to support Geraldine Ferraro’s vice-presidential candidacy in the 1984 election, she instead fell hard for Ronald Reagan.

Conway — then known as Fitzpatrick — got a law degree; she had enjoyed playing “judge, prosecutor, defense counsel and all the witnesses” in a mock courtroom as her dolls and stuffed animals “sat in stunned silence” — and then became the E.E. Cummings of pollsters: rendering the name of a firm she founded, the Polling Company, in all lowercase on business cards before it was a “hipster cliché.” She was good at analyzing data and hopping on prop planes to see how it was playing in Peoria; and, as amply evidenced here, she also likes wordplay: “Gawk and squawk.” “Armful of harmful.”

“They hadn’t seen my numbers,” she writes. “But I had their number.”

Conway wants to identify and indict her underminers. She catches Steve Bannon, “a serial leaker” whom she portrays as doing little actual work, “standing like a spring break bar bouncer” and nodding his head “so emphatically he looked like a bobblehead doll in a windstorm.” Jared Kushner she characterizes as a hopeless silver spoonster, revisionist historian, “a crown prince who used encrypted apps to literally talk to a crown prince.”

But while rat-a-tat and packed in a manner to be expected from someone once known as “Sally Soundbite,” Conway’s own bid at recording history, written with a book doctor, is spotty and selective. She goes on for pages about opioid addiction and abortion, but other than fleeting mentions of the Second Amendment, completely ignores the issue of gun control, which lands terribly in a month of two massacres. She is furious about incursions of the press, including this newspaper, into her family and private life, but gives them ever more grist by fuming hyper-specifically about her husband’s foibles. Though she scorns “angry feminists” wearing “pink hats and yoga pants,” her own triumphs over doubting Thomases, the overbilling “nonwizards of Ozzes” behind Mitt Romney’s failed 2012 presidential campaign, are satisfying, in the way a Jacqueline Susann heroine is satisfying.

“Ladies, how many times do we feel ‘less-than’?” she writes. “Or apologize even though we did or said nothing wrong? Pass it on: ‘Being you’ is enough!” And once is not enough, as Susann put it — but this is real life.

Pass it on: Though it’s hardly short, this book isn’t remotely the whole story, nor is it likely to be the last volume of the Conway Chronicles.

Alexandra Jacobs is a book critic and the author of “Still Here: The Madcap, Nervy, Singular Life of Elaine Stritch.” @AlexandraJacobs