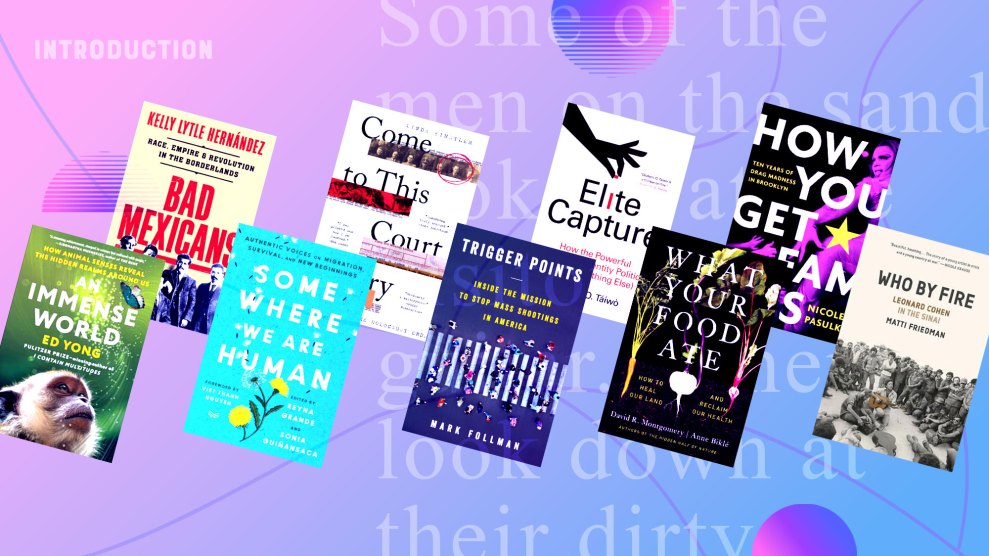 Facts matter: Sign up for the free Mother Jones Daily newsletter. Support our nonprofit reporting. Subscribe to our print magazine.

Beach reads and romance novels may offer escape. But maybe you want to devote your free time this summer to learning something new—soaking up fascinating tidbits on the ways animals communicate, or diving into under-covered turning points in US-Mexico relations, for instance. We’ve got you covered with our handpicked list of brainy and engaging new nonfiction books:

Bad Mexicans: Race, Empire, and Revolution in the Borderlands, by Kelly Lytle Hernández. Before there was Pancho Villa and Emiliano Zapata at Xochimilco, there was a radical newspaper, a pair of exiled brothers, and two governments trying desperately to shut them up. In Bad Mexicans, Lytle Hernández, a UCLA professor and author of an eye-opening history of the Border Patrol, tells the story of the Magonistas—the dissidents who lit the fuse for the 1910 Mexican Revolution from across the border in the United States. Led by Ricardo Flores Magón (and assisted by his brother Enrique), the Magonistas faced kidnapping, deportation, and imprisonment. But they found common cause among Mexicans and Mexican Americans in cities like San Antonio and Los Angeles, and drew support from leading figures of the American Left (including this magazine’s namesake). Lytle Hernández paints a rich portrait of American communities as a crucible for revolutionary ideas—all while packing her pages with enough spies, trials, chases, and raids to fill a miniseries. I’ve been waiting for a book like this: a riveting popular history of a revolutionary moment that—because it involved Mexicans, because it involved anarchists, and because it involved both of those things at once—has never claimed the place it deserves in the American historical canon. —Tim Murphy

Come to This Court & Cry: How the Holocaust Ends, by Linda Kinstler. Only a few pages in, the origin of this book’s title becomes clear: It is drawn from the British prosecutor Sir Hartley Shawcross’ closing arguments at Nuremberg in 1946. “Mankind itself,” he said, “comes to this Court and cries: ‘These are our laws—let them prevail!’” When I read this, I scribbled a note in the margin: “Title, with a twist.” Come to This Court & Cry is a cross-continental search for the lost stories of two of the Holocaust’s villains in wartime Latvia, one whose body was stuffed in a trunk in Uruguay in 1965 and another, the author’s grandfather, who disappeared mysteriously in 1949. Along the way, it is a sobering reminder that despite the horrific crimes of the Holocaust, justice was illusive. And that as time goes by, villains can be resurrected. It’s not hard to turn the lessons of this book onto other countries and other eras, including the United States, as it grapples with its government’s actions even as recently as January 6, 2021. This important book is part mystery, part history, and part parable for our time. And the title is, as Kinstler later explains, less a cry for justice than a mourning for what cannot be fixed. —Pema Levy

Elite Capture: How the Powerful Took Over Identity Politics (And Everything Else), by Olúfẹ́mi O. Táíwò. In a matter of years, Black Lives Matter went from being considered a fringe rallying cry to a hashtag and slogan that significant corporations weren’t afraid to associate with. Despite this, nothing for Black people, or any other nonwhite races, has gotten materially better. In Elite Capture, Georgetown assistant philosophy professor Táíwò deftly guides us through how, by isolating identity from class, the masters of society can pay lip service to racial and social injustice without ever doing anything that would actually resolve it. In what is maybe the clearest articulation of this “elite capture” phenomenon that I’ve read, Táíwò provides the start of a roadmap that can hopefully lead us beyond it. —Ali Breland

How You Get Famous, by Nicole Pasulka. Before RuPaul’s Drag Race launched the quirky art form into the mainstream, queer queens and kings in Brooklyn were putting their own spin on the pastime, experimenting with performances that were often rawer and riskier than those of their pageant-perfect forerunners. Pasulka, a former Mother Jones fellow and an astute and compassionate observer of subcultures, traces the paths of several mainstays of the Brooklyn scene, from dread-locked nerd Thorgy Thor to hot mess Aja to Merrie Cherry, a socialite and the self-proclaimed “Mother of Brooklyn.” Pasulka’s account, dripping in plush detail and drama and just enough historical asides, relishes in “the sight of a performer who has embraced all the extremes and excesses of gender in order to transcend it, and who has done so in a cloud of sweat, spit, and makeup, while the music throbs and the crowd screams at the top of their gay lungs.” It’s “a reminder that we can be anything—at least for a few minutes—and we can be celebrated for it.” —Maddie Oatman

An Immense World, by Ed Yong. When the Atlantic’s Yong announced in late 2020 that he was taking a break from covering Covid to finish writing a book, the soon-to-be Pulitzer winner was candid about the toll his job had taken: “It’s been months of continually staring straight into the sun,” he tweeted, “and I need to blink.” The result of that blink is An Immense World, a book that Yong told me felt like “a salve for the soul” to write. It takes you into the fascinating realm of animal senses, from how dogs can detect scent histories of their neighborhoods, to the way sea turtles navigate by Earth’s magnetic field, and elephants chit-chat in infrasound. It’s a trip. I’ll warn you that, at times, the book wanders into the weeds (there is, for instance, a very detailed explanation of mantis shrimp vision). But if, like Yong, your soul needs a break—and some damn joy—An Immense World is a trip worth taking. —Jackie Flynn Mogensen

Somewhere We Are Human: Authentic Voices on Migration, Survival, and New Beginnings, edited by Reyna Grande and Sonia Guiñansaca. At a time when immigrants are being dehumanized and vilified, this collection of essays, poems, and visual art by undocumented and former undocumented people reads like a collective manifesto to reclaim the narrative. The intimately told and carefully curated stories make for a tapestry of diverse experiences and perspectives that mirror the vast and complex realities of migration, which often get lost or erased from the conversation. Artists, writers, and advocates from all over the globe share their struggles with assimilation and belonging in a country that forces people to become invisible to feel safe. “For years my mother would take the clothes American women she cleaned for gave her, hand-me downs, their garbage fill a wardrobe. For years she would style women looking to cross the border through the bridge, she would dress them in white women’s excess, style them, teach them how to say ‘American’ to cross the bridge safely. American is a costume,” Jesús I. Valles, a Texas-based queer Mexican immigrant, writes in a poem titled “you find home / then you run.” Their experiences with motherhood, queerness, self-image, and beyond transcend boundaries of immigration status and physical borders. Even if you think you’ve heard these stories before, you haven’t really until you’ve read them as told in their own words and in their own terms. —Isabela Dias

Trigger Points, by Mark Follman. Mass shootings might not be the ideal beach-book subject, but Trigger Points, from Mother Jones’ national affairs editor, is as compellingly readable as it is timely. In the wake of Uvalde and Buffalo and Las Vegas (and, and…), Republican politicians offer only “thoughts and prayers.” Not so Follman’s characters, who are educators, psychologists, FBI agents, and even survivors who work across disciplines to identify and divert would-be shooters—not before they “snap” (a common myth) but before they act. When these unsung heroes succeed, life goes on and they remain under the radar—until now. Trigger Points humanizes their efforts with unparalleled access, showing a path to violence prevention that even the most avid gun nut could embrace. —Michael Mechanic

What Your Food Ate: How to Heal Our Land and Reclaim Our Health, by David Montgomery and Anne Biklé. In their latest plunge into the earthy world beneath our feet, the husband-wife team of Montgomery (a geographer) and Biklé (a biologist) train their expert science-writing chops on a claim made by pioneers of organic agriculture 80 years ago and generally dismissed by conventional agronomy ever since: that human health depends directly on the health of the soil that feeds us. “Soil-dwelling bacteria are the worker bees of the subterranean world,” they write. “They produce the enzymes and organic acids that release the minerals held in rocks and organic matter for plants to take up.” Decades of assault by toxic chemicals and heavy farm machinery have robbed farmland soil of organic matter and impoverished its microbiome, they show, drawing from rich veins of emerging peer-reviewed research. The result: a steady decline in key minerals and inflammation-fighting phytochemicals in our food supply since the post–World War II launch of industrial farming—and a rising tide of diet-related diseases. Montgomery and Biklé don’t have much to say about the political economy that makes industrial agriculture such a durable force, but they will have you itching to start a vegetable garden, fed by the produce of a nearby compost pile, as an alternative to it. —Tom Philpott

Who by Fire: Leonard Cohen in the Sinai, by Matti Friedman. It was a story from the 1973 Yom Kippur War that was hiding in plain sight: A famous, depressed, angry composer and singer leaves his wife and infant son on a luxurious spot on a Greek Island, and goes to that sudden war a mere 800 miles away. Unsure of what will happen, he feels driven to be there, as a Jew and as a 39-year-old man at the height of his powers, but desperate to shatter his comfortable life and what he felt were his rotting sensibilities. Leonard Cohen arrived in Israel without his guitar, and somehow, faced with the existential moment not just of seeing young men who may die, but also seeing a young country on the brink, was renewed. “I learned these wonderful kids don’t need glorious battle-anthems. Now, between battles, they’re open to my songs maybe more than ever before,” Cohen told a reporter. “I came to raise their spirits, and they raised mine.” With remarkable insight, discipline, heart, scope, stunning reporting, and sometimes quite beautiful writing, Friedman, a Canadian journalist based in Jerusalem, has recreated those days of war and music, regeneration and humility, that freed Cohen to create some of his greatest works of art. —Marianne Szegedy-Maszak