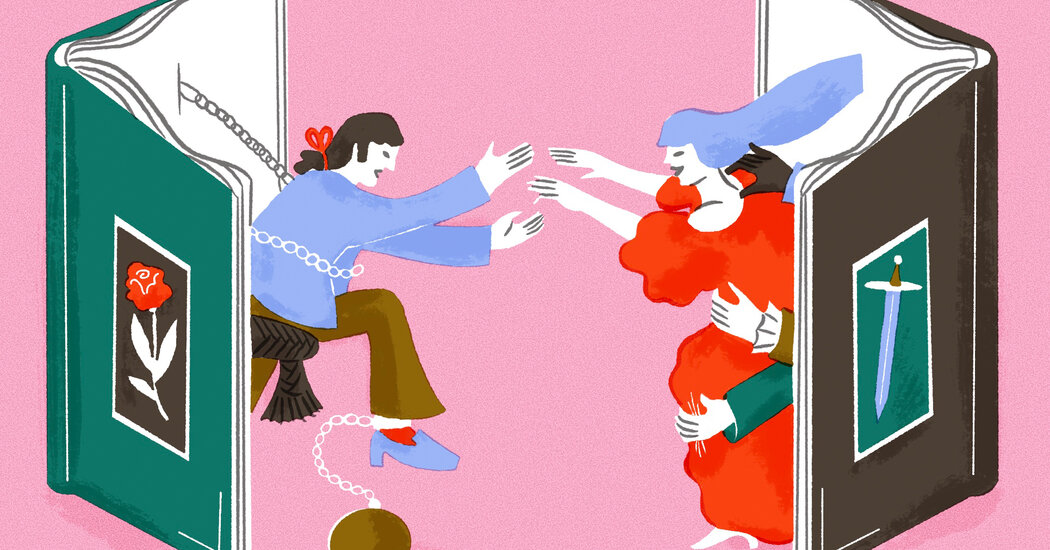 Fittingly enough, as the year winds to a close, we’re looking at second chances. Two of these novels are second books. Two of them feature characters reconnecting with former one-night stands. Two of them feature some of the most delightfully terrible decision-making I’ve seen in some time. All of them are worth a second look, even at one of the busiest times of the year.

We begin with an ending: Olivia Dade’s SHIP WRECKED ( Avon, 403 pp., paperback, $16. 99), the third and final installment in a smart, stellar contemporary trilogy.

No man is an island, but Peter Reedton wishes he were. He’s put most of his energy into his acting career, honing his considerable talent on small background parts. Now he’s landed a meaty romantic role in “Gods of the Gates, ” and filming will send him to a tiny piece of rock off the Irish coast for several years.

Unfortunately, he won’t be alone. His co-star is a Swedish bombshell — and Peter’s most memorable one-night stand.

Maria Ivarsson is built like a Valkyrie and has the same take-no-prisoners approach to life. She’s determined to make their chilly Irish island into a home for as long as they’re there. Although close-up angles and close quarters only stoke the heat between Philip and Maria, they know falling back into bed would be career suicide.

We all love a found family and this book has that — but it also has a tight focus on our two leads’ inner journeys that the current wave of trope-forward contemporaries don’t always deliver. Part of that is the long time span: “Ship Wrecked” is concurrent with both the prior ones in the series, and Dade takes full advantage of having literal years of time to play with. It’s not as epic as, say, Aster Glenn Gray’s spy romance “Honeytrap, ” but it’s pleasing to see a final series book that spans the whole “Gods of the Gates” production schedule. A banger of a finish, and an absolute joy.

And then again during the a cappella concert.

And then while visiting over winter break. And then — well, you get the idea. It’s a sitcom firehose of problems, self-inflicted as sitcom problems often are, awkward and humiliating and verging on dangerous.

There are gentle approaches to fraught tropes, and then there are books that wallow in the mess. This book is mess with a capital M: I chortled when Cassie’s roommate texted in bafflement: “Also wtf just control yourself? ” Cassie and Erin’s relationship is a string of small but incredibly unwise choices that inevitably pull them into full-blown disaster.

Which is, of course , what makes it so much fun for the reader. “Oh noooo, ” I kept whispering, rapt with secondhand excruciation.

It’s wonderful when a second novel turns out this well. Wilsner’s Hollywood-set debut made me feel a shade more anxiety than I enjoy in my romance, but this one struck just right, with a mix of college-party shenanigans and family-holiday pressure that felt real enough to relate to but escapist enough to enjoy.

Mess is also not a bug but a feature in OCEAN’S ECHO (Tor, 480 pp., $27. 99) , Everina Maxwell’s second sci-fi romance after her sleeper hit “ Winter’s Orbit. ” Like the first, this new book centers the forced-proximity bond — within space! — surrounded by layers of complex politics. I inhaled this one like I needed it to live.

Tennal is a reader (of minds) and a rebel on the run, since readers are usually conscripted into the army and placed under the mental control of an architect, a mind-manipulator. But when Tennal’s luck runs out and he’s shoved into the service, the architect ordered to sync with him is Lt. Surit Yeni, a man of gentle but unshakable goodness along the lines of “Discworld”’s Captain Carrot or “Disco Elysium”’s Kim Kitsuragi. Surit will not synchronize Tennal unwillingly, no matter who orders it — but if he refuses outright, command will just find someone less scrupulous. So , in true chaos muppet fashion, Tennal proposes they simply fake being synced, and keep their minds to themselves.

Reader, this works beautifully, until it doesn’t. And I could not put it down.

Sci-fi romance is really a high-wire act: An author has to build an unique external world while also establishing the compelling interior landscape. It’s thrilling when it goes well — and I’ve rarely seen it done better than it is here. It’s also rare to see a low-heat guide that also still feels adult and intimate. Rather than being a justification for plot-acceptable sex, the mind-sharing stands in place of it. It felt like a subtle joke about the old “didn’t know where one of us ends and the other begins” cliché — and it also meant the author didn’t have to wave away the extremely good reasons for Tennal plus Surit not to bang (chain of command, injuries, surveillance, imprisonment, active civil war).

After Wilsner’s surfeit of unresisted temptations, this was a perfect palate cleanser of seeing people do the right thing — even if, like Tennal, they just do it to annoy their adversaries.

For even more people-being-adorably-conscientious vibes, I recommend Viano Oniomoh’s CUPID CALLING (Independently published, 415 pp., paperback, $15. 99), where two contestants competing for the same bachelorette on a reality dating show end up falling for each other instead.

Contestant No . 1, Ejiro, is artistic and shy, but trying not to be; contestant No . 2, Obiora, is cocky plus competitive — and, after a tense confrontation early on, grows obsessed with Ejiro. Hard to keep eyes on the prize when your fellow bachelor’s smile is the most gorgeous thing you’ve ever seen. The way Obiora gets wrecked so early simply by lust is absolutely delicious: He’s trapped in torrid dreams and aching awareness whilst Ejiro quietly snubs and snarks at him, as well as the way this plays against type for them both adds some very satisfying depth to the premise.

This is high-drama, low-angst romance at its fluffiest because, honestly, our leads have both been through enough and what they both yearn for is someone offering warmth plus understanding. Satisfying the need to feel seen, to be allowed to be your full self without fighting, can be as stunning as any shocking plot twist. Sexier than the cartoon cover lets on, this one is tailor-made for fans of “The Charm Offensive, ” Alison Cochrun’s queer reality-show hit from last year.

Cochrun’s latest, KISS HER ONCE FOR ME (Atria, 368 pp., book, $17. 99) , continues her streak for foregrounding characters with mental struggles that are more than window dressing. Ellie, a failed animator, is trapped in a dead-end barista job and an awful apartment she’s about to become evicted from. So when a handsome coffee shop regular offers her a fortune if she poses as his fiancée for a family Christmas trip, Ellie says yes. Money can’t buy happiness, yet happiness can’t pay the particular rent, and it’s not as if Ellie has anyone important in her life. Not since that hot butch baker Jack broke her heart last Christmas.

Of course her fake fiancé’s sister, Jacqueline, turns out to be Jack. Cue snowbound high jinks, four-way romantic entanglements, a hilarious set of relatives and enough musical earworms to last you till January.

That’s right, this is the queer women’s “While You Were Sleeping” you did not know you needed this particular Christmas season. If books were drinks, this one would be a hot toddy: warm and frothy and sweet, along with just the right amount of bite to cut through the sugar. Perfect for warming the heart at the top of the fresh, unwritten pages of the new calendar year.