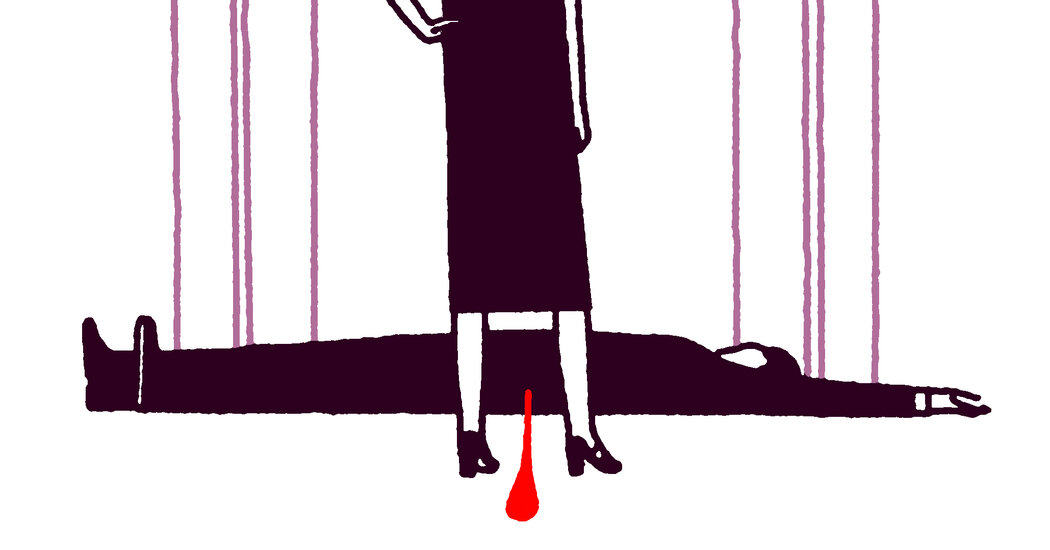 Vivian Kelly, the heroine of Katharine Schellman’s fizzy series debut, LAST CALL AT THE NIGHTINGALE (Minotaur, 312 pp., $27. 99) , longs for escape. It’s Manhattan, 1924, not long after women gained the right to vote and lost the right to drink alcohol. The Jazz Age giveth and taketh away, but Vivian, a seamstress with an adventurous streak, doesn’t know that yet.

She’s having too much fun dancing and carousing every night at the champagne-soaked Nightingale, “secondhand spangles sewn onto the hem of her dress. ” The fun at the speakeasy — which welcomes all races, sexes and genders, however furtively — is about to end, though: “The long, drawn-out wail of a trumpet could hide almost anything. Even the sound of murder. ”

When Vivian stumbles across a dead man in the alley behind the club, where she’s gone for a bit of fresh air, the Nightingale’s alluring owner, Honor Huxley, ropes her into investigating the crime. After all, “there wouldn’t be any police. … and if someone did come to collect the body, the odds of them carefully looking around for evidence of who committed the crime were practically zero. ”

What follows is a veritable trip through the demimonde, populated with the idle, dangerous rich and the desperate, hungry poor, all with motive and means to kill. Vivian is a terrific character, plucky and resourceful, determined to choreograph a different life for herself.

Alan Drew’s most recent novel, the harrowing plus memorable “Shadow Man” (2017), was a character-driven mid-1980s police procedural set in Southern California. Though I thought highly of it and its protagonists, the detective Ben Wade and medical examiner Natasha Betencourt, sequel possibilities never entered my mind.

I was wrong, and am glad of that. THE RECRUIT (Random House, 416 pp., $28. 99) brings back Ben and Natasha, deepening their personal relationship as their professional ties remain intertwined. Rancho Santo Elena, where they work, is a wealthy enclave of “brand-new pseudo-Mediterranean houses” plus “tidy shopping centers” that looks — to Ben, anyway — “like the kind of place Nazis might have built if they had occupied Ca. The cultivated perfection, the homogeneity of it. ” Beneath the town’s lacquered surface, ugliness brews: a growing white nationalist movement that Ben thinks is tied to a series of crimes, including murder and a deadly bombing.

Drew highlights what it’s like to be a lost teenager looking for community in the worst possible places, whether it’s a Vietnamese girl who loves someone she shouldn’t or a white boy putting his trust in poisonous ideology. That’s just one of the many ways in which “The Recruit, ” set in 1987, feels almost contemporary. At one point, Ben is watching a TV news report about the crimes. “There was a tone of shock to the broadcast, as though the particular reporters and the anchors couldn’t quite wrap their heads around the idea that these nice-looking white people could do such terrible things. ”

When Chris Offutt published their first out-and-out noir novel “ The Killing Hills ” last year , it seemed to surprise those accustomed to his more literary fiction. SHIFTY’S BOYS (Grove, 262 pp., $27) brings back the Army homicide investigator Mick Hardin and drops him into another case that he, by rights, should not be working on. Mick, after all, is recovering from an I. E. D. attack and getting out of the way associated with his sister Linda, the county sheriff up for re-election. Too bad a dead body turns up behind the Western Auto store. Especially too bad that it’s someone Mick knows and whose mother — the Shifty of the title — urges your pet to look into what happened.

The writing is top-notch, shot through with menace and melancholy. What will stick with me is Hardin’s stubborn strength, which could teeter into dangerous self-loathing but never does.

Finally, all credit to the independent publisher Pushkin Vertigo for introducing gems of Japanese crime fiction to American audiences. One current project is translating the particular detective novels of Seishi Yokomizo (1902-81), who took a pinch of John Dickson Carr and a dash of Agatha Christie in creating Kosuke Kindaichi, solver of impossible crimes over 77 volumes beginning with “The Honjin Murders. ”

Kosuke’s second outing, DEATH ON GOKUMON ISLAND (Pushkin Schwindel, 317 pp., paper, $15. 95) , superbly translated by Louise Heal Kawai, takes him to “an isolated island of granite, thick with red pine trees” in the Seto Inland Sea. As he was dying, an old friend had begged Kosuke, “Please go to Gokumon Island in my place … save my sisters . my three sisters will be murdered. ”

How can he refuse such a request? But it turns out that the sisters are known locally as “the most peculiar girls” on Gokumon, where Kosuke’s arrival coincides with a string of bizarre and gruesome murders. As deaths mount, the quirky, endearing detective strings together the clues to solve this fiendish puzzle.