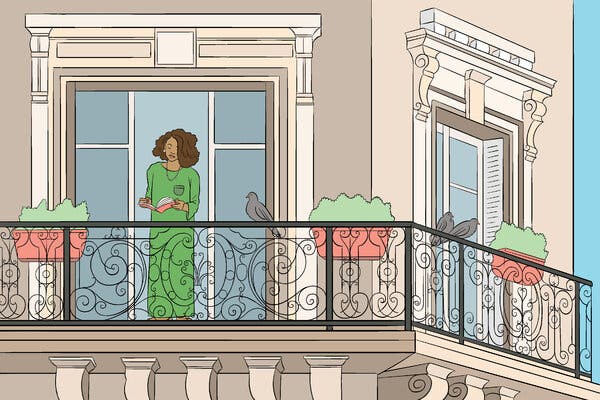 Leïla Slimani, winner of France’s Goncourt Prize, describes her Paris and recommends books that reveal hidden facets of the city.

This is the first story in a new series exploring the world through books. We’ve asked some of our favorite writers to recommend reading that helps you get to know their cities and tips on literary landmarks to check out. We’ll be traveling the world with them for the next few months, from Madrid to Mexico City to Istanbul and beyond. Sign up for the Books newsletter to make sure you don’t miss any stops!

A few years ago, a young Japanese tourist approached me on the Boulevard Saint-Germain. In a shy voice, she asked, “Where are the writers?” I didn’t understand what she meant. “I would like to see the writers,” she added. “In my guidebook it says that Paris is full of them.” Of course, I smiled and explained to her that times had changed and it was rather rare to see famous writers working in cafes. But I wouldn’t have dreamed of making fun of her, because that’s what I came to Paris for too.

As a teenager in Rabat, Morocco, I hung a photo of Simone de Beauvoir at the Café de Flore on the wall of my bedroom, along with one of F. Scott Fitzgerald and Ernest Hemingway on a terrace in Montparnasse. When I arrived in Paris at the age of 18, I had in mind the people’s parade for the death of Victor Hugo and the cafes on the Grands Boulevards where Émile Zola’s characters drank themselves into a stupor. For me, Paris was literature, its heart and its capital — the city of exiled writers, cursed poets and existentialist philosophers. And even today, I believe that there is no other city in the world that gives so much importance to writers: those of the past, whose ghosts continue to haunt the streets, and those of the present, too, whom passers-by recognize as they would a singer or an actress. I have never lived in another city where literature was so important.

What should I read before I pack my bags?

I would recommend a classic, probably Victor Hugo’s masterpieces “Les Misérables” or “The Hunchback of Notre-Dame.” Hugo was and remains one of the greatest geniuses of all time. And he captured, better than anyone else, the soul of Paris and its people. For a more contemporary vision, I love the “Vernon Subutex” trilogy, by Virginie Despentes. With the character of Vernon, a homeless record dealer, we discover the Right Bank of Paris — the bars, the crazy parties, the mixed neighborhoods. It is also an extraordinary depiction of a gentrified Paris where money rules.

What books or authors should I bring along with me?

In my opinion, you should read one book per district. Zola for the Grands Boulevards and the Ninth Arrondissement; I particularly like “Nana” and “L’Assommoir” (which has had various English-language titles). His description of the Parc Monceau in “The Kill” is also extraordinary. Patrick Modiano for “La Place de l’Étoile” (the first of three novels released in English translation as “The Occupation Trilogy”) and a dive into the Paris of the Occupation. Marguerite Duras’s “The War,” to relive the time when the Lutetia Hotel welcomed Holocaust survivors returning from the camps. James Baldwin’s “Giovanni’s Room” for Les Halles. I also love “Good Morning, Midnight,” by Jean Rhys, for its gorgeously evocative scenes of the Fifth Arrondisement in the interwar years. It’s perfect to read while you’re in Paris: The story is so sad, yet so utterly beautiful, following a woman who returns to the city after a long absence to reckon with a tragedy from her past. I also recommend “Disturbance,” by Philippe Lançon, a masterpiece and a heartbreaking book about a man who survived the Charlie Hebdo attacks and recounts his recovery at the Val-de-Grâce hospital.

If I have no time for day trips, what books can take me out of the city instead?

I love Normandy, only two hours from Paris — a land of great authors, such as Gustave Flaubert and Guy de Maupassant. I especially like Maupassant’s “A Woman’s Life,” an almost perfect novel. And if you go to the seaside, you must read the passages that Marcel Proust devotes in “In Search of Lost Time” to Balbec, an imaginary town inspired by Cabourg. And, of course, Michel Houellebecq’s “The Map and the Territory” for a vision of contemporary France: It is a brilliant, funny and cruel book about a France that is disintegrating and whose cities are being transformed into museums.

What books can take me behind closed doors and show me hidden facets of the city?

I love “Pigalle People,” by Jane Evelyn Atwood. Atwood, a photographer, met a group of sex workers in Pigalle at the end of the 1970s. She photographs them without any voyeurism but with great tenderness and tells the stories of these women who live on the margins, who take drugs, and who are also faithful friends. It is deeply moving.

“The Margot Affair,” by Sanaë Lemoine, is wonderfully Parisian without resorting to any of the usual clichés. It is a glimpse into the world of politics and journalism. The details of French food, daily routines and architecture are very well captured by the author.

Which writer is everyone in town talking about?

Annie Ernaux! She’s been writing autofiction for more than 30 years and has become a real feminist icon in France. There is also a lot of talk about Constance Debré, a radical writer who left her husband and her bourgeois life and who now embraces her homosexuality and total freedom. Her latest book, “Nom,” has caused a sensation.

What audiobooks would make for good company while I walk around?

Listen to poetry — in French! Poems by Charles Baudelaire or Paul Verlaine, while walking along the quays of the Seine. Or poems by Jacques Prévert, when night falls and you walk through the streets of Montmartre. You don’t need to understand all the words. It is like listening to music!

What’s a good place to curl up with a book? Any bookstores I should visit?

My favorite bookshop in Paris is Shakespeare and Company — for the choice of books, the welcome and the kindness of Sylvia Whitman, the owner. She is wonderful and will give you very good advice! But you can also read on a bench in a park. My favorite is the garden of the Palais Royal when the magnolias are in bloom. In winter, I recommend sitting in the back of a cafe, drinking a glass of wine while it is raining outside.

And for young readers, any recommendations?

“The Mona Lisa Mystery,” by Pat Hutchins, in which children team up to work out who stole the Mona Lisa from the Louvre, and “A Hundred Million Francs,” by Paul Berna, in which friends who play on the streets of Paris are surprised when a stranger offers them a lot of money for the broken old wooden horse they use in their games. When it is stolen, they set out to discover why it’s so special. Otherwise, “Rooftoppers,” by Katherine Rundell, is a great adventure story. And of course “The Extraordinary Adventures of Arsène Lupin,” by Maurice Leblanc, recently made into a Netflix series with Omar Sy.

Leïla Slimani is the author of “The Perfect Nanny,” winner of France’s Goncourt Prize and one of the Book Review’s 10 Best Books of 2018. Her most recent book is “In the Country of Others.”