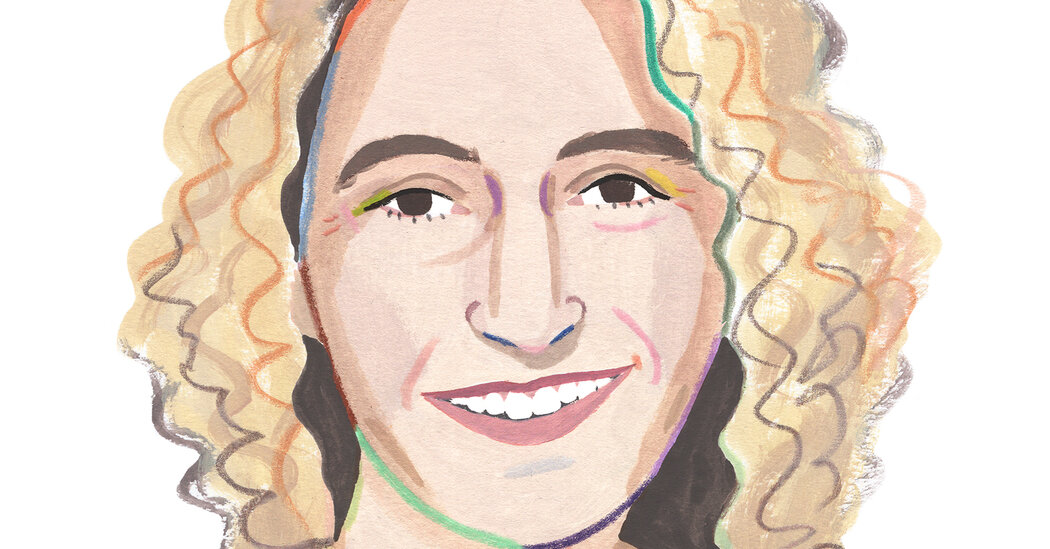 “I adore William James and Henry James,” says the author Kathryn Schulz, whose latest book is the memoir “Lost & Found” — “but did I also read E. L. James back in 2011? You bet.”

An ever-evolving combination of books I’m in the middle of reading (Rousseau’s “Emile,” which I decided to revisit just before the birth of my daughter), books I’m going to read next (Clint Smith’s “How the Word Is Passed”), books I’ve already finished but haven’t gotten around to shelving (Kirstin Valdez Quade’s “The Five Wounds” and Patrick Radden Keefe’s “Empire of Pain”), books I’m reading for work (“The Hound of Florence,” by the Austro-Hungarian author Felix Salten, better known for writing “Bambi”), books I’m reading for pleasure (John Steinbeck’s “The Grapes of Wrath”) and books that basically live there permanently (a lovely first edition of Robert Frost’s “West-Running Brook,” which was an anniversary gift, and another of James Baldwin’s “The Price of the Ticket,” which was a wedding gift).

Among contemporary novels, Miriam Toews’s “Women Talking,” which I admired as intellectually serious, morally challenging and formally interesting without being gimmicky; it is also spare of language yet shocking of stakes. Among the classics, Virginia Woolf’s “To the Lighthouse,” which I reread every handful of years and picked up again after my daughter was born. Those were leisurely days, strange as that may sound, and it somehow felt very precious to read such a familiar book under such new circumstances — though the “Time Passes” section undid me more than ever this time.

A couple of years after we met, my partner and I moved in together and combined our book collections, but the literary merger that’s more striking to me began when we fell in love. Inevitably I wanted to read all the books I’d missed that were important to her, which is how I finally got around to reading, among other things, Thomas Mann’s “The Magic Mountain,” Flannery O’Connor’s “Wise Blood,” Evelyn Waugh’s “Brideshead Revisited” and Jean Toomer’s “Cane.”

I’m somewhat less interested in reading under ideal circumstances than in the way that reading makes non-ideal circumstances vastly better than they would otherwise be. I have had countless annoying experiences rendered at worst manageable and at best sublime by the company of a book; back when I lived in New York, I used to love reading while waiting for the subway, because it meant I didn’t care if I stood there for 45 minutes before the train showed up. That said, I do love to read in bed at night before falling asleep.

I’m sure a great many people have heard of it, but I was unfamiliar with Friedrich Reck-Malleczewen’s “Diary of a Man in Despair” until shortly after the 2016 election, when Jamaica Kincaid loaned me her copy (which I’m embarrassed to say I never returned). The book is an actual diary that Reck-Malleczewen kept in secret between 1936 and 1944, constantly hiding it in his barn or burying it in the garden outside his house because it documented his contempt for and hatred of the Nazi Party. I would have been gripped by it at any time, but if I’d read it any earlier, I don’t know if I would have found his descriptions of the crassness, cartoonishness and sheer stupidity of Hitler quite so harrowing. Tragically, Reck-Malleczewen was right to fear the Nazis as well as despise them; he died in Dachau in February 1945.

A few months after I was hired by The New Yorker, I was invited to what I later learned was one of the first all-staff meetings in the history of the magazine. I vividly remember walking into the room and seeing Janet Malcolm and Jane Mayer and Roger Angell (in a baseball cap) and all these other luminaries and just being absolutely overawed. I’ve never been to another such meeting — on the way out, I heard Roger say that he looked forward to another one in 50 years — but I’m still in awe of my colleagues at the magazine. And I’m grateful for the work of countless other journalists as well; in light of the pandemic, I have to mention Ed Yong, Alexis Madrigal and Sarah Zhang, all of whom have consistently covered it in crucial and responsible ways.

Outside of the land of reporting: I admire (among many others) the poets Anne Carson, Louise Glück, Maurice Manning and Ross Gay; the novelists Marilynne Robinson, Colson Whitehead and C. E. Morgan; and those remarkable writers, including Zadie Smith, Francis Spufford and Jesmyn Ward, who are somehow truly excellent at both fiction and nonfiction.

How does your reading inform your own writing process, if it does?

Obliquely. When I’m stuck on something I’m trying to write I turn to other, better writers for inspiration, but only occasionally am I looking for something specific — as when I can’t find my way into an article and go read the openings of a couple dozen pieces I love just to remember how they work. But that’s an exception to the rule. In general, if I’m struggling with, say, a piece of science writing, I’m just as likely to reread Toni Morrison’s “Song of Solomon” as David Quammen’s “The Song of the Dodo.” The point isn’t to find a template for whatever it is I’m trying write; the point is to rekindle my love of and faith in all the things good writing can do.

I’m not sure I count any pleasures as guilty, with the possible exception of schadenfreude. I adore William James and Henry James, but did I also read E. L. James back in 2011? You bet. More to my taste, however, are some literary inclinations I’ve retained since childhood — among them, a love of mysteries and detective fiction and a fondness for medieval tales of all kinds. Thomas Malory’s “Le Morte d’Arthur” is rendered respectable by being six centuries old and T. H. White’s “The Once and Future King” is a genuinely outstanding book, but I have a very high tolerance for what you might call Arthurian trash.

What writers are especially good on father-daughter relationships?

I have the vague sense, which might be entirely unfounded, that father-daughter relationships are underrepresented in fiction compared to mother-daughter, mother-son and father-son relations. Still, Shakespeare and Sylvia Plath come immediately to mind, albeit for the narrower category of great literature about awful relationships; no one wants a father like those in “King Lear” or “Daddy.” In the realm of nonfiction, I was dazzled by the intellectual, emotional and visual sophistication of Alison Bechdel’s “Fun Home,” a graphic memoir about growing up with her father, a closeted gay man who died, seemingly of suicide, when she was in her 20s. And I was moved by Chimamanda Adichie’s “Notes on Grief,” in part because it is an anti-“Daddy,” an anti-“Lear” — which is to say, it is an adoring portrait of a beloved parent.

I don’t often write hatchet jobs, but I’m still persona non grata around Walden Pond for a critical piece I wrote about Thoreau, and legions of F. Scott Fitzgerald fans may never forgive me for publicly disparaging “The Great Gatsby” (including Joyce Carol Oates, who likened that act to spitting in the Grand Canyon). But at least one Fitzgerald devotee changed her mind about me, if not about my essay: She read it, she hated it, she met me, she married me.

Meteorites make two significant cameos in my forthcoming book, so I spent some time reading about the asteroid belt, where most of them originate. From Alex Bevan and John Robert de Laeter’s “Meteorites: A Journey Through Space and Time,” I learned this wonderful fact: Contrary to popular depictions in which a spaceship entering the asteroid belt immediately finds itself under bombardment, that belt is so enormous that, on average, any two asteroids within it are more than a half-million miles apart. That fact fits squarely into a category I cherish: information that alters our sense of the scale of existence.

I’m not sure I observe this distinction, since the way to my heart is through my prefrontal cortex.

Obsessively, but it never lasts. A while back, I wrote an essay about my mixed inheritance on this front. When I was growing up, my mother was both alphabetically and thematically fastidious about her books; the shelves for which she was responsible basically required call numbers and card catalogs. By contrast, my father’s organizational strategy involved tossing all the books he read into a pile by the side of the bed, which resulted in an enormous towering menace — literally seven or eight feet high — that we affectionately called “the Stack.” I regret that he never had the chance to write his own By the Book; his answer to “What books are on your night stand?” would have run to 15 pages.

Can I make it a potluck and invite Alice Waters, Dan Barber and Yotam Ottolenghi? Failing that, maybe Mark Twain, Dorothy Parker and Jane Austen. It’s good for the soul to laugh a lot over a meal.

Notwithstanding passionate endorsements by multiple people whose taste I admire, I remain unconvinced of the alleged importance and excellence of “The Education of Henry Adams.”

Based on the current evidence, “Goodnight Moon,” for the 500th time. Trust me, it never gets old when your baby beams up at you all throughout it. (And speaking of interesting facts, I’m forever grateful to the person who described it to me as a “lesbian classic”; turns out Margaret Wise Brown had a very interesting life.) But I’ve also been meaning to finally read Mary McCarthy’s “Birds of America,” and I’ve been hearing great things about Hanya Yanagihara’s “To Paradise,” so both of those are now on my night stand, too.