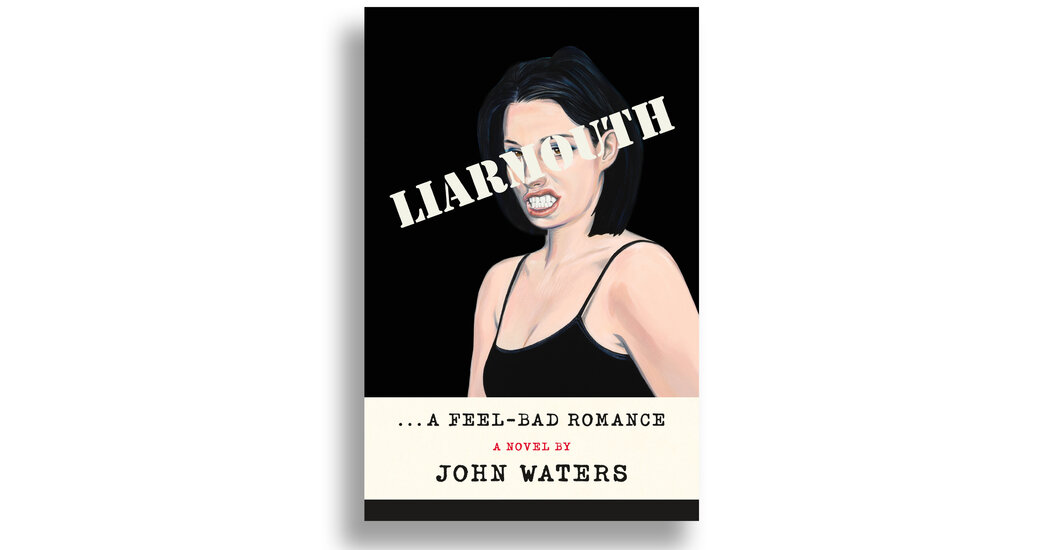 “Liarmouth” is about three generations of women in one family who plan to confront or kill one another. It also has a trampoline fun park.

In a recent essay for Gawker, Alexandra Tanner questioned why there are so many contemporary novels about “generations of women.” Often marketed as “sweeping or stunning, these books’ implicit promise to their readers, who are mostly women, is that they can, by reading them, understand what it is to be women from women,” Tanner wrote, observing that the premise, when abused, offers a spurious shortcut to poignancy and depth.

In the wake of Tanner’s essay, it was highly pleasurable to discover that the first novel from John Waters — film director, essayist, artist, non-woman, known hater of poignancy — is about … “generations of women.” A vibration of glee will twerk its way up and down a reader’s spine if she dares to imagine a team of publicists sweating to sell Waters’s filthy creation as a manual of insight into the female condition. (They haven’t tried so far, but maybe they should.)

From oldest to youngest, these women are Adora, Marsha and Poppy. Adora Sprinkle is an unlicensed Upper East Side plastic surgeon who performs cosmetic tweaks on pets. She has pioneered, along with Pekingese butt lifts and dachshund leg extensions, the implantation of faux testicles that can restore the stolen swagger of a neutered dog. Adora’s business is based on a simple insight: The human fear of aging can be projected onto anything. What is an un-Botoxed cat if not a walking, purring memento mori?

Adora’s estranged daughter, Marsha, is a thief who hates snitches, patriotism, children, food and people who stand instead of walking on escalators. She is appalled by the fact that Uber drivers are allowed to rate her. When a guy asks directions to the local mall, Marsha describes the wrong route simply to quench her appetite for random acts of sadism. Lying makes her feel “better, more intellectually advanced yet practical and, yes, prettier.”

Completing the lineage is Marsha’s daughter, Poppy, who runs a trampoline park somewhere outside Baltimore. The park has been shut down following injuries to several children but remains an illegal sanctuary for Poppy and her gang of adult trampoline fanatics, who have discovered that the best cure for emotional trauma is nonstop bouncing. (It’s free, it won’t cause sexual dysfunction and you can do it with your friends.) When Marsha shows up at the fun park and robs everyone in sight, Poppy bursts into a matricidal rage. She has been crossed by her mother one too many times. Marsha must die.

If “Liarmouth” had a plot, this would be the inciting incident. Instead, the novel unfurls as a tangled ribbon of manic events untouched by the logic of cause and effect. There’s a geographical impetus, sort of. The three women all move in a northeast direction toward Provincetown in Cape Cod, where they plan to confront or kill one another. How do they get there? Planes, trains, ambulances, a stolen Ford Explorer, a van with hydraulic fittings. Why Provincetown? Doesn’t matter.

You don’t go to the films of John Waters for a tidy three-act structure, and you don’t go to his essays for elements locking into place with the organizational splendor of a magic square. Naturally, there are qualities you shouldn’t seek in his fiction either. These include understated punctuation, expressions of interiority and sociohistorical breadth.

Like all novels, this one is bounded by the subjectivity of its creator. But Waters doesn’t even bother to throw his voice; every character thinks and speaks exactly like the author. This move only works, as it does here, in rare cases. The peasants in a Pieter Bruegel the Elder painting all look the same — like human-potato hybrids — and nobody marks it as a demerit.

What you get from John Waters is crotch punching, exploding televisions, geysers of blood, deviants, wackos and reprobates. You get phrases like “ridiculous genital display” and “penis probation”; scatology, tickle fetishes and satanic babies. You get teeming panoramas of freaks in thrall to their own depravity. (Another painter comes to mind: Hieronymus Bosch.)

Hyperbole is this writer’s native tongue. A man doesn’t get aroused; sexual adrenaline surges through his loins “like a tsunami wave ripping through a small Japanese village.” A woman doesn’t give birth; she endures a “saga of labor lunacy.” Waters writes toward the funny bone and the gag reflex. He is not at the mercy of political correctness or good taste or spelling conventions. Like any true weirdo, he seems to consider himself normal. When you read a book like this, you’re wandering into a maze of anarchy that is fully legible only to its creator.

Scads of other feral writers exist, but they are usually found in the catalogs of small presses — like Two Dollar Radio, Emily Books, Deluge, Pioneer Works and Inventory, to name a handful out of hundreds — not major publishers. “Liarmouth” is the exception that proves an irritating rule. Big publishing has always been insider territory, and consolidation hasn’t helped. (News releases will tell you otherwise, but if you seek truth in news releases, I have some exciting zero-risk crypto opportunities to tell you about.)

For real strangeness in novels, you usually have to voyage to lands that still tolerate the obdurate, the sleazy, the resentful, the offline and any other attributes presently considered unmarketable. “Liarmouth” is a good novel. It is a better gateway drug.