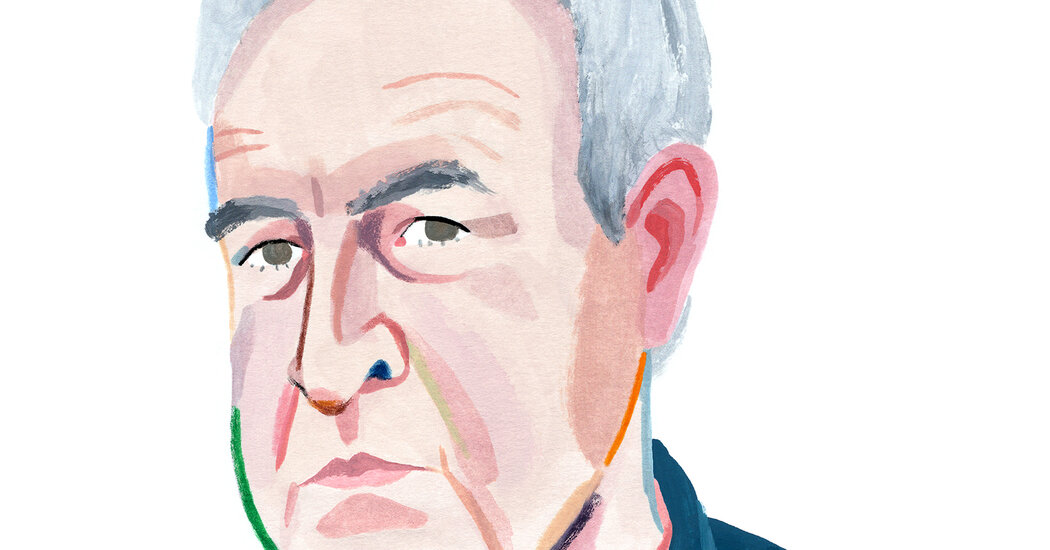 “I read very little new fiction these days, to my shame and regret,” says the author John Banville, whose latest novel is “April in Spain.” “So much of it seems to me mere prattle. Isn’t that awful?”

I’m rereading the Everyman’s Library edition of Thomas Mann’s “The Magic Mountain” in the magnificent translation by John E. Woods. Also “The Empress of Ireland,” an inexplicably neglected memoir by Christopher Robbins of the inexplicably forgotten Irish film director Brian Desmond Hurst, first published in 2004. The book is extremely engaging, sad and funny, and a sort of masterpiece in its way. Get it in the wonderful and wonderfully named Slightly Foxed Editions edition, if you can.

I’m considering having another go at “Middlemarch,” which I have never managed to finish. I find George Eliot’s didactic tone and suffocating authorial presence pretty well unbearable. Go ahead, Elioteers, shout abuse at me, I don’t care. And I‘m reading the “Annals” of Tacitus. Honestly, I am.

Oh, yes indeed. Though I can only read him in translation, I think Dostoyevsky is an extraordinarily clumsy and slipshod writer. Nabokov thought so too, which is good enough for me.

A butler at some grand house was asked by the novelist Henry Green for his definition of happiness, and the butler said something to the effect of, Sitting up in bed of a Sunday morning, listening to distant church bells and eating hot buttered toast with fingers that smell of sex. Add a book, and there you have it — though there’s the worry of that hot butter getting on the pages. Still, a risk worth taking.

Well, I can’t think of a book that no one has heard of. If you mean a neglected classic, I’d say “Herself Surprised,” by Joyce Cary. It’s part of the trilogy that includes the better-known “The Horse’s Mouth,” but it’s every bit as good.

How much trouble do you want to get me into?

Until last year, you used the pseudonym Benjamin Black when you wrote crime novels, and reserved your real name for quote-unquote literary books. Did your reading life change as well when you were writing as Black?

No, no. When I wrote my first crime novel, “Christine Falls” — first, if you don’t count “The Book of Evidence” — I used a pen-name just to let readers know I wasn’t playing an elaborate postmodernist joke. Lately I had to check back on some of the BB books in order to write a sequel to one of them, and since I can’t bear to read my own work I hit on the idea of listening to them in audio form. Timothy Dalton reads a couple of the early ones superbly, and since the voice was his more than mine, I was able to judge them with some objectivity. So much so that I thought, why the pseudonym? So I killed off my dark brother. As to reading others, I’ve always been a keen admirer of the classic crime writers, Chandler, Margery Allingham, Richard Stark, etc. And above all, of course, Simenon. I read him all the time, and he never palls.

I wouldn’t feel guilty even if I were only reading the back of a cornflakes box. The act of reading is extraordinary — whole worlds created out of black squiggles on a white ground — and I’ll read anything if it’s well written. Lately I revisited “Treasure Island” and was as thrilled and charmed as when I first read it as a boy. Stevenson is one of the great, unobtrusive stylists.

The existence of the “Wood-Wide Web,” that I heard of first in Peter Wohlleben’s “The Hidden Life of Trees.” A truly marvelous book, literally so, for it’s full of wonder, and wonders.

Which books got you hooked on crime fiction?

Raymond Chandler’s “The Long Goodbye,” Richard Stark’s “The Outfit,” Simenon’s “Dirty Snow.” And dozens of others.

What makes for a good mystery?

I would give as answer what William Goldman said of the movies — No one knows anything.

Do you distinguish between “commercial” and “literary” fiction? Where’s that line, for you?

Again, if the thing is well and honestly written then it’s good, as far as I’m concerned. There’s a wonderful little marginal admonition to himself in one of Charles Darwin’s notebooks: Never say higher or lower.

I don’t. They have a life of their own, so I never know where anything is.

I can’t think of any, given what I said above about the cornflakes box.

Avid. I used to cry when I came to the end of one of the Just William books, by Richmal Crompton. Also a little pamphlet called “Maggie’s Rosary,” by I can’t remember whom. I think it was the first extended text I read, at the age of 7 or 8, and it too made me cry.

I read very little new fiction these days, to my shame and regret. Somehow, now that I’m old, I don’t seem to need whatever it is fiction offers. So much of it seems to me mere prattle. Isn’t that awful?

Mann’s “Buddenbrooks” — I’m on a binge — in, of course, the Everyman edition.