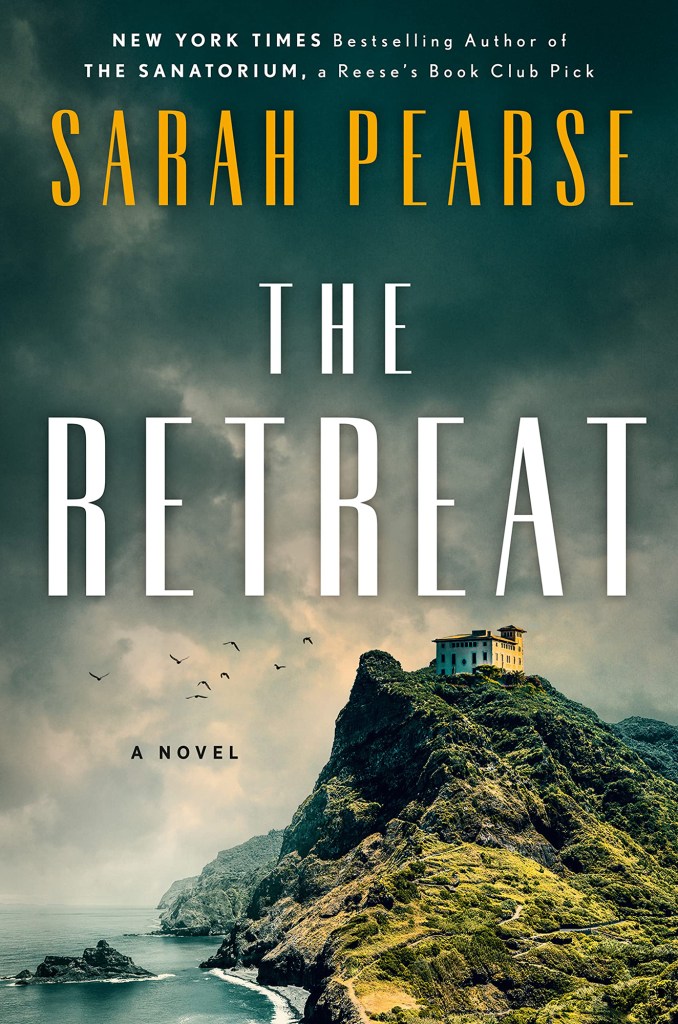 Sarah Pearse (Pamela Dorman)
A luxe wellness retreat has just opened on an idyllic island off the English coast. But the island — known locally as “Reaper’s Rock” — has a dark past, and was once the hunting ground of a serial killer. When friends arrive at the retreat looking for some relaxation, one woman winds up dead — and it doesn’t look like it was an accident.

Dwyer Murphy (Viking)
In mid-aughts Brooklyn, a former corporate lawyer picks up odd jobs from assorted clients. When a woman named Anna Reddick offers him $10,000 in cash to track down her missing husband, a bookseller she suspects of theft, it seems like it will be a straightforward case. But then the real Anna Reddick shows up, and things get complicated.

Kirstin Chen (William Morrow)
Ava Wong generally plays by the rules. But when she meets up randomly with Winnie Fang, her old college roommate from mainland China, she’s struck by her confidence. Winnie reveals the secret to her success: she’s got a successful handbag counterfeit business going, and she wants Ava to join her in some easy money exporting expert fake Birkins. What could possibly go wrong?

Clare Pooley (Pamela Dorman)
Every day, a magazine columnist named Iona sees the same people on her train from Hampton Court to Waterloo Station. She doesn’t know their names, and they never speak — that’s the first rule of commuting. But one day when one of the commuters chokes on a grape and is saved by a quick-thinking male nurse named Sanjay, the group of quiet commuters begins to speak to each other — and even become friends.

Nina Stibbe (Little, Brown)
Susan and Norma have been BFFs for decades, navigating life together even as it takes them on different paths. Thirty years after their friendship began in 1990s Leicestershire, Susan is beginning to second guess the choices she has made in love, life, and even friendship.

Elizabeth Day (Simon & Schuster)
When you are a couple that rents out the guest room to a stranger, things don’t always go as planned. Marisa and Jake are so happy — and with Kate boarding in their house, they have the financial flexibility to start trying for a baby. Except Kate isn’t good with boundaries, and the situation quickly goes completely off the rails.

Taylor Hahn (Anchor)
Life is going according to plan for Georgina Wagman: She’s a partner at a law firm, where she works with her handsome husband. But when she walks in on him one night with a junior associate, Georgina decides she needs a new plan. Rather than divorce, she suggests they both become swingers.

Allie Reynolds (GP Putnam’s Sons)
After the drowning death of her boyfriend three years ago, surfer Kenna Ward swore off the water for good. When her best friend Mikki announces her engagement to a man who’s a member of a tight-knit group of surfers, Kenna travels to a remote Australian beach to help her celebrate — and is lured back into the surfing scene. Then members of the group start disappearing.

Marcy Dermansky (Knopf)
From the author of “Very Nice” comes this book about Allison Brody, a 32-year-old woman who buys a beach house on the coast and owns it for all of a week — before a hurricane destroys it. Left completely adrift, she eventually makes her way back home and spends the next few months looking for a new plan — in the form of a rooftop swimming pool.

Elin Hilderbrand (Little, Brown)
Hilderbrand is the absolute queen of the beach reads, and her latest offering is dishy and fun, as a classic Nantucket hotel attempts to reinvent itself with a new billionaire owner. It might look glamorous on the outside, but behind closed doors, there is plenty of dysfunction among the staff, drama on the guest side, and a bad reputation the place can’t shake from a tragic fire in 1922.

Liska Jacobs (MCD)
Keith and Kit Collins are newlyweds, and they’ve just been given a free honeymoon at the iconic Pink Hotel, a Beverly Hills landmark. But there’s a catch: The general manager wants to hire Keith, who is also in the hotel business, and Keith is buying what the Pink Hotel is staying — glamorous guests, nighttime debauchery, and all. As Keith and Kit are drawn into the world of the hotel, their new marriage suddenly seems very tenuous.

Jenny Mollen (Nacelle Books)
Megan is an unemployed copywriter with plenty of talent but only a few low-paying gigs here and there. With two young kids, she’s struggling to find her old identity. When she meets A-list momfluencer Daphne Cole, Daphne seems to have totally cracked the code to being a cool mom with a lucrative side hustle. The two become fast friends — and Megan is invited into a world of power mom supper clubs and luxe wellness rituals.

Fiona Barton (Berkley)
In the seaside town of Ebbing, there is constant conflict between locals and the rich weekenders who come with disposable income and plans to renovate old bungalows into luxury homes. Elise King is a detective there, and she’s called into action when a man goes missing the first night of a weekend music festival.

Jonathan Vatner (St. Martin’s Press)
From the author of “Carnegie Hill” comes a delightful tale about bridesmaids gone rogue. Iris Hagerty is fed up with weddings: She’s over just about every aspect. She vents online about being a bridesmaid (all too often, to ungrateful brides) and the post sparks a movement. Soon, there’s a Facebook group of bridesmaids who just aren’t going to take it anymore — and Iris is their new leader.

Iman Hariri-Kia (Sourcebooks Landmark)
Noora is an aspiring writer who can’t believe her good luck when she lands a job as assistant to Loretta James, editor-in-chief of iconic magazine Vinyl. But Loretta is awful, the print side of the magazine is fighting for its existence, and Loretta is constantly trying to undermine the digital director. Hilarious shades of “Devil Wears Prada” for 2022.

Megan Goldin (St. Martin’s Press)
“STAY AWAKE.” That’s what the inked message on Liv Reese’s hand says when she wakes up in the back of a taxi with no memory of how she got there. No phone — she must have lost it. In its place is a bloody knife and reports of a crime scene on the local news.

Bernadette Jiwa (Dutton)
In 1990s Dublin, the country of Ireland is entering an economic boom and Joan is a part of it. Life is good. Until a letter arrives one day from Emma, the daughter she and her husband gave up for adoption 30 years prior — and she has a serious favor to ask.

Ashley Winstead (Sourcebooks Landmark)
At an upstate New York college, Shay Evans and her best friends met a man — their roommate’s father — who gradually drew them into a strange cult that almost destroyed their lives. (Yes, this one is ripped from the headlines of the Sarah Lawrence cult story). Shay and her friend Laurel managed to escape — the others did not. Eight years later, she hears that Laurel has committed suicide — and she returns to the college looking for answers.

Emma Donoghue (Little, Brown)
From the author of “Room” comes something completely different from any previous novels Donoghue has written. In 7th century Island, three men set out for an island their leader has envisioned in a dream, determined to leave the world behind. What they find is nothing short of extraordinary.

Megan Miranda (Scribner)
In recent years, Cutter’s Pass has become notorious as a town where hikers go — and are never seen again. Abigail Lovett has been working there, at the Passage Inn, for the past 10 years, and loves the town and its people. But with the investigation of another disappearance, Abigail begins asking questions — and she doesn’t always like the answers.

Nina Sadowsky (Bantam)
Dr. Laina Landers is a successful therapist who is proud of the job. But someone has it in for her, and knows that the easiest way to get to her is through her patients, who begin receiving disturbing “gifts” that mock their secret traumas.

Leah Franqui (William Morrow)
Puerto Rico is where Elena Vega’s father lives — but no one has seen him since Hurricane Maria. Troubled by alcoholism and bipolar disorder, he is a man given to disappearing, leaving his daughter to pick up the pieces. Elena returns to the battered island and starts searching for him, trying to solve the mystery of a man she doesn’t know very well.

Jennifer Weiner
Pandemic relationships can lead to quick engagements, as Sarah Danhauser learns when her 22-year-old stepdaughter Ruby announces her engagement. Ruby has set a date — three months from now! — and is planning the event at Sarah’s mother’s house on the Cape. As weddings have a way of doing, the event starts to dredge up long-simmering secrets and delicious assorted drama.

Alison B. Hart (Graydon House)
It’s a big day at the Stabler estate, where famous director Ted Stabler and his power player wife Holly will be hosting the Hollywood event of the season. That’s when Ted’s former business partner, Phoebe Lee, decides it might be a good time to pay him a surprise visit — while Ted’s assistant, the ambitious Zanne Klein, must figure out how much her job is actually worth to her.

Elizabeth Hand (Mullholland Books)
When Grady Kendall sees a job listing for a live-in caretaker at a Hawaii estate, he applies for it on a whim, dreaming of something besides another Maine winter. He gets the job and arrives at the estate on Hokuloa Road, ready to settle in. (But first, a 14-day quarantine: This takes place during the pandemic). The estate is lovely, and the island is stunning. But it seems Hokuloa Road has a reputation for ghosts, strange terrifying figures, and disappearances.

Tom Perotta (Scribner)
Tracy Flick is back! The protagonist of “Election” — immortalized by Reese Witherspoon — is now a hardworking assistant principal at a suburban high school in New Jersey. Life has not worked out exactly as she had imagined, but she’s determined to change this with a new promotion she’s chasing — and big new plans.

Nancy Thayer (Ballantine Books)
Over two decades ago, four strangers rented bargain-basement rooms near a Nantucket hotel and ended up becoming fast friends during a magical few months that changed them all. Twenty-six years later, they reunite at the hotel — which one of their friends now owns.