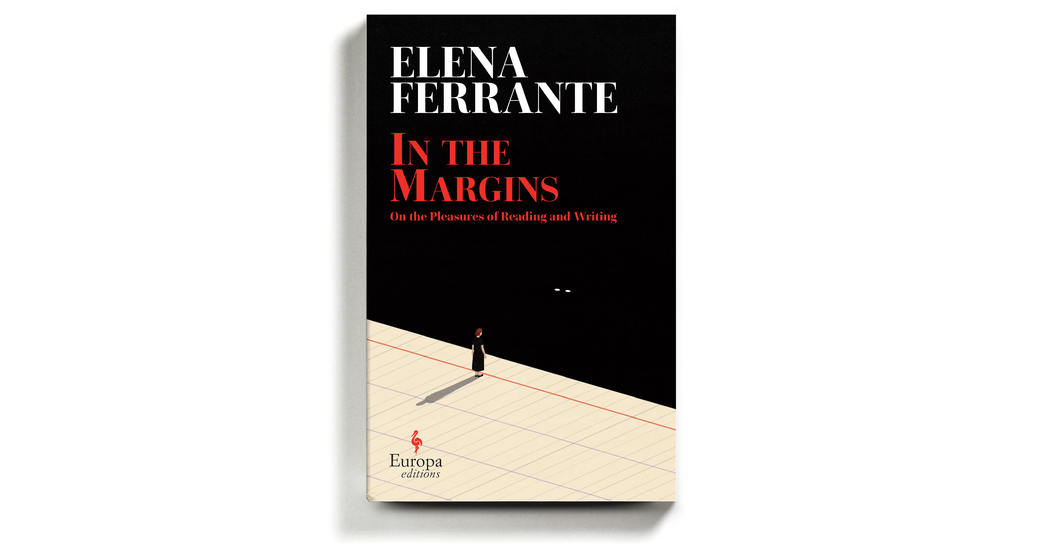 In pieces both philosophical and practical, the pseudonymous author shares her conceptions of writing and reading.

IN THE MARGINS
On the Pleasures of Reading and Writing
By Elena Ferrante
Translated from the Italian by Ann Goldstein
111 pages. Europa Editions. $20.

A couple of years ago, Elena Ferrante accepted an invitation to deliver three lectures to the public in Bologna, Italy. The request was oceanically broad: Ferrante was asked to speak about anything that might be of interest to a general audience. Anything! Then the pandemic happened, and public life ceased.

But Ferrante had already written the texts. As a result, they were delivered belatedly — in late 2021, by an actress named Manuela Mandracchia performing as the pseudonymous Ferrante. A portion of the event is available on YouTube, where one can watch Mandracchia-as-Ferrante speak to a masked audience. Her pouf of hair glows magenta beneath the stage lights; her hand gestures are hypnotic. Even if you don’t understand Italian, it’s worth a glance to see how the lectures — designed for oral delivery in Ferrante’s native language — burst to life when they emerge from a human body.

The fact that the body does not belong to Ferrante is conceptual icing on the cake for English-language readers. An author writing under a pen name for a faraway audience in a foreign tongue is already three layers of interpretation away from readers who may now read these incandescent lectures, rendered into English by Ferrante’s longtime translator Ann Goldstein. “In the Margins: On the Pleasures of Reading and Writing” also includes a fourth lecture, originally delivered at a separate conference by a person who was also not Ferrante.

Ferrante conceives of the writer, with a nod to Virginia Woolf, as a “hypersensitive plurality all concentrated in the hand provided with the pen,” less an embodied entity than a flood of “pure sensibility that feeds on the alphabet.” Thus, perhaps, her choice to remain anonymous — a choice that has been goosed by the possible revelation of her identity by an Italian journalist, using financial and real estate records. If you think enigma is more interesting than doxxing, however, it’s easy to remain unaware of the author’s supposed real name. In this and in other works, Ferrante reminds us what a gift anonymity can be to the reader. How refreshing to access words without fighting through the obscuring fog of a “brand.” (If anonymity is its own sort of brand, at least it is one with a minimum of noise and commotion.)

In any case, the author has responded generously, in her own way, to the question of “Who is Elena Ferrante?” The datum of a name is nothing next to the bounty of self-disclosure in these lectures and in “Frantumaglia,” a collection of interviews and correspondence originally published in 2003 and translated into English (also by Goldstein) in 2016. For those who wish to burrow gopher-like into the author’s mind, Ferrante has prepared a tunnel.

In one lecture, she refers to a notebook she kept as a teenager. “The writer,” her young self wrote, “has a duty to put into words the shoves he gives and those he receives from others.” Interesting that “the writer” is configured as male — an assumption that Ferrante claws into at other points in the book. But equally salient is the idea that prose is a translation of violence into language. Ferrante’s fiction brims with combat. The physical encounters in her novels — not just those that are blatantly assaultive, but those regarding sex, romance and family — often prickle with a sense of repulsion.

She writes about balancing her taste for boundaries and tidiness — for staying within the margins — with a competing lust for disorder and clamor. Love stories become interesting to Ferrante at the moment when a character falls out of love; mysteries gain intrigue when she understands that the puzzle won’t be solved; a bildungsroman strikes her as satisfactory “when it’s clear that no one will be built.”

In her theory of writing, Ferrante stands opposed to someone like Joan Didion. Didion famously insisted that she wrote in order to find out what she thought. (“Had I been blessed with even limited access to my own mind there would have been no reason to write.”) In Ferrante’s case, the act is a flawed transcription of what she calls “the brain wave.” For Didion, everything was gained in the voyage from mind to pen; for Ferrante, much goes missing.

As much as “In the Margins” is a philosophical monograph on the nature of writing, it is also a practical manual. Ferrante furnishes tips. She doesn’t present them as such — there’s no prescription, only an outline of what she’s learned and how it’s helped her (and by implication, how it might help anyone else).

Among the non-tip tips: Surrender your ambition to reproduce, in grammar and syntax, the “whirlpool of debris” that constitutes reality. Instead, study the work of your favorite authors for the “rich repertory of tricks” they use to invent, rather than document, what is real. If writing in the third person doesn’t work for you, try first person.

We’ve discussed Ferrante’s approach to writing. What about reading? For one thing, she is a rereader, circling the same texts for decades. She describes the hallucinogenic realization that to read a book is to absorb, consciously or not, all the other books that influenced that book, as well as the books that influenced those books, and so on; to interpret even one paragraph on a page is to vector endlessly back in time.

She cites Laurence Sterne’s “Tristram Shandy” and Denis Diderot’s “Jacques the Fatalist and His Master” as “books that discuss how difficult it is to tell a story and yet intensify the desire to do it.” This collection, brief and clear as it is next to those other volumes, does the same.