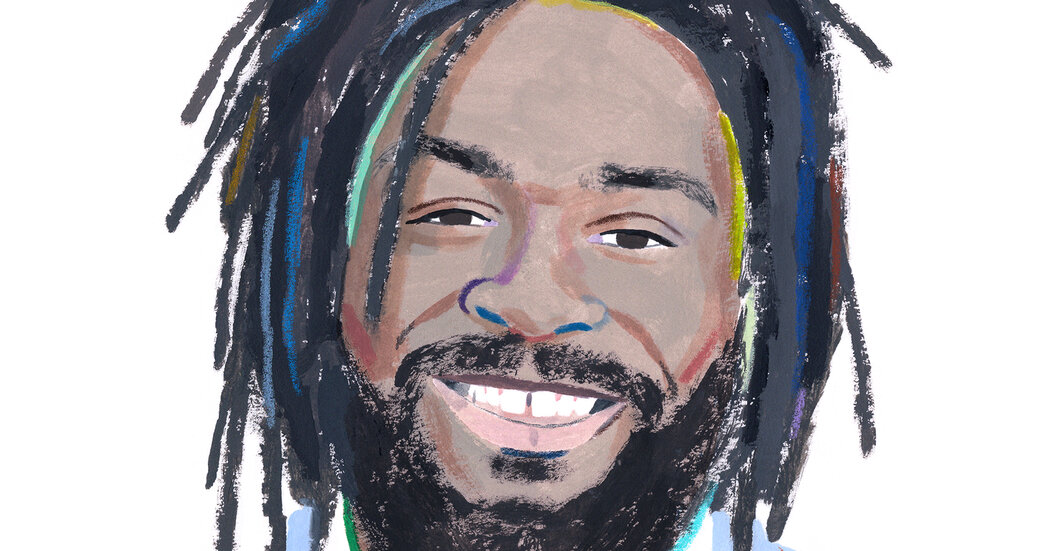 “It has more to do with tone than anything else,” says the current National Ambassador for Young People’s Literature, Jason Reynolds, whose latest book is “Ain’t Burned All the Bright” (in collaboration with the artist Jason Griffin). “With a shift in tone, ‘Salvage the Bones’ might be a young adult novel. And that would make it different, certainly, but not a lesser work.”

Right now, it’s an advance reading copy of Ocean Vuong’s latest collection, “Time Is a Mother,” which is remarkable. Also, Jamaica Kincaid’s “Talk Stories,” John Irving’s “A Prayer for Owen Meany,” which I’m rereading, and an ARC of NoViolet Bulawayo’s “Glory,” which is genius. Honestly, I keep books on my night stand for the morning. I like to wake up, read a few pages of something to spark my creativity and the work I might do that day. At night, I look at art books that I keep stacked in the nest cubby beneath my night stand.

You know, if I’m being honest, the last book that I really loved (which makes it great to me) was probably “Iggie’s House,” by Judy Blume. I’d read it long ago, but I recently reread it and suddenly it feels even more … alive. It’s not one of her most popular books, but when I think about the fact that it was published in 1970 and addresses white flight, I’m enamored by Blume’s courage and decision-making in the work.

A fall day in Arizona, preferably in an outdoor bathtub. There’s something about a desert breeze, the silence and stillness of the terrain, and the big sky that always gets me. Yes, even more than the beach. Oh, and the book needs to be a tougher read. Something I have to concentrate on to enjoy.

I’m not sure it’s completely unheard-of, but “Exercises in Style,” by Raymond Queneau. I reference it all the time whenever I want to shake up my style or laugh at all the ways one might say the same thing.

Also, “Beloved.” These answers are connected because I think “Beloved” is a story that should be read, or at least attempted, multiple times. It’s a novel one has to grow into.

Sheesh. So many. Let’s start with one of your own. Actually, one of our own. Wesley Morris. I love his work and I think he has a unique way of making odd but ingenious connections. Another person who does this is Hanif Abdurraqib. Also Camonghne Felix. I’d be remiss if I didn’t mention Jesmyn Ward, Kiese Laymon, Ali Smith, A. S. King, Kacen Callender, Amber McBride, Elizabeth Acevedo, Mahogany L. Browne, Rasheed Copeland, Candice Iloh, Dhonielle Clayton, Solmaz Sharif, Elena Ferrante, Mitchell S. Jackson, D. Watkins, Kwame Alexander, Renée Watson, Jacqueline Woodson, and the list goes on and on. There’s not enough time or space for the writers who inspire me. I’m so grateful to be working during this time.

How do you distinguish Y.A. books from adult fiction?

I’m still trying to figure that out. You know, I’m working on some adult fiction right now, and based on what I’m learning from my edits, it has more to do with tone than anything else. My issue is that people create this massive chasm between the two, which sometimes feels like a way to diminish the work written for young people. Because of my disdain for that, I’ve tried really hard to push against the dividing line but ultimately, I’m learning there is a difference. I’m just not sure it’s as drastic as we try to make it. With a shift in tone, “Salvage the Bones” might be a young adult novel. And that would make it different, certainly, but not a lesser work.

Which young adult books would you recommend to people who don’t usually read Y.A.?

“Monster,” by Walter Dean Myers, “Shout,” by Laurie Halse Anderson, “Maus,” by Art Spiegelman, “Fun Home,” by Alison Bechdel, “Brown Girl Dreaming,” by Jacqueline Woodson, “Nothing,” by Janne Teller, “Platero y Yo,” by Juan Ramón Jiménez, and “Monday’s Not Coming,” by Tiffany D. Jackson. There’s many, many more, but this is a start.

I’ll tell you, my dear, late friend Brook Stephenson is the man who introduced me to the short story. I used to groan about how I didn’t understand them and therefore would never attempt them, and he suggested I read “Solo on the Drums,” by Ann Petry. Maybe it was timing. Maybe it was the story. But it broke me open and showed me the possibility of the form. It drew me much closer to him. Hell, maybe it drew me much closer to myself.

Character and language. I want writers to create a protagonist I want to eat with. And I want them to use language I want to … eat.

I love this question. So, I have one of those big bookshelves in my office with 10 separate shelves. And instead of organizing the case from top to bottom, I alphabetize each individual shelf so that when it’s time to add a book, I don’t have to shift the entire system. Instead, I have 10 possible places the book could go, and still be in order. Of course, there are still 200 books on my office floor. But let’s not talk about that. Next question.

The entire Captain Underpants series. But you’d only be surprised if you don’t know me.

When my father passed away, I was given his devotional book, “Grace for the Moment,” by Max Lucado. It’s not a book I would’ve ever bought, and reading daily devotionals isn’t really my thing, but to have this item with hundreds of tabs in it because he’d reread it every year is incredibly special. Sometimes I try to pick a page that he’s marked all up just to see why he kept coming back to it. It makes me feel like there’s something he’s trying to teach me. Still.

This is the question I’ve been waiting for! OK, so this is selfish of me, but how about I excuse myself, and invite a fourth to take my place. Toni Morrison, Jesmyn Ward, James Baldwin and Kiese Laymon. We can tape it so I can see it later. I don’t need to be there. But I’ll make fish plates beforehand. And leave a deck of cards on the table. And a case of wine. And what I’d hope to see (on the playback) is a tremendous amount of laughter, and maybe even a few tears. Jesmyn and Kiese will probably deflect all this but, hey, we love y’all! And I’m certain they would’ve too.

Kiese Laymon. Not only does he have a particular command of language, I know he works with love in mind. If anyone can wield honesty in both a brutal and careful way, it’s Kiese. And that’s what I’d want.

I think I’m gonna check out the Magritte biography by Alex Danchev.