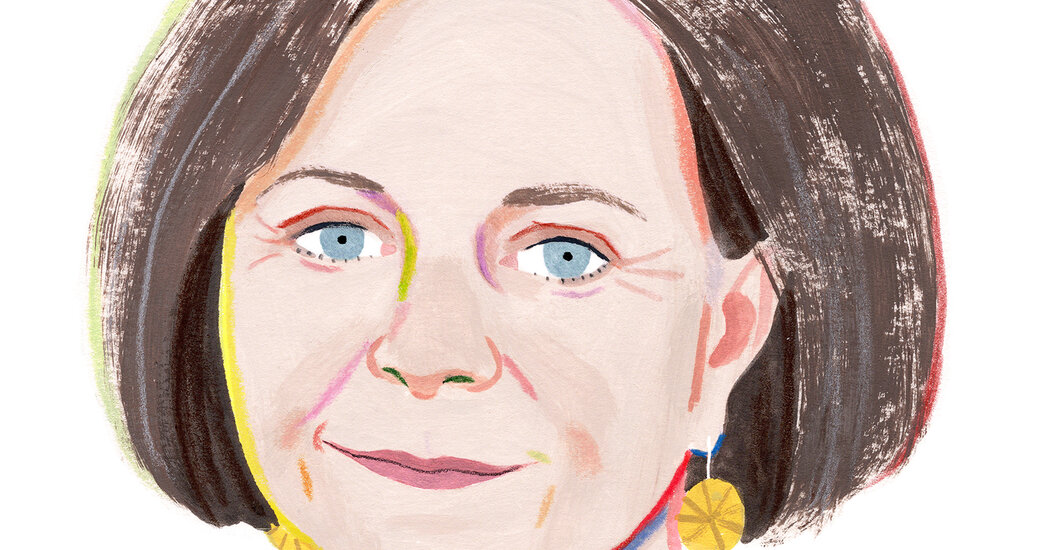 Permanently, three slim volumes of a series called “A Return to Poetry.” In each, 10 notable Australians choose 10 favorite poems and say why those poems speak to them. I dip into these books often and I’m sad they discontinued the series. Alongside them presently I have “Worn,” by Sofi Thanhauser, an engaging dive into the human and environmental cost of what we put on our backs; two novels, “Master of the Revels,” by Nicole Galland, and “The Lioness,” by Chris Bohjalian; and Gish Jen’s new short stories, “Thank You, Mr. Nixon.”

I am still reeling from “The Overstory,” by Richard Powers.

Let me whisper this, because I am mortified: “Middlemarch.”

The “Remembrance of Earth’s Past” trilogy, by Liu Cixin, is full of insight into everything from China’s Cultural Revolution to why we have yet to experience first contact, and why we maybe shouldn’t want to. But there’s a clunkiness to some of the sentences and I can’t know if it’s the writing or the translation. Alas, it’s too late for me to learn Mandarin in order to get a definitive answer.

A cold winter’s day, a steaming, lavender-scented bath, any good book, no need to be anywhere else for an hour or so, and no guilt about wasting hot water.

“No Man on Earth,” by Walter Moudy. The only other person I know who has read it is my son, because I pressed it on him.

I taught writing at Harvard last year and half my students had never read a Shakespeare play. That set my hair on fire.

I think you could read both “Gilead” and “Housekeeping,” by Marilynne Robinson, as a younger person, but you should do yourself a solid and read them again once you’ve had some tread worn off your tires.

Anyone who is standing up for the truth against the toxic sludge of Murdoch-enabled lies.

I love Michael Robotham’s detective-adjacent fiction and I’m not the least bit guilty about it.

What writers are especially good on American history, in fiction or in nonfiction?

In nonfiction, the prolific and protean Jill Lepore, especially her biography of Ben Franklin’s sister, “Book of Ages,” a painstaking unearthing of a disregarded woman’s voice. Similarly, in “Bound in Wedlock,” Tera W. Hunter lets us hear the unheard stories of love and marriage among the enslaved. Drew Gilpin Faust on the Civil War; David W. Blight on Frederick Douglass; Charles E. Rosenberg on gruesome diseases. Nikole Hannah-Jones, who is, like my late husband Tony Horwitz, a reporter on the history beat, revealing the cost of the truths we deny and the myths we embrace. In fiction, my favorite American historical novel is “I Should Be Extremely Happy in Your Company,” by Brian Hall, about the Lewis and Clark expedition. It’s full of insights earned by deep research and is a master class on voice and character.

My books organize me. Poetry demands to be in the entry hall, plays commandeer chairs in the TV room, classics loom in the living room, books about food clutter the kitchen, contemporary fiction spills over walls of recently built shelves in the guesthouse, books for my current research teeter in piles by my desk, while books from past research march up to the barn, which was Tony’s study. There, tomes on lead mining in the Pennines and the letters of Bronson Alcott keep company with every book ever written about the Civil War, which was Tony’s passion. And a pair of vertical metal shelves contains a motley selection of titles, united only by the fact that all their authors have actually stayed with us.

That the plural of octopus is octopuses, not octopi, since you can’t put a Latin “i” ending on a Greek word. Just one of the interesting things I learned from “The Soul of an Octopus,” by Sy Montgomery.

We have to reframe the story of climate change so that it is not only about renunciation and loss, but also about possibility and joy. A wild lawn full of bees and wildflowers is more beautiful and less work than a dull expanse of toxic ChemLawn; a sunlight-powered electric car happens to be a more sporty drive than a gas vehicle, and a pre-owned treasure discovered while socializing with neighbors at the local Dumptique brings more satisfaction than a plastic tchotchke one-clicked on the internet. It’s not about giving things up but finding better ways.

Wit, in all its guises. From Jane Austen to Andrew Sean Greer I love a book that makes me laugh while revealing deep truths about human nature.

“How to Land a Plane,” by Mark Vanhoenacker. As the author pragmatically observes, you never have to take off, yet you may have to land. As someone who lives on an island and has to fly in tiny planes with pilots who may not always appear to be in the peak of fitness, I find that having this book on hand brings a modicum of comfort. And Vanhoenacker writes beautifully about flying. I love his book “Skyfaring.”

How can you feel without thinking? In what world, or species, would those two qualities be separable?

I love elegant, insightful essayists such as Helen Garner, Ann Patchett, Michael Lewis, George Packer, Annie Dillard, W.E.B. Du Bois. I’m a reluctant reader of my own genre because I become too frustrated when overbearing research crushes the soul out of the story, or when careless inaccuracies wrench me out of period. There was no train to Fitchburg in 1840. There were no camels in Israel before 2000 B.C. And no one used the word “mauve” for a color until at least 1796. (Admission: That one was my bad, in “Year of Wonders,” set in 1665.)

If you could require the president to read one book, what would it be?

“The End of Nature,” by Bill McKibben, with the publication date of 1989 picked out in highlighter. It might remind him we’ve faffed about on this crisis for more than three decades so it’s time to stomp on Joe Manchin and get a climate package passed.

Do you remember the last book you put down without finishing?

“Moby-Dick,” again. Despite Nathaniel Philbrick’s persuasive essay on the virtue of the text, that whale just keeps eluding me.

First, I would bring back Tony Horwitz, because he was more fun at a dinner party than anyone I know. Then, because I think it’s rather rude — and a little dull — to invite writers without their partners, I would have my fellow Australian Tim Winton and his wife, Denise, who is a marine scientist. I’d add Margaret Atwood and bring back her partner, Graeme Gibson, a passionate conservationist.

What will you read next?

“All That She Carried: The Journey of Ashley’s Sack, a Black Family Keepsake,” by Tiya Miles.