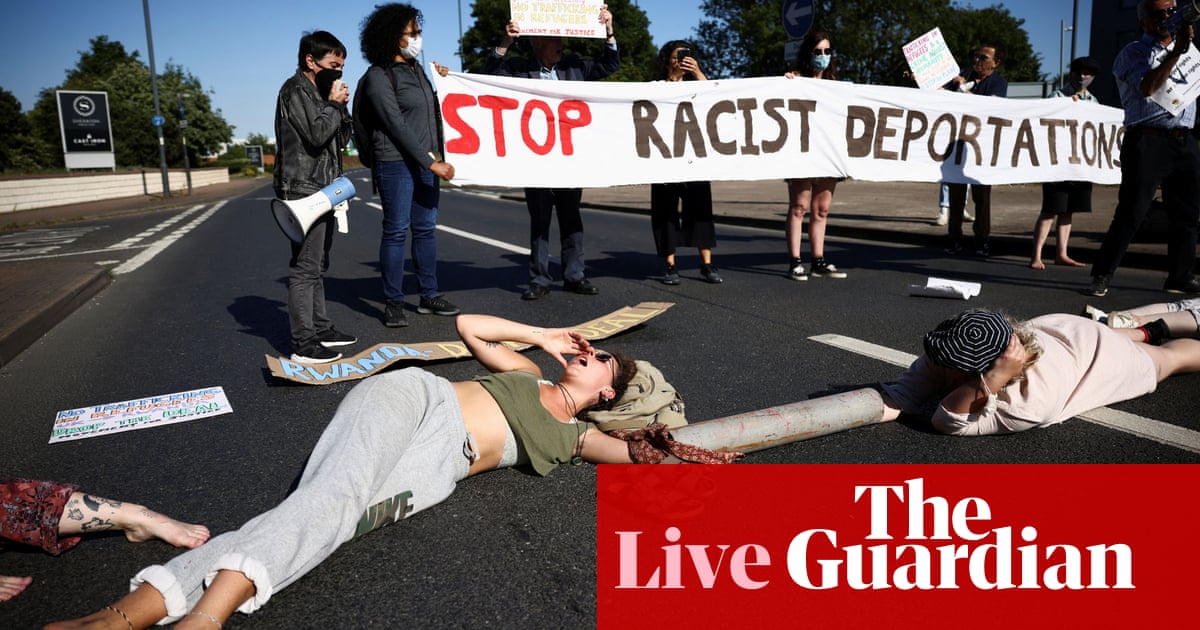 No one will be deported to Rwanda from the UK tonight after the European Court of Human Rights issued last minute injunctions to stop the move, government sources have confirmed to the PA news agency.

The ECHR issued a series of last minute injunctions as the plane was about to take off from Wiltshire.

A total of seven individuals were believed to have been due to board the flight before the successful interventions were made.

Yvette Cooper, the shadow home secretary, said the government must take responsibility for the failed flight and indicated that the government does not mind clashing with lawyers and the European courts.

“Tonight is a night for the history books and the European Court of Human Rights, which was founded in the aftermath of the Holocaust, has done what it was established to do.

“It rarely intervenes in the legal matters of member countries. That it has done so now shows how potentially dangerous the Government’s Rwanda removals policy is.

“The ECHR has recognised that no-one should be forced on a plane until our substantial legal challenge against this policy is heard by the High Court next month.”

Meanwhile, Rwandan government spokeswoman Yolande Makolo said: “We are not deterred by these developments.

“Rwanda remains fully committed to making this partnership work. The current situation of people making dangerous journeys cannot continue as it is causing untold suffering to so many.

“Rwanda stands ready to receive the migrants when they do arrive and offer them safety and opportunity in our country.”

A lawyer representing one of the asylum seekers who was on the cancelled flight to Rwanda has tweeted the following:

Here is the home secretary’s statement in full: “Earlier this year, I signed a world-leading migration partnership with Rwanda to see those arriving dangerously, illegally, or unnecessarily into the UK relocated to build their lives there.

“This will help break the people smugglers’ business model and prevent loss of life, while ensuring protection for the genuinely vulnerable.

“Access to the UK’s asylum system must be based on need, not on the ability to pay people smugglers. The demands on the current system, the cost to the taxpayer, and the flagrant abuses are increasing, and the British public have rightly had enough.

“I have always said this policy will not be easy to deliver and am disappointed that legal challenge and last-minute claims have meant today’s flight was unable to depart.

“It is very surprising that the European Court of Human Rights has intervened despite repeated earlier success in our domestic courts.

“These repeated legal barriers are similar to those we experience with other removals flights and many of those removed from this flight will be placed on the next.

“We will not be deterred from doing the right thing and delivering our plans to control our nation’s borders. Our legal team are reviewing every decision made on this flight and preparation for the next flight begins now.”

Home secretary Priti Patel said she was disappointed the flight to Rwanda was not able to leave but would not be “deterred from doing the right thing”.

She added: “Our legal team are reviewing every decision made on this flight and preparation for the next flight begins now.”

Mark Serwotka, general secretary of the Public and Commercial Services union, said: “We’re pleased the courts have ruled to stop this flight.

“It’s time for the government to stop this inhumane policy which is the basest of gesture politics and start to engage seriously with sorting out the asylum system so those who come to our country seeking refuge are treated fairly and according to the law.”

Refugee Council chief executive Enver Solomon said: “Whilst we are relieved to hear the flight to Rwanda did not take off as planned tonight it is clear that the Government remain determined to press on with this deal, leaving us to continue to witness the human suffering, distress, and chaos the threat of removal will cause with far reaching consequences for desperate people who are simply in need of safety.

The fact that the final flight could not take off is indicative of the inhumanity of the plan and the Government’s complete refusal to see the face behind the case.

“Those threatened with removal are people who have escaped war, persecution, torture, and violence – many of whom have only been prevented from flying due to individual legal interventions declaring it a clear breach of their human rights to do so.

“The Refugee Council has also had to directly intervene to stop young people being removed to Rwanda because they were falsely assessed as adults.

“Government claims that this deal would act as a deterrent to end the model of people-traffickers, have already been disproven with the numbers of people travelling across the channel almost doubling on the same time last year.”

Demonstrators at the front gate of MoD Boscombe Down in Wiltshire have vowed to stay put until they know that all the asylum seekers are off the plane.

One of the protestors, Hope, 25, an administrator from Wiltshire, said: “We’re all thrilled to hear they are being pulled off the flight. It was pretty emotional – there were some tears. We’re still apprehensive about what happens next and we’re not going anywhere until they’re all out of the base.”

The asylum seekers were brought in over a period of about four hours in vans with police outriders and police vehicles.

There are still large numbers of police officers guarding the base keeping an eye on the protestors.

Sadiq Khan, the mayor of London and former Labour MP, has tweeted his reaction:

PA understands that the appeals were considered by an out of hours judge on papers, overruling the UK rulings.

It is believed that at the present time there is not a route for the Home Office to appeal against the decision.

No one will be deported to Rwanda from the UK tonight after the European Court of Human Rights issued last minute injunctions to stop the move, government sources have confirmed to the PA news agency.

The ECHR issued a series of last minute injunctions as the plane was about to take off from Wiltshire.

A total of seven individuals were believed to have been due to board the flight before the successful interventions were made.