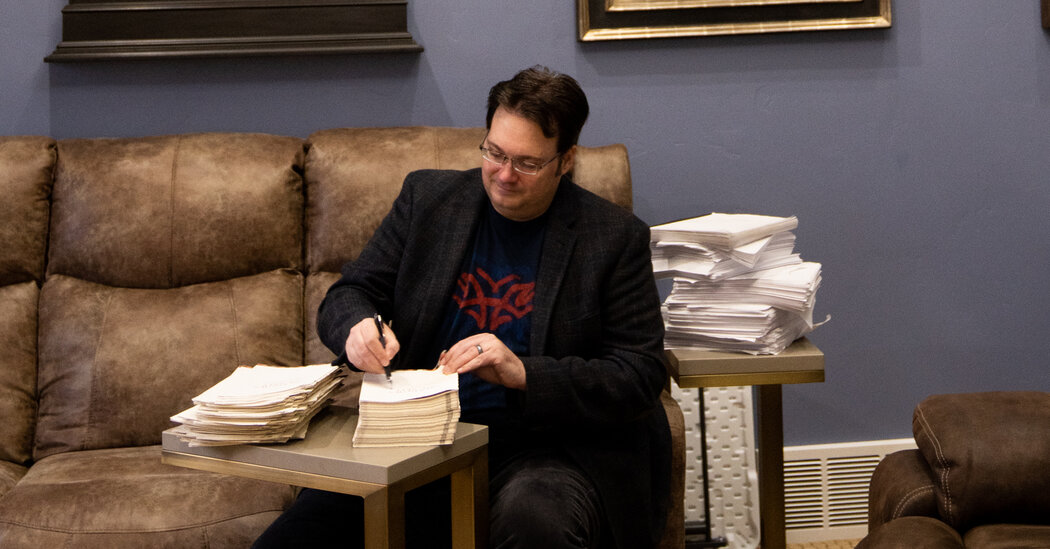 Brandon Sanderson set out to raise $1 million on Kickstarter in 30 days to fund four new books. He blew past it in about 35 minutes.

Brandon Sanderson, a prolific sci-fi and fantasy author, started an online fund-raising campaign this week to self-publish four of the novels he wrote during the pandemic. His goal: to raise $1 million in 30 days.

He blew past the first million in about 35 minutes. And the ticker kept rising.

In 24 hours, he raised $15.4 million, which the fund-raising website Kickstarter said was the single most successful day of any of their campaigns. By Thursday, two days into it, he had raised more than $19 million.

The eye-popping sum raises questions about what is possible for authors with major platforms who are willing to self-publish — and why the vast majority of big names stick with traditional routes to publication. But analysts, and even Sanderson himself, don’t see this kind of self-publishing as a problem for the industry or a desirable choice for most writers. Rather, for the right author, the two paths can coexist and help expand options for readers.

“Publishers need authors to be entrepreneurs these days,” said Kristen McLean, the executive director of business development at NPD Books, which tracks book sales. “This is just going to build his profile and continue to drive the backlist sales of all of his books.”

Part of why this project has worked for Sanderson, McLean said, is his unique relationship with his fans. He has sold 20 million print, audio and e-books, Sanderson said, including titles such as “Rhythm of War,” an epic fantasy novel about a coalition of humans resisting an enemy invasion. Like many authors of science fiction and fantasy, he has spent a lot of time in conventions and interacting with his audience. In 2019, he said, he was on the road for 111 days.

But self-publishing on the scale Sanderson is proposing is an enormously complicated proposition. Fundamentally, most authors want to write books, not run a publishing house.

Books require editors, designers and lawyers. Someone has to register the ISBN number and file for copyright. Someone else has to proofread the manuscript, then proofread it again. Printing thousands of copies of physical books, then storing and distributing them, is expensive and onerous.

To that end, Sanderson has built a company, Dragonsteel Entertainment, which employs 30 people including a marketing director, concept artist, continuity editor and human resources director. He also has a warehouse in Pleasant Grove, Utah, a short drive from his house.

Sanderson has been self-publishing e-books since the early 2010s, he said, and a 2020 Kickstarter campaign to fund a leather-bound reprint of one of his books served as a test run for this larger project.

“I am an artist who was raised by an accountant and a businessman,” Sanderson said in a phone interview from his office in American Fork, Utah. “For a lot of authors, this would be a bad idea because there’s a lot of management.”

Sanderson emphasized that he was not leaving traditional publishers, in part because he wants to be sure that bookstores can continue to have his work in stock. He is published by Tor, which is part of Macmillan Publishers, and Delacorte Press, an imprint of Penguin Random House, and he has a book scheduled for publication later this year with each of them.

He also has no plans to use his company to publish other authors, he said. What makes him successful is his ability to appeal directly to his own fans, who may not necessarily want to buy work by somebody else.

One of his goals for this project, Sanderson said, was to experiment. First, he wanted to see what it might look like to poke a little hole in Amazon’s dominance. Amazon sells more than half the printed books in the United States, but it is even more powerful in e-books and audiobooks, which account for 80 percent of Sanderson’s sales, he said.

“If Amazon’s grip on the industry is weakened, that’s good for the publishers — they are very much under Amazon’s thumb right now,” Sanderson said. “I don’t want to present this as ‘Brandon versus Amazon.’ Amazon’s great. But I think that in the long run, Amazon being a monopoly is actually bad for Amazon. If they don’t have competition, they will stop innovating.”

He also wanted to play around with bundling and upselling. Traditional publishers, he said, offer few products and few options. The array of packages on Kickstarter range from $40 for four e-books to $500 for the four books in all formats, plus eight boxes of “swag.”

“What I can do with the Kickstarter,” he said, “is I can say, ‘hey, if you really want to have more, we will give you more.’”

Other high-profile writers occasionally self-publish. Donald Trump Jr. took that route with his second book, “Liberal Privilege,” after releasing his first book, “Triggered,” with an imprint of Hachette. Colleen Hoover, a novelist who has three books on the New York Times best-seller list this week, continued to self-publish long after she became a hit maker. And there are certain genres, like romance, science fiction or fantasy, where self-publishing e-books remains common for signed authors.

“There’s a lot of hybrid publishing out there that is just happening quietly in the background,” McLean said. “It’s just the way sophisticated authors in genres manage their business.”

Some subgenres are so niche that it may not make sense to release them in the mass market, McLean added. “If you’re known for a romance series between a guy and a robot on some planet, that’s so specific that it might just be something you publish to your fans.”

Sanderson’s intention, he said, was exactly that: to create more options, for readers and for writer.

“My goal in all of this,” Sanderson said, “is to see what’s possible.”