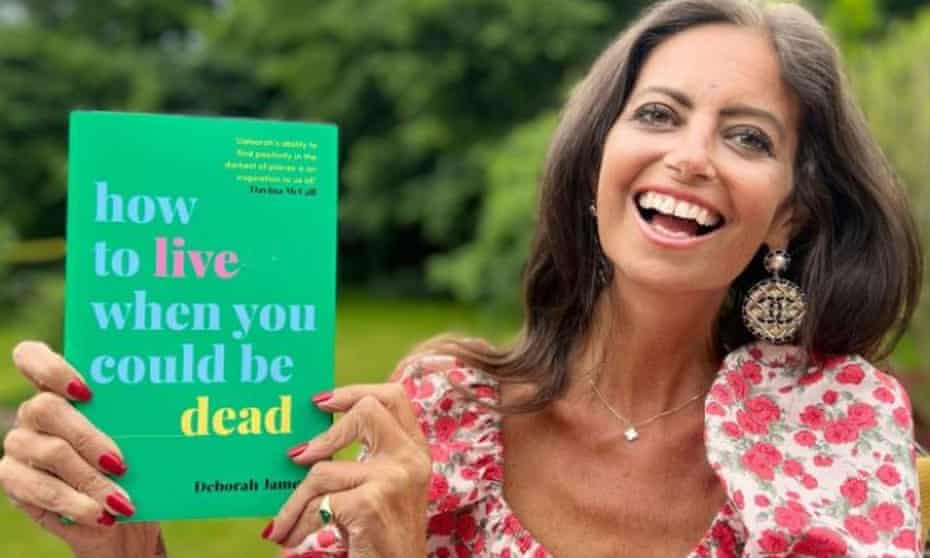 Pre-orders of Deborah James’s second book have soared within days of it becoming available. The podcast host’s memoir-cum-self-help volume is topping the Amazon UK bestsellers list, ahead of Richard Osman’s popular crime novel The Man Who Died Twice.

The publication of How to Live When You Could Be Dead was brought forward this week, after the news that the author hasn’t long to live. It will now come out in August, rather than January next year, as first planned.

James, who is 40, was diagnosed with stage four bowel cancer in 2016, and was told by doctors that she had a less than 8% chance of surviving the next five years. Since then, the former secondary school deputy headteacher has hosted BBC Radio 5 live’s You, Me and the Big C podcast about cancer, and has raised more than £5.7m for Cancer Research UK through her Bowelbabe fund on JustGiving.

Last week she was made a dame for her campaign work, and presented with the honour by the Duke of Cambridge at her parents’ home. This came just days after she revealed that she had moved into hospice care with her family.

“Every now and then, someone captures the heart of the nation with their zest for life and tenacious desire to give back to society,” the Duke and Duchess of Cambridge said in a statement, which named James as “one of those special people”. They praised her “tireless efforts to raise awareness of bowel cancer and end the stigma of treatment”.

James’s husband, Sebastien Bowen, arranged for her to visit RHS Garden Wisley in Surrey to celebrate the launch of How to Live When You Could Be Dead, which she described on Instagram as a “bit of a mission but worth it!” She explained that she hadn’t been able to leave the house in 10 days because of her health, and while, after the visit, she planned to “snooze for most of the day”, she loved being reminded “of vibrant green life all around, despite the sadness of knowing the state of my body inside”.

She added that she was “blown away and utterly grateful” to those who have pre-ordered the title.

While James’s first book, F*** You Cancer, acted as a kind of “cancer coach”, helping readers to navigate a cancer diagnosis, How to Live When You Could Be Dead promotes the growth mindset theory, in which James is a passionate believer. Drawing on her own experience of living longer than doctors expected, James explores the benefits of living “in the now” and learning “to value one day at a time”.

Announcing the change of publication date on Instagram, James described the book as a way to share what she has learned about “how to have a positive mindset when we are faced with life’s biggest challenges”.

The new publication date will still be, she said, long after she’s “flying high” but “hopefully a little less longer for you to wait”.

For every copy sold in the UK, £3 will go to the Bowelbabe Fund.