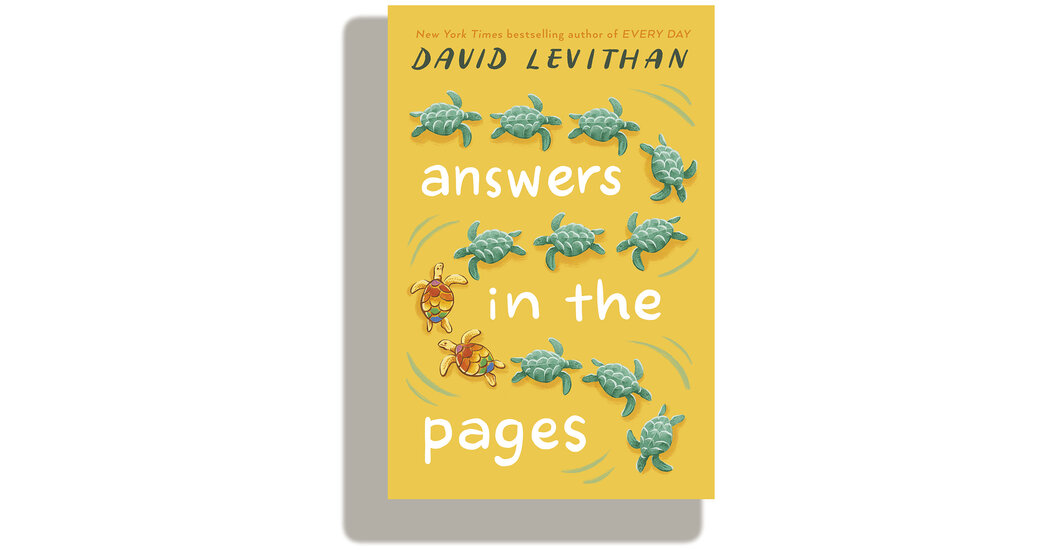 ANSWERS IN THE PAGES
By David Levithan

When a child comes to you with big questions about the world, it’s beautiful to be able to say, “Here’s a book that will help us understand.” “Answers in the Pages,” by David Levithan, is such a book for children grappling with why books get challenged and what they can do about it.

The novel comprises three intertwined narrative threads: The main story is relayed in first person by Donovan, a fifth grader whose mother has sparked a campaign to challenge a book he’s been assigned in English class: an action-adventure novel with possibly gay protagonists. The second thread gives us a glimpse of “The Adventurers,” the delightfully cheesy invented novel to which Donovan’s mother objects. The final thread, narrated in third person, is a sweet story of first love between two boys (at the same school a generation earlier); its connection to the main story is a bit of a mystery until the end.

“Answers in the Pages” will empower young readers, since Donovan and his classmates band together to speak up in support of their teacher, of the book and of their right to read it. They get to be part of the solution, injecting themselves into a conversation that some of the adults in their lives would prefer to keep from them.

Donovan is at first confused about the issue, then torn between supporting the book and supporting his family. There’s no ambiguity in his pro-book stance, but it’s hard to speak out against one’s parents. Ultimately for Donovan, doing so is a big part of effecting change.

The novel’s resolution is tidy in a way that real-world endings rarely are, but it provides a good introduction for its targeted age group to the topic of censorship.

Levithan walks a fine line here. The characters in his novel who oppose “The Adventurers” don’t expressmany overtly homophobic ideas; Donovan’s mother says the book is “inappropriate” but never explains to him why she thinks so. While this feels true to life — parents who are trying to prevent their children from learning about homosexuality in school aren’t likely to explain it to them at home in the process — it weakens the narrative’s core tension.

Donovan gleans his parents’ homophobia from classmates whose parents are less afraid of identity conversations, which strikes an authentic tone. Kids are going to learn all the complex truths of the world one way or another.

Despite its title, readers will likely finish “Answers in the Pages” with big questions and bigger feelings, which is the best possible outcome. It’s an accessible, engaging look at the insidious and troubling practice of challenging books that reflect diversity. And it’s likely to promote much-needed conversations between caregivers and children. My hope is that it finds its way to school library shelves and stays there (except of course when it’s checked out by a young reader).

To challenge a book about what it means to challenge a book would take this conversation to a surreal level. Yet Levithan’s novel is itself everything Donovan’s mother and people like her object to: a celebration of quiet queerness, of self-discovery, of allyship, of the way books can open our world and spark adventures both real and imagined, of the fact that, whether we love our same-gender friends as friends or more than friends, we deserve to have our stories told and read and shared.