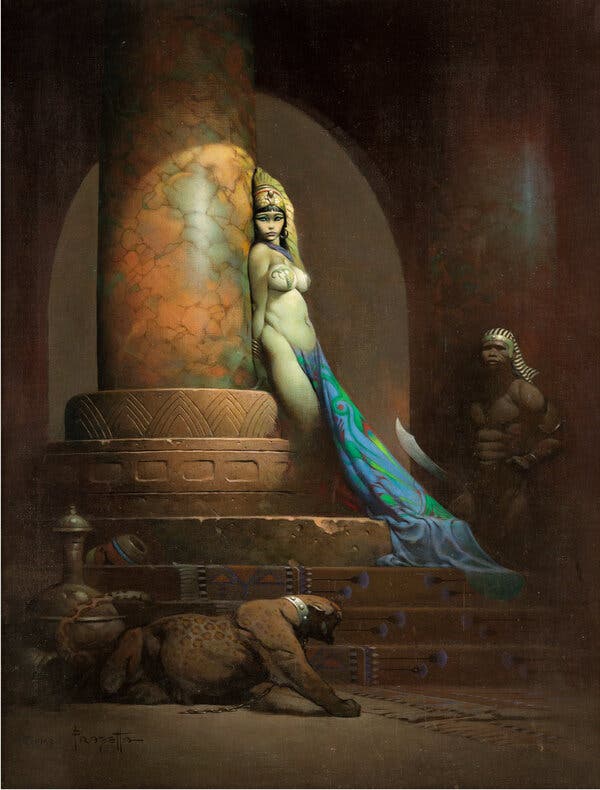 Going, going, gone: The original art for a Batman cover sold for $2.4 million at an online auction and joins a select group of high-priced comic book or fantasy artworks.

Holy original art, Batman! The cover of the first issue of Batman: The Dark Knight Returns was sold by Heritage Auctions for $2.4 million on Thursday, making it the latest example of a piece of comic book or fantasy art to sell for over $1 million at auction.

Here’s a look at some of these high-priced, one-of-a-kind collectibles.

The career of the illustrator Frank Frazetta, who died in 2010, began in comic books before he found fame in painting covers for fantasy novels, which often featured alluring women and brawny men. Those two archetypes are evident in four of his paintings that sold for over $1 million. At the top of the list is his 1969 “Egyptian Queen” painting, which was used as the cover of Eerie magazine No. 23. It was sold by Heritage Auctions for $5.4 million in 2019. The previous year, “Death Dealer 6” (1990), one in a series of his paintings featuring a mysterious warrior in a horned helmet, was sold by Heritage for $1.7 million. In 2020, his “A Princess of Mars” painting from 1970 was sold online by Heritage for $1.2 million. And Frazetta’s “At the Earth’s Core” (1974), which was used as the cover for Edgar Rice Burroughs’s novel by the same name, was sold by Heritage for over $1 million in 2016.

A painting of Tintin, the young reporter created by the Belgian cartoonist Georges Remi (better known as Hergé), was sold by Artcurial in Paris for €3.1 million ($3.9 million) last year. The art shows Tintin and his dog Snowy peeking out from a porcelain jar while a dragon hovers dangerously close. It was intended for the cover of the 1936 “The Blue Lotus,” but it was deemed too expensive to reproduce. Tintin made his debut in 1929, in a young readers’ supplement of the Belgian newspaper Le Vingtième Siècle. Neither Tintin nor his creator escaped controversy. A 2009 article in The Times by Charles McGrath traced Hergé’s trajectory through accusations of anti-Communism, antisemitism, colonialism, racism and Nazi collaboration. Even how to say Tintin’s name is debatable. A Times article about the 2011 animated film “The Adventures of Tintin” suggested pronouncing it the French way: “Tanh-tanh,” and not as a rhyme of “win win.”) In 2019, Heritage Auctions sold a Tintin illustration for $1.1 million.

“Well, I’ll be an eight-ball’s uncle!” says Spider-Man as he dons his new, sleek black costume in the last page of 1984’s Marvel Super-Heroes Secret Wars No. 8, which was penciled by Mike Zeck. There were similar incredulous reactions in January when the original art was sold online by Heritage Auctions for $3.3 million. That artwork has come a long way. “In the ’80s, those pages could go for an average of 15 bucks a page,” said Zeck in a telephone interview. Though Secret Wars did not reflect his best work — he recalled the series running behind schedule and the art having to be rushed — that has not affected the nostalgia for it. “The 12-year-olds who read Secret Wars, 20 to 30 years later, they all have good jobs,” he said, and they seem willing to pay for art and copies of the comic. “That’s the No. 1 book that I sign.”

Batman: The Dark Knight Returns, a four-part story written and drawn by Frank Miller, inked by Klaus Janson and colored by Lynn Varley, was originally published in 1986 and helped usher in a new level of mature storytelling to comic books. The story depicted an older Bruce Wayne who comes out of retirement to protect Gotham City from a new breed of criminal. The cover, by Miller and Varley, shows Batman in silhouette as a lightning bolt bursts from the sky. During a recent telephone interview, Miller expressed his hopes for the sale of the work. “I hope it sells for a whole lot of money because that’ll be good for everyone down the road,” he said. “Roy Lichtenstein made all those gazillions of dollars basically tracing off old romance comics. It would be nice for the real item to go out there and be recognized.” On Thursday, it sold online at Heritage Auctions’ Comics and Comic Art sale for $2.4 million.

The artist Bernie Wrightson spent seven years working on his black-and-white adaptation of “Frankenstein,” which was published by Marvel in 1983. In this double-page spread, which was sold online by Heritage Auctions for $1.2 million in 2019, the monster confronts his maker. There is so much detail in the countless beakers, books and other paraphernalia in the mad scientist laboratory that it is not hard to see why the project took nearly a decade to complete. Wrightson died in 2017 and his wife, Liz Wrightson, said that he thought his Frankenstein work was his magnum opus.