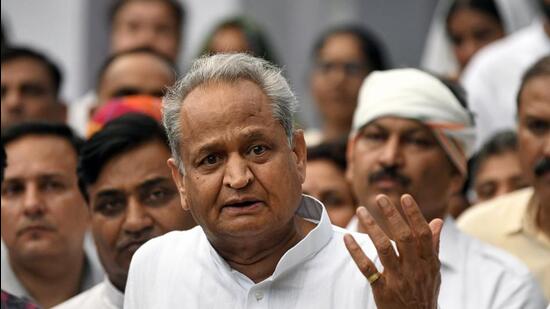 The probe agency also conducted raids across 15 locations in Gujarat, West Bengal and Rajasthan, including Agrasain’s residence in Mandore in Jodhpur, on Friday on the basis of a first information report (FIR) filed against 15 people earlier this week, the officials said.

The Central Bureau of Investigation (CBI) has registered a corruption case against Rajasthan chief minister Ashok Gehlot’s brother, Agrasain Gehlot, and 14 others for alleged diversion of subsidised fertilisers meant for farmers between 2007 and 2009 and causing a purported loss of ₹52.8 crore to government exchequer, officials said on Friday.

The probe agency also conducted raids across 15 locations in Gujarat, West Bengal and Rajasthan, including Agrasain’s residence in Mandore in Jodhpur, on Friday on the basis of a first information report (FIR) filed against 15 people earlier this week, the officials said.

Chief minister Gehlot termed the raids as an “act of revenge” by the Centre for his involvement in the Congress’s protests against questioning of party leader Rahul Gandhi by the Enforcement Directorate (ED) in the National Herald Case.

The CBI’s action against Agrasain came almost two years after the ED, in July 2020, raided his premises in the matter. It was around this time that the ruling Congress in the state was reeling under a political crisis as party leader Sachin Pilot had rebelled against the Ashok Gehlot-led government.

The case against the chief minister’s brother and 14 others relates to the export of muriate of potash (MOP), also known as potassium chloride, used by farmers. MOP is a restricted item and can be exported only with permission of the government of India.

In its FIR on June 15, a copy of which HT has seen, the CBI said it had registered a preliminary enquiry (PE) – a precursor to the FIR – in the matter in June 2021. The enquiry revealed that MOP was exported in the guise of Feldspar powder/industrialist salt to overseas buyers between 2007 and 2009, it said.

Of a dozen individuals and their companies which were involved in the alleged irregularities, one of the firms is Anupam Krishi owned by Agrasain Gehlot, the FIR added.

“To cover up the transaction, fictitious purchases of Feldspar powder/industrial salt through dealers in Rajasthan and Kolkata were shown,” the CBI said.

The accused had allegedly hatched a conspiracy with unknown officials of Central Board of Excise and Customs and company M/s Indian Potash Limited, which supplies MOP to farmers through its authorised dealers at subsidised rates, among others, the CBI said in a statement.

As part of the conspiracy, the accused purchased and exported a total of 24,003 MT of MOP in the guise of industrial salt/feldspar powder, causing a loss of subsidy of ₹52.8 crore (approximately) to the government of India, it added.

The CBI’s probe is based on an investigation carried out by the customs department and the Directorate of Revenue Intelligence in 2009.

In its investigation report, reviewed by HT, the customs department said Agrasain Gehlot’s company allegedly played a key role in the irregularities. It is suspected that the MOP was exported to companies in Malaysia and Singapore, the department said.

Agrasain Gehlot “knowingly opted to become part of the syndicate in the entire chain of conspiracy by facilitating the said consortium (of private companies) by supplying subsidized MOP, which was meant for sale to farmers only and forged documents for which he admittedly gained certain amount as his commission”, it said.

Hitting out at the Centre, Ashok Gehlot said the Union government is avenging his involvement in the movement for Rahul Gandhi in Delhi on his brother.

“If I am active in Delhi or have participated in this movement for Rahul Gandhi, then why revenge is taken from my brother? When there was a political crisis here in our government in 2020, at that time also the ED had raided my brother’s place,” the chief minister told reporters at Jaipur airport.

“It’s not fair. We are not going to panic because of this,” he added.

Ashok Gehlot said he had recently sought an appointment with the directors of CBI and the ED, and the chairman of the Income Tax Department. “On June 13, time was sought, on 15 the case was registered, and on June 17 there were raids. What is this approach, it is beyond comprehension?” he said.

Congress general secretary and chief spokesperson Jairam Ramesh said the Centre will not be able to silence the party leaders.

“This is vendetta politics beyond all bounds. Ashok Gehlot was at the forefront of the protests in Delhi over the past three days, and this (Narendra) Modi government’s brazen response! We will not be silenced,” he tweeted.

The ED had questioned Agrasain several times in September and October last year.