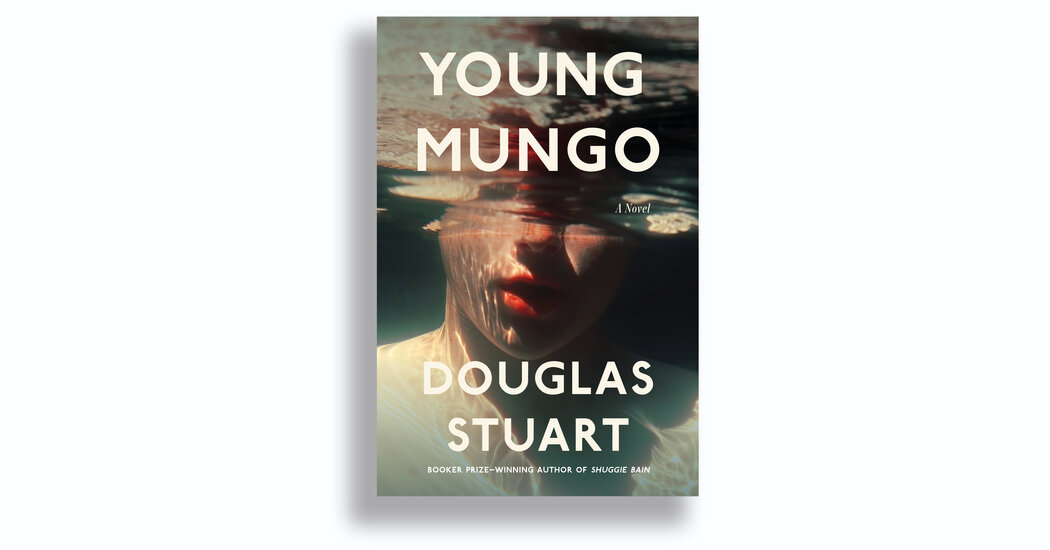 Douglas Stuart’s follow-up to his Booker Prize-winning novel “Shuggie Bain” is, like that novel, the story of a boy and his alcoholic mother in working-class Glasgow.

A critic could generate a whole book review simply by reproducing her marginalia. It would be boring to read but accurate, like an EKG printout. If the book in question were “Young Mungo,” by Douglas Stuart, it might begin with observations like “Gorgeous writing!” and “Wow,” before graduating to expletives and exclamation marks and wobbly underlines and question marks. Family-friendly adjectives do not always describe the yanking of certain heart strings in this lovely but occasionally overworked novel.

“Young Mungo” is a cousin to Stuart’s debut, “Shuggie Bain,” which was awarded the Booker Prize in 2020 and was a finalist for the National Book Award. As with that novel, this one tells the story of a boy and his alcoholic mother in working-class Glasgow. The novels share a brutality and a squirmy, claustrophobic evocation of family life. And they offer a world of exquisite detail: If a perfume creator wished to bottle the olfactory landscape of post-Thatcher-era Glasgow, all the necessary ingredients could be found in Stuart’s descriptions of sausage grease, fruity fortified wine, pigeon droppings and store-bought hair bleach.

Mungo is 15 years old and the youngest of three children. His mother, Maureen, also known as Mo-Maw, is a boozy wreck given to frequent disappearances. This is not the sort of woman who, when she vanishes, is presumed to be on an “Eat, Pray, Love”-style voyage of self-discovery. This is the sort of woman whose children immediately fear her to be not only dead but gruesomely and specifically dead: gutted with a steak knife and dumped naked in a river.

We first encounter Mungo as he is taken from his house by two strange men for a weekend of camping and fishing. The full, dark purpose of the trip is unclear, and the fact that it has been sanctioned by Maureen — who waves her son away with pink-painted fingernails from the window of the family’s tenement flat — is ominous.

The grisly events of that trip are interspersed with chapters about James, an older boy from the neighborhood whom Mungo meets on an empty lot beside a motorway, where the elder has built a “doocot” structure for keeping pigeons. James’s touch, unlike that of other local boys, doesn’t cause Mungo to flinch in defense. The two fall in love, and how could they not? James is resourceful and looks “like an oil painting”; Mungo is undefended and graceful, with skin “so creamy that you wanted to take a spoon to him.” With James, Mungo discovers a love not rooted in subjugation.

But homophobia is a noxious fog. Both boys are told, amply and colorfully, to man up. The terms of manhood in this biome are to possess an outrageously high pain threshold and the capacity to inflict torture. A boy might be considered a man if, for example, he can fall off a piece of construction equipment at a great height, shatter his arm, urinate on himself from the pain and yet avoid wailing like a baby. He may be a man if he is able to smash a brick over a cop’s head, stab a night watchman, slash faces and shatter teeth.

The question, then, is whether love can survive this unimaginably hostile environment. Just when you think the soil is too acidic for these tender sprouts to flourish, Mungo and James find new reserves of durability. Being sensitive to the world means being pummeled by it, but it also allows one to adapt.

When Stuart errs, it’s on the side of excess. Many passages might have profited from being left as subtext. In these, it is as though Stuart has allowed the CliffsNotes version of “Young Mungo” to barge directly into the novel. We understand how Mungo feels when someone undermines his humanity with a snarky comment; we don’t need the exposition of: “Here was yet another person telling him what he needed, how he should act, the person he should be. Another person who didn’t think he was enough just as he was.”

This happens with increasing frequency, and it presents a riddle: When an author repeatedly insists on telling what he has already shown, is it because he doesn’t trust the reader’s attentiveness or because he questions his own effectiveness? Is it condescension or self-doubt?

Here, as he did in “Shuggie Bain,” Stuart mixes the self-aware floridity and emotional Technicolor of a Douglas Sirk melodrama with the ambient violence of Elena Ferrante’s Neapolitan novels. As Mungo undergoes one atrocity after the next — beatings, sexual assault, abuse and exploitation of every form — the specificity of each episode risks blurring into an aesthetic of generalized wretchedness.

Some readers will feel themselves thrust into the role of a misery tourist. Others will respond the way the director Rainer Werner Fassbinder responded to Sirk’s films, dazzled into inarticulate reverence. “A great, crazy movie about life and about death,” is how Fassbinder described Sirk’s “Imitation of Life.”

There is crazy greatness in “Young Mungo,” along with corny lapses and moments with the expository flatness of a TV voice-over. Still, faulting a novel of this register for intemperance feels like faulting an opera for being “too loud.” The volume is part of the point. Sometimes you wince. Often you exult.