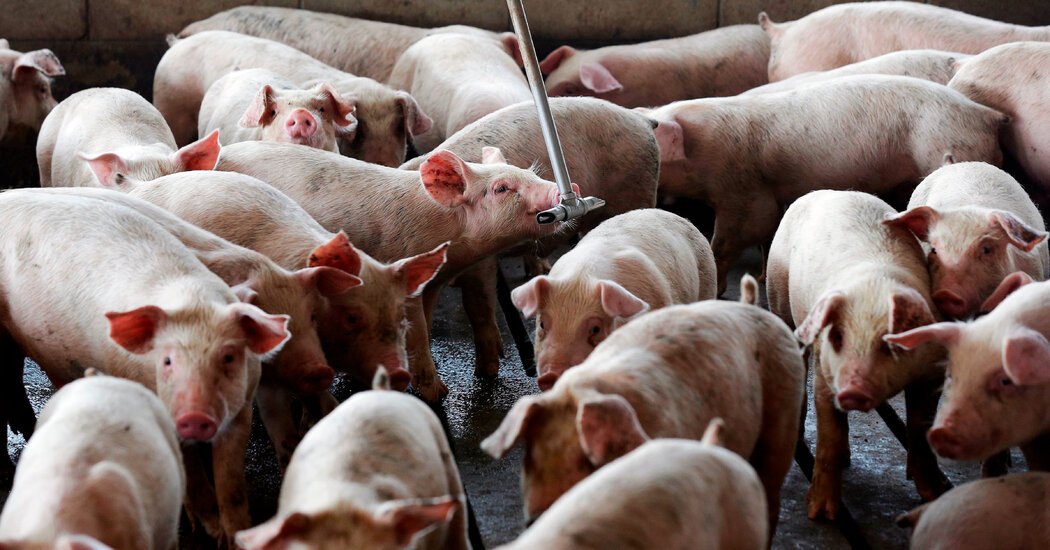 In “Wastelands,” Corban Addison tells the extraordinary story of how some North Carolina residents stood up to a meatpacking company polluting their communities.

WASTELANDS: The True Story of Farm Country on Trial, by Corban Addison

Human beings have been raising pigs for about 10,000 years. But the methods used to breed, raise, process and market them have been profoundly transformed during the last few decades. In the United States, until recently, hogs were raised on small farms, fed leftover grain, allowed to run freely in pens and barns and sold at live auctions with competitive bidding. The typical herd ranged in size from the dozens to the low hundreds. During the 1980s, cheap, federally subsidized grain, an absence of antitrust enforcement, the rise of huge meatpacking companies, and new production techniques devised by those companies turned hogs into industrial commodities — and drove 80 to 90 percent of American hog farmers out of the business.

The places where hogs are now raised are “farms” in name only. They’re essentially livestock factories, dedicated to uniformity and efficiency, that house thousands of hogs crammed together in windowless sheds. And like other factories, they produce a good deal of waste — in this case, about a gallon and a half of urine and excrement per hog every day. All of that waste has to go somewhere. And where it winds up has proved remarkably destructive to America’s rural landscape and the people who live in it.

“Wastelands,” by Corban Addison, tells the extraordinary story of how some neighbors of hog operations in North Carolina battled a meatpacking company polluting their neighborhoods. They sued the company in federal court, launching cases that took years to resolve, with surprising twists and serious implications not only for the future of American agriculture but also for the health of our democracy. Addison, an attorney and best-selling novelist, is the ideal writer to tell this story — and North Carolina is in many ways the perfect setting from which to explore the real-life impact of concentrated animal feeding operations, abbreviated CAFOs, an official term for modern-day livestock factories. In the early 1970s, North Carolina had about 18,000 hog farms, with an average herd of about 75 hogs. Today, it has only 2,000 hog operations, with herds as large as 60,000 hogs. The state’s nine million hogs annually produce from three to 10 times as much waste as New York City does. But that hog waste isn’t sent to high-tech treatment plants. It is pumped into large pools, euphemistically called “lagoons.” Just one of those pools can hold enough waste to cover 15 football fields with crap a foot deep. And when lagoons are full, the untreated waste is sprayed onto nearby fields. Addison describes how giant spray guns shoot 200 gallons of waste per minute into the air, noxious stuff with “a strange muddy-pink color to it” that tends to “drift like a cloud on the breeze.”

The North Carolina hog boom occurred mainly in the coastal plain east of Interstate 95, Addison notes, “a rural region of the state invisible to outsiders and forgotten by most North Carolinians.” From the 1980s through the early 2000s, former tobacco farmers were encouraged to raise hogs under contract to the meatpackers. In one county, the hogs soon outnumbered the humans by a factor of 35 to one. The new hog factories were built without restrictions from local zoning laws, sometimes right next to homes inhabited for generations — mainly by families who were poor and Black. The quality of life in those homes deteriorated greatly. Tractor-trailers carrying hogs drove past day and night. The high mortality rate in the sheds and the dead hogs left outdoors awaiting removal attracted flocks of vultures. The vast pools of waste emitted a terrible, overpowering smell. And the waste sprayed on fields often fell on the roofs of nearby houses, Addison writes, with “the soft pitter-patter of rain.” DNA tests revealed traces of hog excrement inside kitchens, on the surfaces of refrigerators, on top of stoves. It was a textbook case of environmental racism. After years of complaints to local and state authorities went unheeded, more than 500 neighbors of North Carolina CAFOs, almost all of them Black, filed lawsuits against the meatpacking company that seemed the worst offender: Smithfield Foods.

In a David-versus-Goliath tale like this one, you could hardly hope for a more ruthless and intimidating giant than Smithfield. The company is not only the world’s largest producer of pork but also the owner of the world’s largest slaughterhouse. Located in Tar Heel, N.C., that slaughterhouse disassembles about 32,000 hogs a day. For years, the workers at the Tar Heel plant were treated almost as poorly as the hogs: Smithfield harassed union supporters, paid workers to spy on fellow workers and employed deputy sheriffs as corporate security officers who beat and arrested workers. The company originated in Smithfield, Va., during the 1930s and later became a corporate dynasty, successively led by Joseph W. Luter Sr., Joseph W. Luter Jr. and Joseph W. Luter III. It grew by pioneering industrial methods of hog production and by taking over its competitors, one by one. But when the North Carolina lawsuits were filed in 2013, Smithfield Foods was no longer an American company. Shuanghui International Holdings, a Chinese corporation now known as WH Group, had bought it the previous year, with financing from the government-owned Bank of China. The cost of raising hogs in North Carolina was about half as expensive as raising them in China — and one of the reasons, Addison explains, is that “the Chinese government doesn’t allow its hog farmers to use lagoons and spray fields.” Instead, Chinese hog operations must invest in “treatment facilities” and “biological odor control systems to protect neighbors.”

“Wastelands” is full of memorable people. An assortment of high-powered attorneys agrees to take on Smithfield, working free in return for a share of any settlement. They fly on private jets, employ focus groups, hire a videographer from National Geographic to convey the neighbors’ plight. Mona Lisa Wallace is the most sympathetic and compelling member of the legal team, brilliant, indefatigable, raised in small-town North Carolina with a working-class background, dedicated to using the courts to help victims of corporate misbehavior. Among the plaintiffs, Elsie Herring — one of 15 children, who left North Carolina for New York City and returned almost 30 years later only to find herself drenched in a misty rain of manure on a walk near her family home — stands out. As does Violet Branch, one of 11 children, who has lived for more than 70 years in the house where she was born but must endure the pollution from two waste lagoons next door. Before the lawsuit, Branch had tirelessly contacted public health officials, journalists, even the Environmental Protection Agency in Washington, seeking relief from the stench. “Nothing is going to be done about this issue — nothing has been done,” she bravely testifies in court, “because the power structure in those communities is not going to allow something to be done about it.”

Smithfield unabashedly uses its power to avoid responsibility for the legal “nuisance” at issue in court. It threatens to leave the state if the lawsuits are successful. It spies on the attorneys and hires private investigators to keep tabs on the plaintiffs. It helps to create a front group, “NC Farm Families.” It works closely with the state farm bureau, chamber of commerce and Republican Party, whose members introduce bills in the legislature to protect Smithfield from liability. The odors from the company’s hog operations, one Republican legislator boasts, are the “smell of freedom.” The legislature’s only significant departure from industry-friendly policies occurred in 1997, when it passed a temporary moratorium on new hog operations — just as two were about to be built in Moore County, home to the Pinehurst resort and its legendary golf courses.

I am neither a vegan nor a vegetarian. But I think the hog factories described in “Wastelands” and the similar CAFOs in other states are forms of systematic animal cruelty. They are crimes against nature. Hogs are intelligent and sensitive creatures capable of multistage reasoning like dolphins and apes, with a social structure similar to that of elephants. Hogs can recognize themselves in a mirror, differentiate one person from another, remember negative experiences. And they like to be clean. Their lives in hog factories scarcely resemble how they’ve been raised for millenniums. They arrive as small piglets, live crammed together amid one another’s filth and leave a few months later for the slaughterhouse — never having enjoyed a moment outdoors during their entire time at the shed. The foulness of these places, for the animals that live in them and the people who live near them, truly defies words.

Corban Addison hasn’t written a polemic about hog factories, like my paragraph above. He has calmly assembled a legal thriller, full of energy and compassion, that addresses issues of real importance, like the works of John Grisham and Scott Turow. Grisham wrote the foreword to this book, and in it, he says: “Beautifully written, impeccably researched, and told with the air of suspense that few writers can handle, ‘Wastelands’ is a story I wish I had written.” I agree with Grisham. But I wish that “Wastelands” were a work of dystopian science fiction, not a damning portrait of how we feed ourselves now.

Eric Schlosser is the author of “Fast Food Nation” and “Command and Control.”