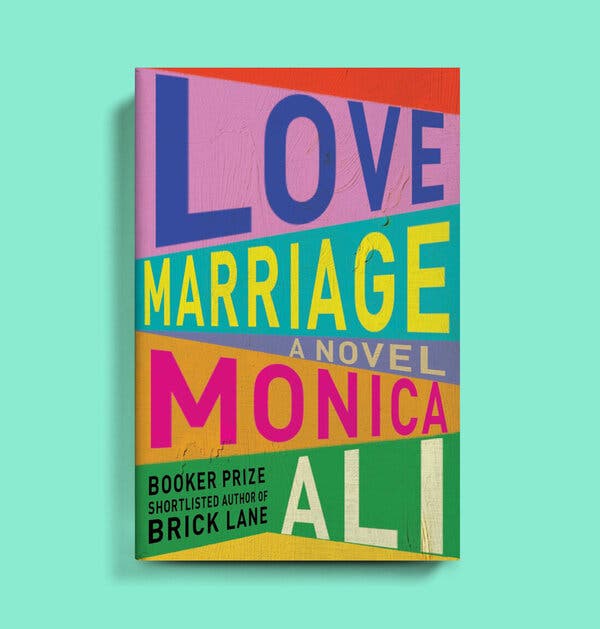 In her new novel, “Love Marriage,” Monica Ali explores the ripple effect of one union on two households with deep secrets.

Welcome to Group Text, a monthly column for readers and book clubs about the novels, memoirs and short-story collections that make you want to talk, ask questions and dwell in another world for a little bit longer. Yasmin and Joe are getting married. Their families meet. Suddenly every problem, secret, injustice and difference of opinion on both sides is blown wide open, with disastrous consequences. Why is dysfunction so enthralling when it isn’t your problem? And this is before we get into religious differences, cultural appropriation, gender roles, sexual proclivities and Brexit.

When my now-husband and I announced that we were getting married, my uncle called to offer congratulations and wisdom. “Remember,” he said, “marriage is a merger of families, not just two people.” At the time, I found this notion appallingly unromantic. I was going for more of a Pablo Neruda vibe (“in which there is no I or you,/so intimate that your hand upon my chest is my hand, so intimate that/when I fall asleep your eyes close”). I understood that corporate-speak might apply to other nuptials, but not to ours, thank you very much.

Two decades and many family meals and holiday negotiations later, I was reminded of my uncle’s prescience while reading Monica Ali’s fifth novel, LOVE MARRIAGE (Scribner, 419 pp., $27.99). This sprawling buffet of a story begins with the meeting of two families whose adult children — both seemingly mature and generally of sound mind — are marrying each other. The highly orchestrated breaking of bread (or, more accurately, ladling of curry) will take place at the posh London home of Harriet Sangster, mother of the groom. In this setting, the betrothed couple, Yasmin and Joe, instantly lose the spotlight to their parents, who are such lively characters, they practically waltz off the page to hand readers save-the-date cards.

But let’s not get ahead of ourselves: We’re talking about a complicated merger. On one side, we have Harriet, an outspoken feminist known for polyamorous pursuits and intimate portraiture (imagine a cross between Erica Jong and Gloria Steinem); Joe’s dad is mostly out of the picture. And on the other, we have Yasmin’s parents: Shaokat, a doctor who is immensely proud of his daughter for following in his footsteps (unlike her layabout brother, Arif); and Anisah, a soap opera enthusiast who places a great deal of focus on the domestic arts. The Ghoramis come from opposite backgrounds — “the well-to-do Calcutta girl and the poor but clever village boy.” According to family lore, kismet brought them together.

The meeting could not be more cringeworthy, with Yasmin hoping that Harriet won’t mention her latest project (a book of interviews with men about their penises, accompanied by “de-eroticized” photos) and Anisah pushing for a more religious ceremony than the couple had in mind. You can cut the awkwardness with a scalpel. But what follows makes Harriet’s condescending reveries about her time in India sound downright tactful.

Ali’s opening salvo is just a prelude to a barrage of secrets, missed connections and infidelities that not only threaten to topple Yasmin and Joe’s alliance but also force them to see the worlds they come from with fresh eyes. I came to care deeply about this flawed pair, whose destiny Ali unfurls with obvious glee and a touch of poetry. (Her debut novel, “Brick Lane,” was a critical darling, but my personal favorite of her books is “Untold Story,” a reimagining of the life of Princess Diana.) New alliances form. Another family takes shape. Professional loyalties shift. I’m tap-dancing around a dozen spoilers here — suffice it to say, there are many subplots (sometimes too many) and an embarrassment of characters (some easier to keep track of than others). But somehow, like a loud wedding where everyone ends up on the dance floor, the chaos is part of the fun.

As for the question of happily ever after, “Love Marriage” may inspire you to prioritize honesty over bliss.

“The Namesake,” by Jhumpa Lahiri. Yasmin’s discomfort with her parents’ refusal to dress and dine like their neighbors in London reminded me of Gogol Ganguli, the iconic protagonist of Lahiri’s “quietly dazzling” (according to our critic) novel about two generations of an Indian family adjusting to life in Boston. Gogol’s mother, Ashima, describes being a foreigner as “a sort of lifelong pregnancy — a perpetual wait, a constant burden, a continuous feeling out of sorts.”

“Seating Arrangements,” by Maggie Shipstead. This “smart and frothy” debut novel takes place during a wedding weekend on a fictional island off the coast of New England — “one where old-money families gather to drink gin and nurture loyalties,” wrote our reviewer. She went on, “In the first five sentences, Shipstead hints at the sexual tension that holds taut the novel’s three-day span, introducing, with a brush stroke, two daughters and a wife with the old-lace name of Biddy — and then, as if inserting a splinter, sliding in the threat of adultery.”