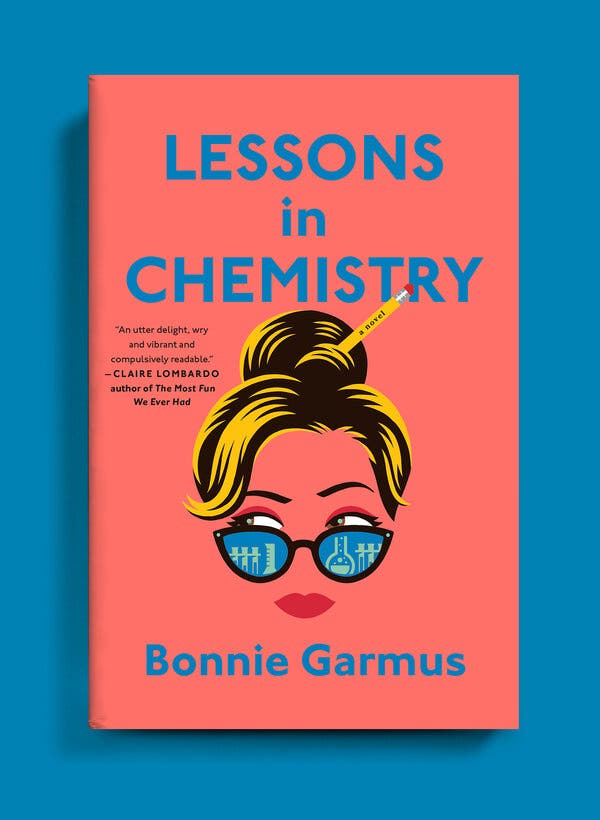 In Bonnie Garmus’s debut novel, “Lessons in Chemistry,” a woman who has been banished to the home front turns it into a staging ground for a revolution.

Welcome to Group Text, a monthly column for readers and book clubs about the novels, memoirs and story collections that make you want to talk, ask questions and dwell in another world for a little bit longer. Meet Elizabeth Zott: scientist by training, cooking show host by default. One meal at a time, she galvanizes her audience to question the lives they’ve been served. Like the lunches Zott packs for her daughter, “Lessons in Chemistry” is irresistible, satisfying and full of fuel. It reminds you that change takes time and always requires heat.

Here are a few words I loathe in conjunction with fiction written by women: Sassy. Feisty. Madcap. These supposedly complimentary adjectives have a way of canceling out the very qualities they’re meant to describe: Opinionated. Funny. Intelligent. This last one is not to be confused with its patronizing cousin, Clever. Don’t even get me started on Gutsy, Spunky and Frisky — the unfortunate spawn of Relatable.

With that out of the way, let’s talk about LESSONS IN CHEMISTRY, by Bonnie Garmus (Doubleday, 386 pp., $29), a debut novel about a scientist in the 1960s who is opinionated, funny and intelligent, full stop. Unfortunately, Elizabeth Zott has been unceremoniously and brutally sidelined by male colleagues who make Don Draper look like a SNAG (Sensitive New Age Guy).

How, exactly, she was cheated out of a doctorate and lost the love of her life — Calvin Evans, a kindred scientist, expert rower and the father of her daughter, Madeline — are central elements in the story, but feminism is the catalyst that makes it fizz like hydrochloric acid on limestone.

Elizabeth Zott does not have “moxie”; she has courage. She is not a “girl boss” or a “lady chemist”; she’s a groundbreaker and an expert in abiogenesis (“the theory that life rose from simplistic, non-life forms,” in case you didn’t know). Not long after Zott converts her kitchen into a lab equipped with beakers, pipettes and a centrifuge, she gets hoodwinked into hosting a staid television cooking show called “Supper at Six.” But she isn’t going to smile and read the cue cards. Zott ad-libs her way into a role that suits her, treating the creation of a stew or a casserole as a grand experiment to be undertaken with utmost seriousness. Think molecular gastronomy in an era when canned soup reigned supreme. Baked into each episode is a healthy serving of empowerment, with none of the frill we have come to associate with that term.

In addition to her serious look at the frustrations of a generation of women, Garmus adds plenty of lighthearted fun. There’s a mystery involving Calvin’s family and a look at the politics and dysfunction of the local television station. There’s Zott’s love affair with rowing and her unconventional approach to parenthood and her deep connection to her dog, Six-Thirty.

Still, beyond the entertaining subplots and witty dialogue is the hard truth that, in 1961, a smart, ambitious woman had limited options. We see how a scientist relegated to the kitchen found a way to pursue a watered-down version of her own dream. We see how two women working in the same lab had no choice but to turn on each other. We meet Zott’s friend and neighbor, Harriet, who is trapped in a miserable marriage to a man who complains that she smells.

“Lessons in Chemistry” may be described with one or all of my verboten words, and it might end up shelved in that maddeningly named section “Women’s Fiction,” which needs to go the way of the girdle. To file Elizabeth Zott among the pink razors of the book world is to miss the sharpness of Garmus’s message. “Lessons in Chemistry” will make you wonder about all the real-life women born ahead of their time — women who were sidelined, ignored and worse because they weren’t as resourceful, determined and lucky as Elizabeth Zott. She’s a reminder of how far we’ve come, but also how far we still have to go.

“Where’d You Go, Bernadette,” by Maria Semple. You can’t get to know Elizabeth Zott without waxing nostalgic about Bernadette Fox, the original tortured, inscrutable, cynical yet vulnerable protagonist who couldn’t care less what you think. If you haven’t read this book by now, we definitely aren’t friends. Sorry, the movie doesn’t count; equating the two is like forfeiting a trip to Italy because you’ve eaten a can of SpaghettiOs.

“Lab Girl,” by Hope Jahren. Interested in reading a more hopeful — and true — account of a woman in science? Start with this memoir from a professor of geobiology who’s now at the University of Oslo. Our critic called it “a gifted teacher’s road map to the secret lives of plants — a book that, at its best, does for botany what Oliver Sacks’s essays did for neurology, what Stephen Jay Gould’s writings did for paleontology.” (Jahren also gets props for showing “the often absurd hoops that research scientists must jump through to obtain even minimal financing for their work.”)