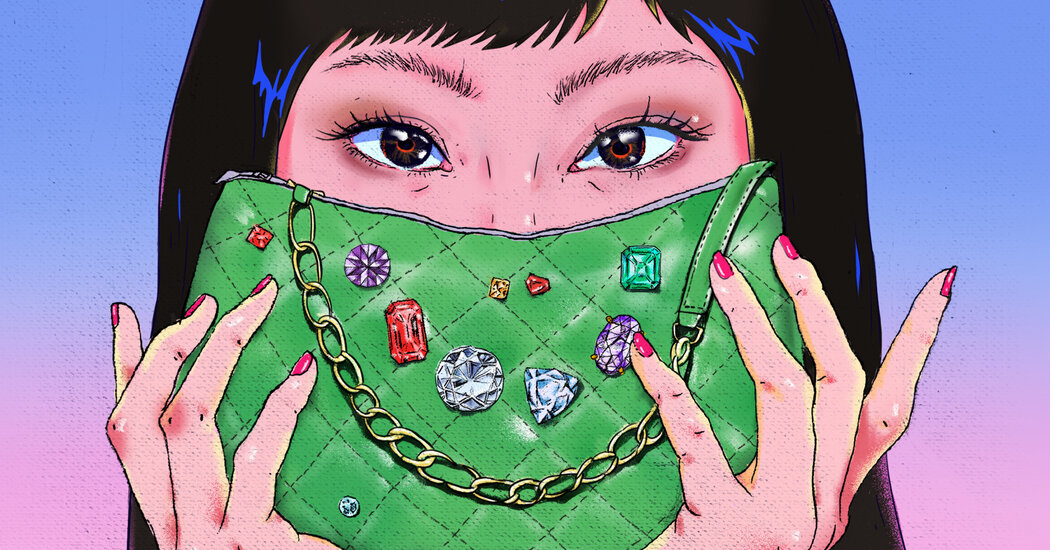 Yes, “Counterfeit” is a caper story. But it’s also a tale of two friends and their frustrations with the roles they’ve been assigned.

At face value, Kirstin Chen’s new novel, “Counterfeit, ” is easy to sum up: Ava Wong, a strait-laced Chinese American lawyer, reconnects with her enigmatic college roommate, Winnie, and becomes entangled in a scheme that involves importing counterfeit luxury handbags. When trouble arises, Winnie disappears, leaving Ava to deal with the consequences. Seemingly, what you see is what you get — a con artist story, a pop-feminist caper, a fashionable romp. Fun! Pass the popcorn. Except nothing in this novel is what it seems.

Make no mistake, “Counterfeit” is an entertaining, luxurious read — but beneath its glitz and flash, it is also a shrewd deconstruction of the American dream and the myth of the model minority.

The novel begins as a conciliatory first-person narrative. Ava is midinterrogation, speaking to a detective whose voice we never hear. It is an one-sided conversation, an apparent confession. Her defense leans upon well-worn Asian stereotypes about hard work and family values. She attributes her current predicament to her innate sense of drive — “What can I say, Detective? You don’t earn straight A’s all your life without being uncommonly competitive” — and being raised in a culture fixated on image, reputation and honor, which “must be fought for plus preserved at all costs. ”

Ava blames her upbringing for her lack of agency in decision-making: “It was easier and less risky to vanish into the image that my parents — and the world — had of the good Chinese language American daughter. ”

A reader can’t be faulted for being swept up in Ava’s narrative, for sympathizing along with her plight, even rooting for her acquittal. Halfway through, one might assume this novel’s most pressing question is whether Ava will get away with her misdeeds. This would be fine — but , thankfully, the second half of the book obliterates that assumption.

Winnie’s voice enters the story at the midpoint, shining a stark light on the eccentricity of the previous section. We’re suddenly privy to someone’s inner thoughts and feelings; suddenly, we realize we’ve been fed a monologue. Quotation marks appear for the first time.

Readers love a twist and I won’t spoil this one by revealing too much, but Chen is up to something innovative and subversive here. She uses the device to flip Asian and Asian American stereotypes inside out and upside down. She plays on biases, both conscious and unconscious. Now that more of the picture is colored in, we have to re-evaluate Ava’s pandering defense; it becomes a subversive act, a reclamation of power. She has played on the detective’s (and the reader’s) unconscious (or conscious) bias. She used a stereotype to her advantage.

If you haven’t figured it out by now, Ava plus Winnie have an ax to grind. They are unruly and unapologetic, stopping at nothing to get what they want. In this way, they are quintessentially American with characteristically American dreams. This is Chen’s real subject — if I dare use the word “real” anywhere near this novel.

The American ideal is a life of material prosperity and comfort, but equal opportunity is insincere, feigned. Counterfeit. So can all of us blame Ava for feeling entitled to, as Winnie puts it, “a life of wealth and delight and adventure, a life she’d been promised if only she worked hard enough and followed the rules and never, ever slipped up”?

Before Winnie reappeared in her life, Ava had obeyed the rules. “She’d gone to the right schools, chosen the right career, married the right partner, formed the right family — and made enormous sacrifices in the process, and yet here she was, thoroughly miserable, horrified by the prospect that the girl entire existence had been built on lies. ”

You can decide for yourself whether “Counterfeit” is a tale of genuine American gumption or not. Either way, you must grapple with the question: If the dream itself is a false promise, why not achieve it via fakery?

Camille Perri is the author of “The Assistants” and “When Katie Met Cassidy. ”