Andrew Holleran’s Work Has Traced the Arc of Life. Now, He Takes on Death. – The New York Times 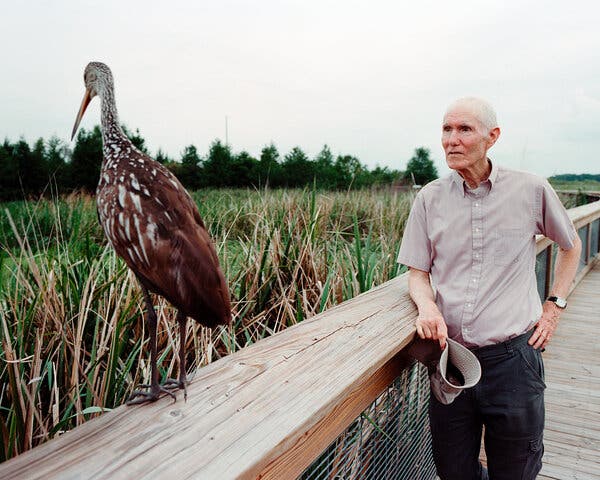 Death has always been on Andrew Holleran’s mind.

It loomed over the shame and hedonism of “Dancer From the Dance,” his 1978 debut novel and one of the most famous works of gay literature, and has pervaded his books since: a small body of work traces the arc of life.

At 77, and releasing his first novel in over 15 years, Holleran feels as though he has reached “the end of the arc,” he said in a recent interview. So it’s appropriate that in “The Kingdom of Sand” — out Tuesday from Farrar, Straus & Giroux — death is the subject.

“But isn’t everyone obsessed with death?” Holleran, whose real name is Eric Garber, asked during a video call from his home near Gainesville, Fla. “We all think about the transitory nature of life.”

“The Kingdom of Sand” follows a natural thematic progression for him. After “Dancer” came the ambivalent adulthood of “Nights in Aruba” (1983), the AIDS crisis loneliness of “The Beauty of Men” (1996) and the parental loss of “Grief” (2006). Now, Holleran has written a novel preoccupied with twilight and letting go, while doubling as a portrait of place, assembled from sketches of life in Florida. At its core is the account of a late-in-life friendship between the unnamed narrator and an elusive older man named Earl, whose protracted death takes up the bulk of the book.

If “Grief” was a farewell to the generation of Holleran’s parents, said Will Schwalbe, Holleran’s editor, here, “there’s this feeling that we’re up next.”

Few have examined loss with the lyricism and sensitive observation that have been hallmarks of Holleran’s novels. Larry Kramer, the author and prickly luminary of AIDS activism who died in 2020, once called him the Fitzgerald and Hemingway of gay literature, “but for one thing: He writes better than both of them.”

That’s an opinion most likely to come from a gay reader, though. Critics and publishers, often with more than a whiff of homophobia, were slow to acknowledge and appreciate chroniclers of gay life like Holleran. As recently as “Grief,” a reviewer for The New York Times wrote that his books “can seem so determined to speak for their disenfranchised gay characters that the works become inaccessible to anyone else.”

Holleran — unlike, say, Truman Capote or Gore Vidal in the generation before him — has never tailored his writing to a straight audience. Fire Island culture is described without context; camp and cruising are a given. But his works are inarguably literature, said Tony Kushner, the “Angels in America” playwright.

Beyond the “clarity that lives alongside a musicality” in Holleran’s novels, Kushner said, is a universality redolent of Fitzgerald, as Kramer claimed.

“Fitzgerald is also a writer about loss; there’s this sense with both of people inhabiting something that’s already disappeared,” he said. “One of the first things I remember about ‘Dancer From the Dance’ is that it lands on the notion that all of us are self-invented people, and that behind that is a difficult and somewhat concealed past, as if in coming out there’s a reverse closeting that’s very Fitzgeraldian.”

Even if that point hasn’t always registered with a wide audience, Holleran has meant an immense deal to gay people, of all ages. It’s not unusual to see a Fire Island neophyte clutching a copy of “Dancer” on the ferry from Sayville, N.Y., as if reading it were a rite of passage.

“Andrew really is the standard-bearer of taking all of our wayward contemporary gay desires and internal melodramas and making them not only legible but beautiful,” said William Johnson, the program director of PEN Across America and the former deputy director of Lambda Literary. “I think that is why young folks are still so drawn to him and his work. It is his ability to make our ‘gay’ feelings so evocative.”

Holleran didn’t set out to establish such a reputation. The material of “Dancer” arose from a moment of frustration. By his late 20s, he was an M.F.A. graduate with one published story to his name. “You’d better quit now and get a real job,” he recalled thinking. But at the time, he was away from New York City for a stretch and writing “really campy” letters to a friend there; “Andrew is a master of the art of a letter,” Schwalbe said.

From that correspondence, themes emerged: elegiac thoughts about gay life and desire. And a version of those letters became the epistolary framing for the novel, which came together in only three months. (“Now,” Holleran said, “it takes forever.”) He didn’t think much of the finished product, but one day, when he was back in the city at the West Side YMCA, Kramer approached him and said, “I heard you wrote a book,” and offered to give it to his agent.

Before “Dancer” was published, Holleran adopted the nom de plume he uses to this day. “I didn’t care who knew I was gay,” he said, “but I worried about my parents.” The last name came first, from an old school acquaintance; and Andrew was a boy he used to visit because of his “fabulous comic book collection.”

“Dancer” was released the same year as Kramer’s brazen satire, “Faggots”; both were cautionary tales about the moth-to-flame nature of gay nightlife, and both reach their climax on Fire Island. But where Kramer was polemical, Holleran was poetic — more quietly political, Kushner said, but political nevertheless as a pioneer in literature for a post-Stonewall age.

“I don’t believe that Larry’s work was inferior in any way,” Kushner continued, “but in ‘Dancer’ there’s a certain sense of confusion about how a community is formed out of this particularly crooked timber of humanity, which I think was a big question back then.”

Holleran was surprised by the attention that the book received. Today, Johnson said, it amounts to “our ‘Catcher in the Rye,’ the book you read when you’re young.” But since its publication, Holleran has been more talked about than seen. Widely described as likable, quite funny and seemingly immune to literary feuds, he is also intensely shy. He was relieved to learn that the pandemic would limit the amount of publicity he’d have to do for “The Kingdom of Sand.”

Edmund White, a fellow elder statesman of gay literature — and, like Holleran, a member of the Violet Quill, an informal collective during the 1970s — called him “rabbity.” “He’ll kind of appear and then disappear,” White added. “And if you get too close to him, he gets kind of nervous. In New York, he was very much part of the Fire Island scene, and I used to see him years ago at the gay baths. But he wouldn’t be having sex; he would just observe.”

Over the decades, Holleran dipped in and out of the city, on his terms. His family had moved to Florida in the early 1960s, to the small town outside Gainesville where he lives now. “We never understood why my father chose this place,” he said. “But I’ve been here off and on ever since. It’s a long time; for Florida, that’s like three ice ages.”

He had also built a life as a writing teacher at American University in Washington — “a very married city,” as he described it, where he mostly just went to the National Gallery of Art and the gym — but the pandemic has lately kept him limited to Florida. He could have left permanently at any time before that, but never did. Writing “The Kingdom of Sand,” he said, was something of an exercise in figuring out a reason.

“I don’t think the book tells me why,” Holleran said. “But I couldn’t quite sever the ties.”

In the novel, he conjures the flatness of Florida and remarks that you know you’ve been in the state too long when “you no longer go to the beach.” It is also an environment that he portrays as marked by decay. He refers to Gainesville as a “city of hospitals, nursing homes, and crematoria.” We live on, he said, as the things we give away, like a lamp of Earl’s that takes on the role of a memorial.

Amid those observations, Holleran’s protagonist reckons with the bodily changes of old age. These characters, he said, are “post-sex.” Instead, they mostly watch movies. Death, in the case of Earl, can be a banal, slow decline. There is a uniquely gay shame in relying on the help of others, yet worrying that an unreturned call from a handyman is an act of homophobia.

“What drives me in what I write,” Holleran said, “is to write the thing that is not being said. You always want to write a book where you get everything out. But the downside of that is, what do you do next?”

It’s possible that life’s arc extends beyond “The Kingdom of Sand.” Holleran said he’s “neither that old nor young.” And if there’s more to write, it’s about the pleasure, rather than the pain, of his age.

“Of course there’s panic, and serious thinking about how to die,” he said. “But there’s also the desire to remain in life and continue enjoying its wonders. It’s a combination of high anxiety and tranquillity — and pleasure in small things.”