An 8-Year-Old Wrote a Book and Hid It on a Library Shelf. It’s a Hit. – The New York Times 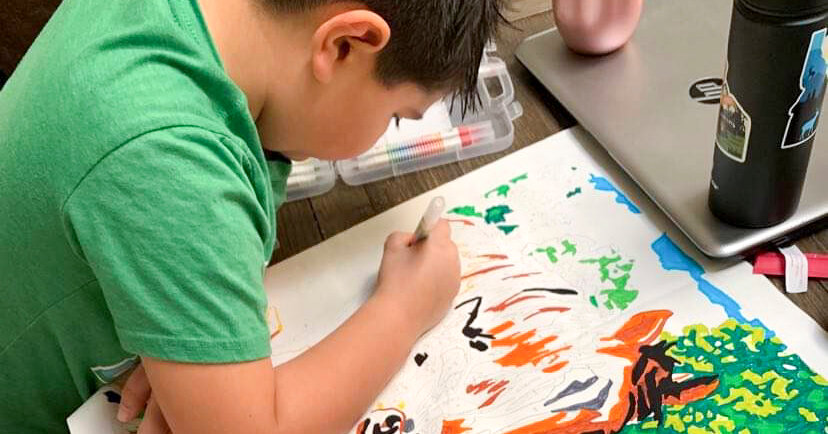 Dillon Helbig, a second-grader from Idaho, wrote an 81-page book about his “Crismis” adventures. Now other children want to write stories.

During his Christmas break, Dillon Helbig, an 8-year-old boy from Boise, Idaho, wrote a book that he wanted everyone to read.

He had spent a long time on it — four days to be exact — and filled 81 pages of an empty journal with a richly illustrated tale about how he gets transported back in time after a star atop their Christmas tree explodes.

But he did not have a book deal. (He’s only in second grade, after all. ) So when his grandmother took him to the Lake Hazel branch of the Ada Community Library in Boise at the end of December, he slipped the sole copy of his book onto a shelf containing fiction titles.

“I had to sneak past the librarians, ” said Dillon, who says “li-berry” instead of “library. ”

Over the next month, a series of circumstances made the book one of the library’s most sought-after titles and also inspired children in Boise to write their own stories.

The book, “The Adventures associated with Dillon Helbig’s Crismis” by the author “Dillon His Self, ” had drawn so much attention by the end of January that 56 people were on the waiting list to check it out, said Alex Hartman, the manager of the library branch.

If every person kept the book for four weeks, the maximum borrowing time, the last person around the list would have to wait more than four years to read Dillon’s tale.

Here’s how it happened:

The night after Dillon surreptitiously left his book on that library shelf, he came clean to his parents, his mother, Susan Helbig, said. They called the library, thinking they could pick it up from the lost plus found. But the librarians were so charmed by the guide that they played along with Dillon’s stunt.

“It deserves a spot on our library shelves, ” Mr. Hartman said on Monday. “It’s a good story. ”

The particular librarians entered the book in their catalog system, but left the publisher category blank, he said. They also moved it out of the fiction section and set it alongside the graphic novels, since it has so many page-length illustrations.

As for the amount of spelling and grammar errors in the book, “I would say those would be numerous, ” he said.

For example , inside “Chaptr 1, ” Dillon writes, “ONe Day in wintr it wus Crismis! ”

In his “Crismis” tale, Dillon, the protagonist and the author, goes on a time-traveling adventure after the star on the tree explodes.

“Santa comes, ” he said, explaining the next part of the plot. After that, Dillon comes across five trees, and one of them “was like a tree portal. ”

The portal takes him back in time to the “ first Thanksgiving ” in 1621, a date that he had to confirm with his mother, Ms. Helbig said.

“His imagination is just incredible, ” she said.

Dillon has been writing “comic-style books” since he was 5, his mother said, yet this one is certainly his most successful. The library gave him its first-ever “Whoodini Award” for best young novelist, an award they created for him.

“It’s been quite the whirlwind, ” Ms. Helbig stated.

After news of Dillon’s literary triumph was reported in The month of january by The Idaho Press and KTVB , a television station in Boise, his classmates told him that he had inspired them to write their own books.

“They said, ‘It was really cool; I wish I was you, ’” this individual said.

Children have also told Mr. Hartman, the library manager, that they, too, want to write books for the library. A local author, Cristianne Lane, has offered to work with Dillon to create a children’s writing workshop at the branch.

In addition to the workshop, other big things could be ahead for the young author: Publishers have contacted the library regarding officially publishing the guide, Mr. Hartman said. The particular librarians are also planning to make extra copies of the book.

“We hope that others kids are inspired by Dillon to share their stories, ” Mr. Hartman said.

Ms. Helbig said that, amid all the attention her son has received, he has decided he wants to become an author.

But he has other plans, too.

Before he reaches middle age, Dillon has exciting plans for a sequel: “My next book, ” he said, “is going to be called ‘The Jacket-Eating Closet, ’ based on actual events. ”