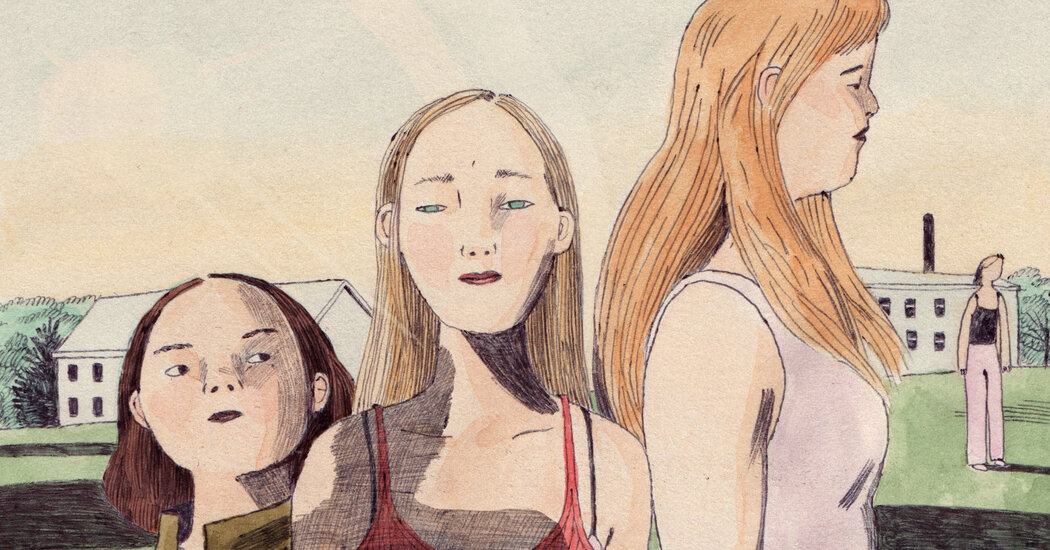 Stewart O’Nan opens his new novel, “Ocean State,” with this grabby narration by one Marie Oliviera: “When I was in eighth grade my sister helped kill another girl.” It almost sounds as if he’s about to launch into one of those contemporary twisty thrillers, but what he does with this quick sketch of a plot is far more interesting and enduring.

It’s 2009, and the Oliviera family of three has moved yet again, to a long-empty house in Ashaway, R.I., across from the Line & Twine, the town’s shuttered mill. This new rental has bedrooms for both Marie and her older sister, Angel — but for Marie, that’s not a good thing. Marie idolizes everything about Angel. The way she’s funny and can do spins on roller skates. How she’s tall, pale and like their mother, Carol, was, a bombshell. Marie favors their part-Portuguese father, Frank (the outsider in his own sad divorced dad apartment), and describes herself as chubby and klutzy. Carol promises that she’ll find her own special talent, but Marie is skeptical.

“My mother’s talent was finding new boyfriends and new places for us to live,” Marie tells us. Both the places and the men are trending downward, but no matter who the men are, they aren’t good for the girls. Marie’s vivid, precise portrait of Carol in love: “She lost weight and kissed us too much and made promises she couldn’t keep.” The new boyfriend, Russ, a firefighter, is old and reminds Angel of Papa Smurf. The last one, Wes, necessitated a 911 call and yet isn’t entirely out of the picture. The girls literally sniff Carol’s sheets, carnal detectives.

Narratively, O’Nan mounts a defense for Carol, showing how she’s tender and attentive at her nursing job, following her as she frets about her girls. Still, she is unable to stop chasing the last vestiges of her own youth.

As if in opposition to her mother’s perceived flightiness, Angel has been steadfastly committed to her rich, guitar-strumming boyfriend, Myles Parrish, for three years. “Myles was her first. Myles is her only.” When Angel visits his family at their summer house just up the coast, helping them with chores like putting out the flags on the deck — O’Nan’s eye for tiny details is exquisite — she feels a fleeting pride of ownership. However, Myles will go to college next year and then, “she knows she’ll lose him to some rich girl and there’s nothing she can do.”

In the fall of 2009, though, the girl threatening their relationship isn’t rich at all. Birdy Alves is a petite high school senior who works at the local D’Angelo (a New England chain of sandwich shops), lives with her widowed mother and gets good grades. She has a boyfriend, but all she wants is Myles. When we see them together in their first hookup at the empty summer house, Birdy is aware that she can’t be the first girl he brought there, but melts when he “pushes his hair from his face like Keanu.”

Every text is a thrill, every wait between communications is torture. When Birdy is kissing Myles on the head or briefly “allowed to hang on his arm” like a real girlfriend, O’Nan takes us right into the disorienting ecstasy of young love. Myles is the least explored character in the novel; still, it’s clear he’s not worth either of these girls’ time, let alone their lives.

The spoiler is in that first sentence, but when Birdy has said goodbye to her family dog, a cocker named Ofelia (oh the details!), and headed off to her fate, a light goes out. We become mourners while O’Nan turns his narration to the investigation, to due process and family wreckage.

Whatever the genre he’s playing with — this is his 20th book (not counting novellas and collections) — O’Nan is an enticing writer, a master of the illuminatingly mundane moments. In “Henry Himself” (2019), a prequel to the Maxwell family series he started with “Wish You Were Here” in 2002, the climax, such as it is, features a family gathering for a chore, the dismantling of an unneeded rooftop television antenna. But in a broader sense, he’s there for the societal crumbling, whether it be a seemingly safe middle-class family like the Maxwells, diminishing from one generation to the next, a business closing (“Last Night at the Lobster”), another young murderer’s life story (“The Speed Queen”) or the Alves and Oliviera families falling apart; part of Marie Oliviera dies that fall when she loses both her innocence and her sister as her constant.

In “Ocean State,” O’Nan is subverting the thriller, borrowing its momentum to propel this bracing, chilling novel. Whereas thrillers tend to use murders as a prurient jumping-off point, the entryway to the reader’s pleasure — that chance to play Columbo or Kinsey Millhone in our heads — O’Nan takes his time, humanizing this story to make the hole where the victim was suitably substantial. Highly specific to the landmarks of the real Ashaway, but ringing with the universal, “Ocean State” is a map for the emotional dead ends of America, where kids kill other kids over seemingly nothing. O’Nan understands that at least in the moment, it is for everything.