9 New Books We Recommend This Week – The New York Times 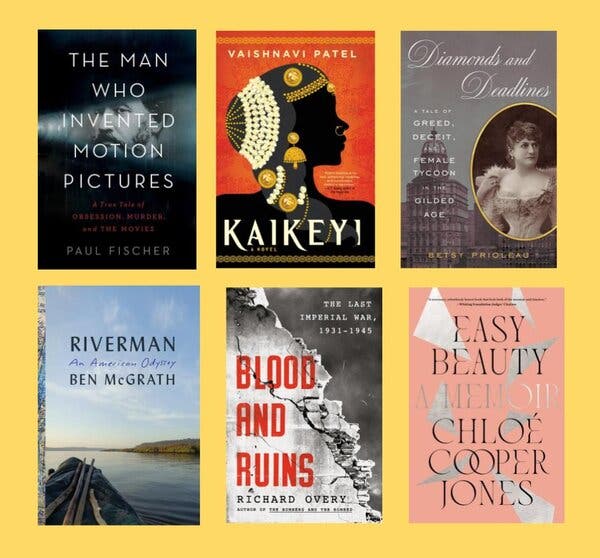 From an atmospheric spy thriller to a wide-angle history of World War II to the missing people at the center of Ben McGrath’s “Riverman” and Paul Fischer’s “The Man Who Invented Motion Pictures,” mysteries and adventures loom large in this week’s recommended titles. There’s family drama, by way of Gina Sorell’s novel “The Wise Women,” and colorful historical scandal, by way of Betsy Prioleau’s biography “Diamonds and Deadlines,” and royal chaos by way of two different books: Tina Brown’s account of the Windsors, “The Palace Papers,” and Vaishnavi Patel’s novel “Kaikeyi,” which updates the Hindu “Ramayana” from the queen’s perspective. Finally, we also like Chloé Cooper Jones’s spirited debut memoir, Easy Beauty.” Happy reading.

THE PALACE PAPERS: Inside the House of Windsor — the Truth and the Turmoil, by Tina Brown. (Crown, $35.) Brown, the English-born, Oxford-educated former editor of Tatler, Vanity Fair, The New Yorker, Talk and The Daily Beast, here dishes on the increasingly wobbly contours of the British royal family. “‘The Palace Papers’ isn’t juicy, exactly, nor pulpy — there’s just not enough new extracted from the whole royal mess,” our critic Alexandra Jacobs writes. “It’s frothy and forthright, a kind of ‘Keeping Up With the Windsors’ with sprinkles of Keats.”

THE MAN WHO INVENTED MOTION PICTURES:A True Tale of Obsession, Murder, and the Movies, by Paul Fischer. (Simon & Schuster, $28.) Part true crime, part film history, this engaging book investigates the life and unsolved disappearance of Louis Le Prince, the man who made “The Roundhay Garden Scene,” a two-second clip filmed in 1888 that’s widely acknowledged to be the first known movie, before vanishing in France on a train journey from Dijon to Paris. (His wife thought Thomas Edison may have been involved.) Fischer “lays out his case meticulously and with many footnotes, though he takes pains to entertain,” Leah Greenblatt writes in her review. “The final pages offer, if not hard conclusions, a bittersweet postscript and even real catharsis — too late for Le Prince, maybe, but some kind of justice nonetheless.”

DIAMONDS AND DEADLINES:A Tale of Greed, Deceit, and a Female Tycoon in the Gilded Age, by Betsy Prioleau. (Abrams, $30.) Prioleau brings enjoyable gusto to this biography of Mrs. Frank Leslie, a media baroness in the Gay Nineties whose past was filled with hidden drama and whose public life was awash with scandal and contradiction. But the real star of the book is Gilded Age New York in all its excess, right down to a monkey in a tux. As Joanna Scutts puts it in her review, the complicated Leslie “is no heroine, no role model, no rebel. For all that, her story sparkles, as intoxicating as a champagne fountain that somebody else is paying for.”

KAIKEYI,by Vaishnavi Patel, read by Soneela Nankani. (Red Hook, audio, $26.98.) The ancient Hindu epic the “Ramayana” gets a new interpretation in this debut, told from the perspective of the eponymous, oft-vilified queen. “Though written in prose, ‘Kaikeyi’ is told in a pared-down style similar to that of its poetic source material, and lends itself well to an audio format,” Sebastian Modak writes in his latest audiobooks column. “But on top of what came before, Patel brings a contemporary lens that will be familiar to any woman who has been labeled cold for showing assertiveness. … Like the best stories, this engaging portrait will move you to take another look at the things you think you already know.”

THE BERLIN EXCHANGE,by Joseph Kanon. (Scribner, $28.) The subtle power moves and ever-shifting alliances of the Cold War era come alive in this tale about Martin Keller, a disillusioned former spy who’s adjusting to the suspicion, hypocrisy and relentless grayness of life in East Berlin. After a languorous start, the plot shifts into high gear and turns into a complex, high-stakes operation. “Martin once believed he was working for the greater good, but now wonders whether any side is worth his loyalty,” Sarah Lyall writes in her latest thrillers column. “East Berlin is no Communist paradise, but a joyless city swarming with agents, informants, freelance assassins and journalists with shady side hustles. … Martin, thrillingly, is pulling all the strings. He’s one step ahead of his enemies, and three steps ahead of us. Whether his plan will succeed is another question.”

RIVERMAN:An American Odyssey,by Ben McGrath. (Knopf, $29.) McGrath’s first book elegantly relates the true story of Dick Conant, a troubled and charismatic man who disappeared on a long-distance canoe trip from New York to Florida. McGrath paints him as a “waterborne Don Quixote” and a classic American folk hero. I reviewed this one myself. “If the missing-person element provides the current that sweeps ‘Riverman’ forward, the book amounts to much more,” I wrote: “a portrait of forgotten American byways and the eccentric characters who populate them, a cursory history of river travel in America and, not least, an effort to solve the riddle of Conant himself — not only his whereabouts but also his elusive and irresistible nature.”

THE WISE WOMEN,by Gina Sorell. (Harper/HarperCollins, $26.99.) In this wry novel, the newly retired author of a long-running magazine advice column called Wise Words turns her dated, unsolicited expertise on the lives of her two daughters. Delightful chaos ensues. “Real-life issues are dealt with here — infidelity, gentrification, regret, affordable housing, aging — but because of the bright prose and offbeat cast, I was never too worried,” Jennifer Close writes in her review. “This world is funnier and friendlier than our own; it’s a place where drama is offset by absurd family dynamics and housing crises are avoided with madcap solutions. I was always happy to return.”

BLOOD AND RUINS:The Last Imperial War, 1931-1945, by Richard Overy. (Viking, $42.) Overy’s achievement in this fresh examination of World War II is to weave together all the subplots of a planetary tapestry into one prodigious account of the largest event in human history. The book “dissects the sinews of war with the sharpest of scalpels,” Josef Joffe writes in his review. “With myriad facts, it is not for the night stand, where it must compete with Netflix. But it is history at its best, down to the finest points culled from a dozen archives around the world.”

EASY BEAUTY:A Memoir, by Chloé Cooper Jones. (Avid Reader, $28.) In her gorgeous, vivid first book, Jones writes about living with sacral agenesis, a physical condition that gives her “a body that could never be mistaken for symmetrical.” As she rejects the dismissive gaze of others, Jones shows how she stands in the light of her own extremely able self. “Jones concisely sketches her family, childhood and adult life, but she also chronicles a series of adventures,” Kate Tuttle writes, reviewing the book alongside two other memoirs. In the absence of traditional beauty, “she long believed that the only way to deserve anyone else’s respect, much less desire, was to ‘be extraordinary in all other aspects,’ brilliant and witty and humorous and cool. If the book is any proof, Jones is all these things.”