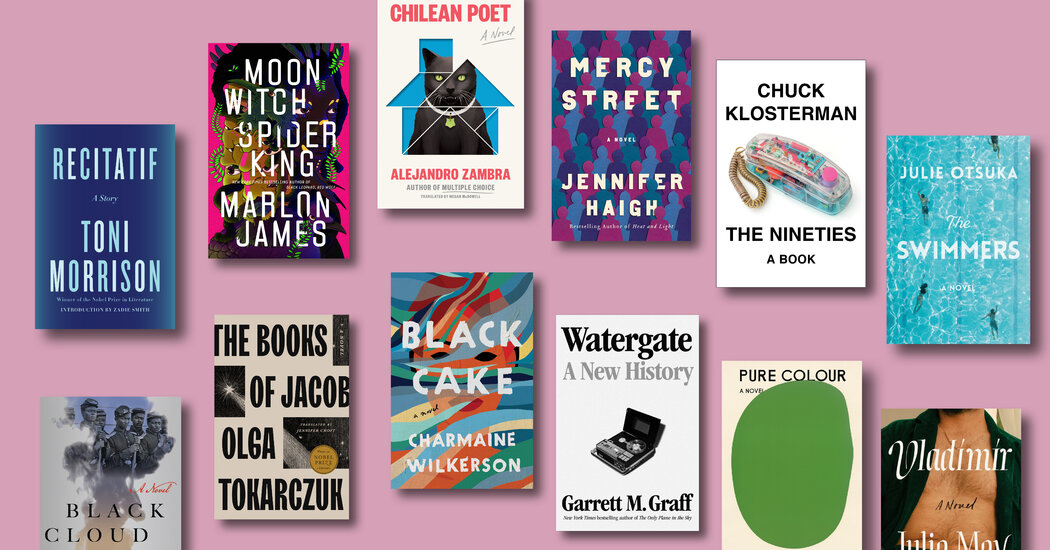 In this debut, an estranged brother and sister reunite after their mother’s death. Her final wish for them? “I want you to sit down together and share the cake when the time is right. You’ll know when.” Before the novel is over, they will revise almost everything they knew about the family.

During the Civil War, thousands of formerly enslaved men joined the fight against Confederate forces. This novel imagines the life of one of those soldiers, Richard Etheridge, the son of a Black woman who was enslaved by his father.

‘The Books of Jacob,’ by Olga Tokarczuk. Translated by Jennifer Croft. (Riverhead, Feb. 1)

First published in Polish in 2014, the novel is inspired by the true story of Jacob Frank, an 18th-century Jewish mystic. Over 900-plus pages, Tokarczuk, who was awarded the Nobel in 2019, chronicles the life and times of Frank and his followers as he crosses Europe, where he is welcomed as a messiah in some parts and derided as a charlatan in others.

Zambra draws on Chile’s long literary tradition — Pablo Neruda, Roberto Bolaño and others — in this story of Gonzalo, his stepson Vicente, and the many ways poetry affects their lives.

Four lives converge at a women’s health clinic in Boston as anti-abortion rhetoric ratchets up. For Claudia, a longtime employee, the presence of protesters outside the office is nothing new, but as their demonstrations become more unnerving and her personal life becomes even more unfulfilling, she tamps down her anxiety with marijuana. The novel leaps from her perspective to those of her dealer and two of his other customers: a gentle, lonely man who looks for community at a local church and online, and a virulently misogynistic anti-abortion activist.

The second installment in James’s fantasy epic trilogy, this book focuses on Sogolon the Moon Witch, one of the main characters in “Black Leopard, Red Wolf.” She tells her version of what happened in the series’ first volume as the book dives into her own origin story.

“Decades are about cultural perception, and culture can’t read a clock,” writes Klosterman, a journalist and cultural critic who has made pop culture and generational change his beat. In this book, he sets out to explain a decade that feels farther away than it really is, bookended by the fall of the Berlin Wall and Y2K anxiety.

Part parable, part creation story, this novel by the author of “Motherhood” and “How Should a Person Be?” is a philosophical meditation on love and the long reverberations of grief. Heti sorts individuals into three groups, according to their primary focus in life: aesthetic beauty, the well-being of society or devotional love to the people around them.

First published in 1983, this story follows the tangled, decades-long friendship between Twyla and Roberta, who meet as children at a shelter. Readers know one woman is Black and the other white, but Morrison conceals which is which. She later called it “an experiment in the removal of all racial codes from a narrative about two characters of different races for whom racial identity is crucial.”

In Otsuka’s third novel, a beloved local pool is abruptly shut down after the appearance of a crack across the bottom. One of the regular swimmers, Alice — who relied on her swimming routine to help stave off dementia — is overtaken by memories as her adult daughter tries to reconnect.

Graff, a journalist and historian, brings new perspective to the scandal that felled Richard Nixon, focusing on the former president’s enablers and the criminals in his outer orbit, as well as the whistle-blowers and investigators who helped bring the crimes to light.

A professor’s life is upended after former students accuse her husband — who also teaches at the school — of sexual misconduct. As the investigation into his behavior deepens, the professor wrestles her own infatuation with a younger colleague.