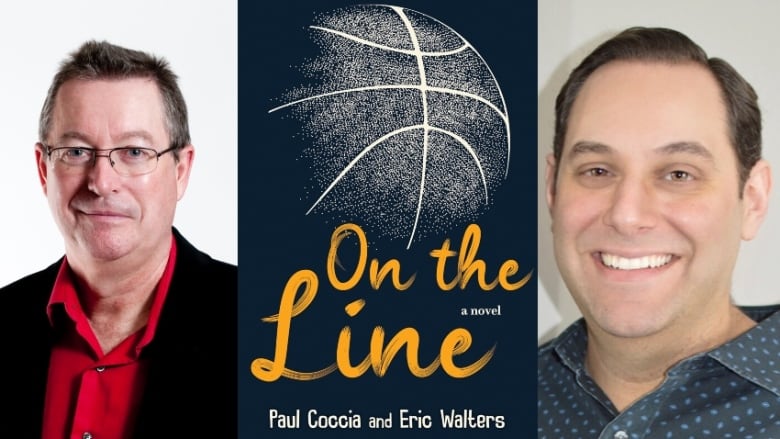 June is Pride Month in Canada! Check out this list of 12 books for younger readers and teens.

The middle-grade book On the Line is a middle-grade book about a 13-year-old basketball player named Jordan Ryker. When Jordan’s parents separate and his father announces he’s gay, Jordan feels lost and abandoned. But his new family situation also presents new ways at looking at the world. And with a championship game coming up — Jordan will need family more than ever.

Eric Walters is one of Canada’s most prolific and successful writers for young people. Inspired by reluctant readers when he was a grade five teacher, he decided to write them a story they couldn’t put down. Since then, he’s penned almost 100 books, including Camp X, The Power of Three and Run. He’s reaching more readers than ever: his 2006 novel We All Fall Down came in at #88 on the list of the bestselling 150 Canadian books of the past 10 years.

Paul Coccia is a YA author from Toronto. His debut YA novel Cub was published in 2019.

Set in the mid-2000s, The Queen of Junk Island is a YA novel about gender identity and trauma. A teen named Dell is staying at the family cabin for the summer after a traumatic event. But things take a turn for the worse when they discover the area is filled with trash left by the previous tenant and her mother’s boyfriend’s irreverent daughter has been invited to stay with them. But for Dell, the trip also becomes a time for self-discovery and uncovering past family secrets that come to light.

The Queen of Junk Island is for ages 16 and up.

Alexandra Mae Jones is a queer writer based in Toronto. Her short fiction has been published in several literary magazines, and she is a freelance reporter for CTVNews.ca. She is the 2020 Prairie Fire Fiction Contest winner.

You Know, Sex is designed to be a “modern sex ed book” for younger readers. Featuring vibrant illustrations and grounded around themes of social justice, the nonfiction book is a guide for navigating puberty and adolescence. You Know, Sex features chapters on body autonomy, disclosure, consent, puberty and reproduction that includes trans, non-binary, and intersex bodies.

Cory Silverberg is a Canadian author, educator and public speaker. The Toronto writer is the co-author of four books, including the ALA Stonewall Honor Book Sex Is a Funny Word and What Makes a Baby, both with Fiona Smyth.

Fiona Smyth is a Toronto-based painter, illustrator and cartoonist. Smyth was inducted into the Doug Wright Awards’ Giants of The North Canadian Cartoonist Hall of Fame alongside Alootook Ipellie in 2019. She teaches illustration and cartooning at OCAD U and the Art Gallery of Ontario.

Rabbit Chase is a middle-grade book that incorporates Anishinaabe culture with an Alice in Wonderland-type story. Aimée is an non-binary Anishinaabe student who travels on a school trip to meet with water spirits known as Paayehnsag. Aimée soon finds themself in an adventure featuring an alternate dimension, a Trickster and a Queen with robot guards who are trying to claim the land.

Elizabeth LaPensée is an Anishinaabe, Métis and Irish writer and illustrator whose work appears in Moonshot: The Indigenous Comics Collection series, Deer Woman: An Anthology and more.

KC Oster is an Ojibwe-Anishinaabe comic artist and illustrator. They live in the Rainy River District of Northwestern Ontario.

The adventure of non-binary teen Ciel and their friends continue in this latest YA book. Ciel is growing up and into their own — but the world is filled with challenges, including climate change, social media and complex relationships. When Ciel becomes romantically entangled with their best friend, they must cope with new questions about loyalty and identity.

Wish Upon a Satellite is for ages 13 and up.

Sophie Labelle is a trans cartoonist, public speaker and writer from Montreal. She is the creator of the webcomic Assigned Male and has illustrated several comic books.

Funny Gyal is a YA nonfiction book about the real-life story of Angeline Jackson, who stood up to Jamaica’s oppression of queer youth to demand recognition and justice. Jackson grew up knowing that she was attracted to other girls and explored her sexuality in her teens. But growing up in a conservative and religious household meant that she was often at odds with her community. Jackson gives a frank and honest account of her life and how she navigated her sexuality and spirituality along the way. Funny Gyal aims to inspire others to let them know that they are not alone.

Angeline Jackson is an LGBTQ+ human rights activist, an HIV/AIDS educator and the former executive director of Quality of Citizenship Jamaica. In 2015, President Barack Obama recognized Jackson as one of Jamaica’s remarkable young leaders at the Town Hall for Youth in Kingston, Jamaica. She also participated on a U.S. Senate briefing panel and attended the first White House Forum on Global LGBT Human Rights.

Susan McClelland is a YA nonfiction writer who spends her time between Toronto and Dumfries-Galloway in Scotland. Her first book, Bite of the Mango, is the true story of a young Sierra Leonean victim of war and has been published in more than 20 countries. She is a former staff writer at Maclean’s and has written for the Sunday Times, Marie Claire, Glamour, Ms Magazine, the Guardian, the Walrus and Chatelaine.

I Am Everything in Between explores gender identity, differences and stereotypes. The picture book is a celebration of youth and focuses on a positive and empowering message for those who want to be seen for who they truly are.

I Am Everything in Between is for ages 4 to 8.

Eighteen-year-old Sydney Sunderland is a writer and illustrator who grew up in the Comox Valley on Vancouver Island, B.C.

The Fabulous Zed Watson! features a non-binary lead character who embarks on “the literary scavenger hunt and road trip of a lifetime.”

When Zed discovers the legend of an unpublished novel called The Monster’s Castle, they join a small legion dedicated to uncovering the hidden text. Their adventure takes them on a road trip with their neighbour Gabe, a shy nature lover, and his sister Sam, a bossy geologist headed back to college. The trip isn’t easy — Gabe complains about the food, Sam won’t give up control of the stereo and Zed is often misgendered. But the group pulls together as they compete with a sneaky historian.

Basil Sylvester is a non-binary writer based in Toronto. Their father, Kevin Sylvester, is a broadcaster and the award-winning illustrator and writer of middle-grade books such as the Neil Flambé Capers series and the MiNRS space adventure series.

Both Sides Now is the debut YA novel by Canadian author Peyton Thomas. It’s about Finch Kelly, a teen who is on the high school debate team and dreams of a career as the first trans congressman. But when the annual national speech and debate tournament rolls around, Finch is worried about his odds of winning — all while having feelings for Jonah, his debate partner who happens to be gay and is already in a relationship.

Both Sides Now is for ages 14 and up.

Thomas is an author and freelance journalist from Toronto. His work can be seen in Pitchfork, Billboard and Vanity Fair. He was a 2016 Lambda Literary Fellow.

The Power of Style is a YA nonfiction book about the power of fashion. Christian Allaire is a Ojibway fashion and style writer for Vogue Magazine who has always had a passion for looking good. In The Power of Style, Allaire highlights the need for diversity and LGBTQ+ representation in fashion — and examines topics such as cosplay, make up, hijabs and hair to show the intersection of style, culture and social justice over the years.

The Power of Style is for ages 12 and up.

Allaire is an Ojibwe author who grew up on the Nipissing First Nation reserve in Ontario and is the fashion and style writer at Vogue. Christian Allaire won Canada Reads 2022, championing Five Little Indians by Michelle Good.

Jordan and Max, Showtime is an early chapter book about a boy who is having trouble at school and features themes of gender identity and belonging. On his first day of school, Jordan just can’t seem to fit in and prefers to stay under the radar. But when Jordan has to team up with a loud-mouthed boy named Max, Jordan just can’t keep from standing out. And with Max’s help, he might not have to any longer.

Jordan and Max, Showtime is for ages 6 to 8.

Suzanne Sutherland is a Toronto children’s book author and editor of books for young people.

Michelle Simpson is an Ontario artist and freelance illustrator with a focus on children’s publications.

The first in a series of books, Metatron’s Children is set in a world of magic. The book introduces readers to Yren, a pre-teen, non-binary Black child who has special extra-sensory powers. But Yren is coping with grief and guilt in the aftermath of their parent’s untimely death. Yren, with their sibling Augi, must use their powers to navigate a perilous new world.

Metatron’s Children is for ages 9 to 11.

Chy Ryan Spain is a multi-disciplinary artist, activist and educator based in Toronto. Metatron’s Children is Spain’s debut book.

Sydney Kuhne is an artist, actor and activist based in Toronto. Kuhne’s work centres around self-love, claiming identity, visibility, finding connection within the African diaspora and celebrating the sacred feminine.