10 New Books We Recommend This Week – The New York Times 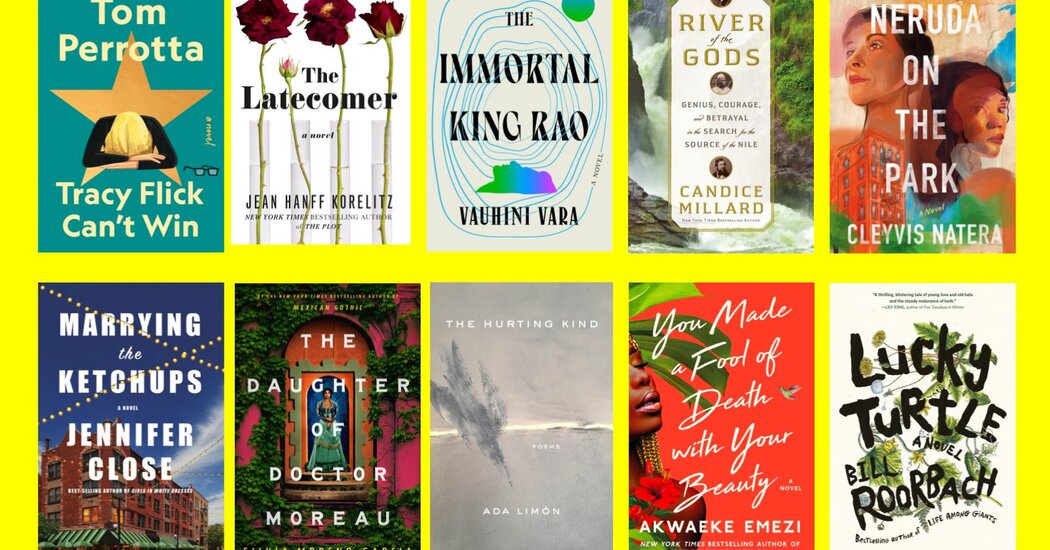 Technically, summer doesn’t begin for another week and a half. But, really, what is time? If the N.H.L. can decide that ice hockey is still in season (go, Rangers!), then surely we book lovers can cheat a little in the other direction and declare an early start to summer reading. The important part of that equation isn’t summer, anyway; it’s reading. So dive right in.

This week we bring you a beach bag’s worth of recommended titles, from Ada Limón’s smart new poetry collection to Candice Millard’s riveting true adventure tale about the 19th-century search for the source of the Nile, plus eight novels to suit any mood, from romance to horror to climate dystopia. Happy reading.

TRACY FLICK CAN’T WIN, by Tom Perrotta. (Scribner, $27.) Tracy Flick, the protagonist of Perrotta’s novel “Election” (1998), was immortalized by Reese Witherspoon in the film adaptation of the same name. She now returns, in a book that starts in the thick of #MeToo, when Tracy, now in her 40s with a daughter, wonders whether she has misjudged her own past. In the present day, Tracy’s boss, a high school principal, is about to retire, and Tracy must beat out other candidates to assume the job. “In middle age, Tracy’s optimism (or naïveté) is unchanged,” our critic Molly Young writes. “There are two ways to look at this. Maybe it’s a credit to her integrity that she hasn’t been squashed into submission. Maybe it’s preposterous that she refuses, after all this time, to play by the rules of the game. Even if the game is rigged. Even if she shouldn’t have to play it.”

THE LATECOMER,by Jean Hanff Korelitz. (Celadon, $28.) Korelitz’s sparkling novel has all the hallmarks of a beach read: a dysfunctional family (featuring test-tube triplets), a major plot twist, a house on Martha’s Vineyard. But the ambitious scope — and the exploration of race, class, politics, real estate and the art world — make this 448-page blockbuster a story for all seasons. “If this novel is funny, it is also cutting, a nearly forensic study of family conflict,” Allegra Goodman writes in her review. “‘The Latecomer’ is consistently surprising. Its protagonists reinvent themselves with astonishing ingenuity. Fair warning to readers seeking ‘likable characters’: The people here are fierce, and they fight dirty. The Oppenheimers dare you to love them — and even when you don’t, you cannot look away.”

THE IMMORTAL KING RAO,by Vauhini Vara. (Norton, $27.95.) The future is grim in Vara’s first novel: Climate collapse is ruining life on earth and a mega-corporation has replaced national governments. Largely to blame is the late King Rao, a Dalit Indian businessman whose rapacious rise and disastrous legacy are recounted by his daughter. “How to mediate between the competing interests of autonomy and collectivity, the desire for self-sovereignty and the reality of interdependence, is the major question this novel poses, over and over, at familial, societal and global scale,” Justin Taylor writes in his review. The book is “a monumental achievement,” Taylor adds: “beautiful and brilliant, heartbreaking and wise, but also pitiless, which may be controversial to list among its virtues but is in fact essential to its success.”

RIVER OF THE GODS:Genius, Courage, and Betrayal in the Search for the Source of the Nile, by Candice Millard. (Doubleday, $32.50.) A fast-paced account of the almost absurdly dangerous 19th-century quest by two friends turned enemies to solve the geographic riddle of their era. Millard, a graceful writer and careful researcher, shows how their formerly enslaved guide is one of the story’s true heroes. “Millard has earned her legions of admirers,” Edward Dolnick writes in his review. “She knows how to navigate a tangled tale” and, he adds, “takes pains to put her story in context.”

NERUDA ON THE PARK,by Cleyvis Natera. (Ballantine, $28.) In this earnest, provocative debut novel, a mother and daughter take different approaches to the impending gentrification of their Dominican neighborhood in New York City. “Natera’s style is refreshingly direct and declarative, and at its best, this approach feels confident and sharp, a mirror capturing the bleak comedies of life in a threatened community,” Mia Alvar writes in her review. “‘Neruda on the Park’ avoids pat answers, but tenderly and thoughtfully invites readers to weigh our own obligations to the places and people who made us.”

MARRYING THE KETCHUPS,by Jennifer Close. (Knopf, $28.) Welcome to Sullivan’s, a Chicago bar and restaurant run by a family (the Sullivans, naturally) where secrets, loyalties, resentments, baseball and beer are part of the DNA. Set in the wake of the 2016 election, Close’s propulsive and funny novel shows how politics are always close to home. “This dance between the personal and the political, and the way the latter impacts the former, is the most interesting thematic element” of the book, Liz Moore writes in her review. “The Sullivans are trying to hold the center, but increasingly, they’re finding that they can’t.”

THE DAUGHTER OF DOCTOR MOREAU,by Silvia Moreno-Garcia. (Del Rey, $28, to be published July 19.) This mesmerizing horror novel reimagines H.G. Wells’s “The Island of Doctor Moreau” in the Yucatán Peninsula. Moreno-Garcia immerses readers in the rich world of 19th-century Mexico, exploring colonialism and resistance in a compulsively readable story of a woman’s coming-of-age. “The imagination of Silvia Moreno-Garcia is a thing of wonder,” Danielle Trussoni writes in her Summer Reading horror roundup: “restless and romantic, fearless in the face of genre, embracing the polarities of storytelling — the sleek and the bizarre, wild passions and deep hatreds — with cool equanimity.”

THE HURTING KIND:Poems, by Ada Limón. (Milkweed, $22.) Again and again in this collection, her sixth, Limón confronts nature’s unwillingness to yield its secrets — it’s one of her primary subjects. The seemingly abundant wisdom of the natural world is really a vision of her own searching reflection. “Limón’s consolations are small but strong, and when her poems look to the future, it’s usually in the service of creating a connection in the here and now,” Craig Teicher writes in his review. “‘The Hurting Kind’ is packed with quiet celebrations of the quotidian. Limón looks out her window, walks around her yard, and, like Emily Dickinson, trips over infinities.”

YOU MADE A FOOL OF DEATH WITH YOUR BEAUTY,by Akwaeke Emezi. (Atria, $27.) This novel, the first romance of Emezi’s prolific and diverse career, features a widowed 29-year-old artist who unexpectedly finds love with an older chef facing an enduring sorrow of his own. “‘You Made a Fool of Death With Your Beauty’ is an unabashed ode to living with, and despite, pain and mortality,” our reviewer, R.O. Kwon, writes. “I love this book’s understanding of how tightly grief can tangle itself with elation, and how loss might elicit possession. It is also riotously, delightfully queer.”

LUCKY TURTLE,by Bill Roorbach. (Algonquin, $27.95.) Set in and around a youth rehabilitation camp in Montana’s Crow Nation, Roorbach’s latest novel — a love story between a 16-year-old blond girl and an older half-Taishanese man — draws a compelling portrait of wayward teenagers who are both too tough and too vulnerable for their own good. “Fans of Roorbach’s prolific work will appreciate his signature lyricism and sense of place, his sweeping narrative, humor and romance,” Gregory Brown writes, reviewing the book alongside two other coming-of-age novels. “New readers are walking into the hands of a skilled storyteller who’s not afraid to take on a big, messy tale of love, privilege and abuse.”